Brad Sparks’ entry provides no additional information that might shed more light on the subject.

The le is thin. It contains a newspaper clipping2 and a summary sheet of the sighting. The summary sheet is just data obtained from the story in the paper.

The story describes Carl Loar standing by his barn at 4:30 PM. He heard a jet plane y by and looked up into the sky. Loar saw “a faint glinting speck” and got his telescope to examine the object. Mr. Loar describes the object he saw as a “shining silvery sphere”, which was large and moved rapidly. He reported that two lights appeared on the side of the sphere and, shortly thereafter, there was an explosion of some kind, After the explosion, there was a cloud and approximately 100 specks of light. The sphere moved o into a cloud bank. The objects motion was from the north, to overhead, and, nally towards the west. The entire sighting was 30 minutes in length.

The newspaper article in the le shows a poor photograph of Loar with his telescope. One assumes that he was portraying how he observed the object. If this is accurate, it appears it was a hand held one to two-inch refractor with a narrow eld of view. These were often referred to as “spyglasses”. This kind of arrangement does not lead to stable observation and could give the mispercep- tion that there was rapid motion of the object. The motion may have been due to Loar not holding the telescope stable enough at high magni cation.

While Blue Book listed this as “unidenti ed”, the record card suggests a possible solution3. It makes reference to the “Hell Roarer” folder (Thanks to Curt Collins for deciphering the hand writing and providing the additional information about the aircraft).4 The “Hell Roarer” was an A/RB-26 invader aircraft that had a magnesium “torpedo” attached to the wing.5 The Magnesium was dumped into the tube and ignited. The resultant ame put out an incredible amount of light, which illuminated the ground below for night photography. The Magnesium lasted for about four minutes. While this was a very interesting possibility, this is not what the wit- ness described and there is a more likely source.

To me this sounds a lot like my observation last summer of a weather balloon re ecting the setting sun. I also saw it through a telescope and watched it burst into hundreds of specks of light. There are videos of weather balloons being observed through telescopes and bursting7, which can be found on-line. These videos, and my observation, bear a strong resemblance to what Mr. Loar described.

It had traveled towards the northeast and East-Northeast during its ascent (there are no wind directions after 7KM). It measured wind speeds between 40 and 48 knots during its ascent above 1KM. The last of the data was recorded at 8368 meters but that could have been due to the balloon being out of range or lost data. 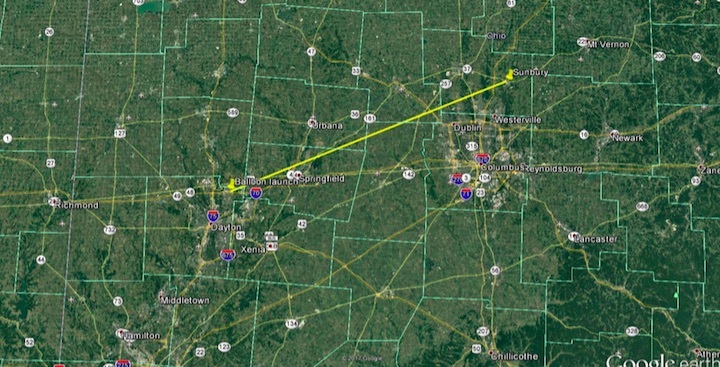 This plot shows that the azimuth from Dayton balloon launch point to Sunbury, Ohio. It is roughly 68 degrees, which is consistent with the 248 degree wind direction the weather balloon launched at 1600 recorded. The distance is about 62 nautical miles. There is some evidence that there were higher speed winds in the upper troposphere (above 4000m) based on 8 December 00Z (1900 EST) radiosonde measurements from Nashville, Peoria, Pittsburgh and Flint.9 All wind directions were from the west or southwest.

A search of documents from the period (1951) states that most weather balloons used during Operation Ranger burst above 16km.

On January 25, the rst of a series of maximum e orts was made without di culty. All subsequent maximum e orts were met satisfacto- rily. In order to meet time deadlines, ML- 391A balloons were used for daylight and nighttime observations, with total in ation weights in excess of 4000 g. Ascension rates of 450 to 490 m per minute were attained. Even with this excessive amount of hydrogen, most balloon bursts occurred above the 100-mb level (53,000 ft). Comparable results could not be obtained with ML-131 balloons during periods be- tween maximum e orts. 10

This report indicates that these balloons were overin ated, which means a normally in ated balloon might go even higher before bursting.

Ithink there is plenty of good evidence to suggest that a weather balloon was probably the source of this sighting. However, I am not positive that Dayton was the point of origin. An ascension rate of 200-500 m/min means it would have reached the 16 km altitude in about 30-80 minutes. The witness states his sighting happened around 1630, which is only 30 minutes after the sched- uled launch time from Dayton. During that time, the distance traveled probably would have been about half the 70 miles needed to reach Sunbury. This means the source of the balloon may have come from elsewhere or the balloon from Dayton had several variables (early release time, high wind speeds in the region above 4KM) that would allow it to reach the Sunbury area sometime around 4:30 PM. Of course, there are also variables associated with the witness testimony. The time of observation might have been 1645 or 1700 when he saw the object and he might have gotten his directions reversed, which would meant the object appeared in the south and disappeared in the east. Therefore, there is a possibility that the Dayton balloon was the source but it requires some assumptions, which we can not verify. The most important point is that his description is what one would expect from a weather balloon that had burst. Based on the information available, I would reclassify this case as a probable balloon.