PicSat will be launched into Earth orbit on 12 January 2018 to study the star Beta Pictoris, its exoplanet and its famous debris disk, thanks to a small telescope 5 cm in diameter. The nanosatellite has been designed and built in a record time of just three years by scientists and engineers at the Paris Observatory and the CNRS, with support from the Université PSL, the French space agency CNES, the European Research Council and the MERAC Foundation. 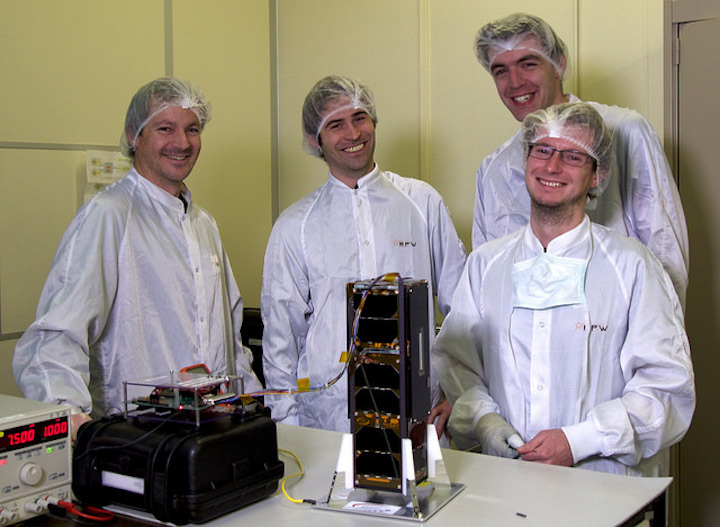 It is no bigger than three apples stacked upon each other, or rather three cubes, each 10 centimetres in size. It is not heavier than a cat (3.5 kg). It uses about 5 Watt of power, equivalent to that of an economical light bulb. Its telescope is only five centimetres in diameter, much like that of a young amateur astronomer. And yet, this nanosatellite seeks to improve our knowledge of the Beta Pictoris star system, a real “star” in the sky of the Southern Hemisphere.

Beta Pictoris lies merely 63.4 light years from the Earth. It is a very bright star, which makes it an easy target for study. This is quite fortunate, because with only 23 million years of age this star is very young astronomically speaking, and it has been a very popular object of study for scientists ever since the discovery in the 1980s of a massive disk of dust, gas and debris surrounding it. This disk, left-over from the gas cloud from which the star itself formed, is a rather rare object and astronomers worldwide have been scrutinizing it ever since. Indeed, better understanding Beta Pictoris means elucidating the formation of giant planets and planetary systems in general. In 2009, a French team led by Anne-Marie Lagrange1 found a giant gas planet, dubbed Beta-Pictoris b, seven times more massive than Jupiter, orbiting the star at 1.5 billion kilometres, similar to the distance planet Saturn orbits the Sun.

Seen from the Earth, the exoplanet Beta Pictoris b could be passing in front of its star between now and the summer of this year. By observing this transit phenomenon, which repeats itself every 18 years, astronomers could derive the exact size of the exoplanet, the extent of its atmosphere, as well as its chemical composition. However, the transit of the exoplanet will only last a few hours. To be able to observe the phenomenon, the exact timing of which is now known, the star has to be monitored continuously. This can only be done from Space, where there is no interruption due to the cycle of day and night, or the passage of clouds.

To attempt to observe the transit from Space, only a small, light nanosatellite could be developed in a short enough period of time. PicSat has been designed and built in only three years. This has been possible thanks

to the use of existing cubic modular structures, a CubeSat structure, which is a standardised format developed in the US, initially for educational use.

For the French CNRS, as well as for the Paris Observatory, this is the first satellite designed and built entirely in-house. PicSat is born from an idea by Sylvestre Lacour, astrophysicist at the CNRS, in collaboration with Alain le Lecavelier des Etangs from the Institut d'Astrophysique de Paris (CNRS/Sorbonne Université), who has been working on the Beta Pictoris system for many years. Sylvestre Lacour made the project come true in his laboratory, Lesia (Observatoire de Paris - PSL/CNRS/Sorbonne Université/Université Paris-Diderot) with a small team of scientists and engineers. It is a completely new approach to space instrumentation that has now taken off for French space research. The technological developments for PicSat have been supported in the framework of the C2ERES Space centre of the Université PSL, also at the site of the Paris Observatory in Meudon, France. The project has been made possible thanks to the financial support of the European Research Council (ERC), as well as that of the French CNRS, the Labex ESEP2 and the Swiss MERAC Foundation as part of its program to support young researchers in the field of Astrophysics.

On Friday 12 January 2018 at 4h58am local Paris time, the Indian PSLV launcher will lift off and place PicSat in a polar orbit at an altitude of 505 km, together with about thirty other satellites. PicSat will be operated from Lesia in Meudon. However, the satellite will be visible from Meudon for only about 30 minutes every day, when it passes over Paris. Therefore, PicSat uses radio amateur bands for its communication, for which authorisation has been obtained thanks to the help of the French Réseau des Émetteurs Français (REF, or the Network of French Emitters). Anybody who owns a minimum radio receiving equipment can listen to and receive PicSat’s transmissions. The PicSat team invites radio amateurs from all over the world to collaborate in following the satellite, receiving its data and relaying them to the PicSat data base via the Internet. Those interested can register on the PicSat website at PicSat.obspm.fr to follow the updates and, if they so wish, become part of the radio network.

The nominal PicSat mission will last for one year. When the start of a planetary or other transit is observed, the 3.6-meter telescope from the European Southern Observatory in La Sille, Chile, will also be immediately put into action to observe Beta Pictoris using the powerful HARPS instrument. These data combined will allow an even better understanding of the phenomenon.