When scientists searching for exoplanets — worlds located beyond our solar system — first spotted patterns in disks of dust and gas around young stars, they thought newly formed planets might be the cause. But a recent NASA study cautions that there may be another explanation — one that doesn’t involve planets at all.

Exoplanet hunters watch stars for a few telltale signs that there might be planets in orbit, like changes in the color and brightness of the starlight. For young stars, which are often surrounded by disks of dust and gas, scientists look for patterns in the debris — such as rings, arcs and spirals — that might be caused by an orbiting world.

“We’re exploring what we think is the leading alternative contender to the planet hypothesis, which is that the dust and gas in the disk form the patterns when they get hit by ultraviolet light,” said Marc Kuchner, an astrophysicist at NASA's Goddard Space Flight Center in Greenbelt, Maryland.

Astronomers thought patterns spotted in disks around young stars could be planetary signposts. But is there another explanation? A new simulation performed on NASA's Discover supercomputing cluster shows how the dust and gas in the disk could form those patterns — no planets needed.
Credits: NASA's Goddard Space Flight Center
Download additional imagery at NASA's Scientific Visualization Studio

Kuchner presented the findings of the new study on Thursday, Jan. 11, at the American Astronomical Society meeting in Washington. A paper describing the results has been submitted to The Astrophysical Journal.

When high-energy UV starlight hits dust grains, it strips away electrons. Those electrons collide with and heat nearby gas. As the gas warms, its pressure increases and it traps more dust, which in turn heats more gas. The resulting cycle, called the photoelectric instability (PeI), can work in tandem with other forces to create some of the features astronomers have previously associated with planets in debris disks.

Kuchner and his colleagues designed computer simulations to better understand these effects. The research was led by Alexander Richert, a doctoral student at Penn State in University Park, Pennsylvania, and includes Wladimir Lyra, a professor of astronomy at California State University, Northridge and research associate at NASA’s Jet Propulstion Laboratory in Pasadena, California. The simulations were run on the Discover supercomputing cluster at the NASA Center for Climate Simulation at Goddard.

In 2013, Lyra and Kuchner suggested that PeI could explain the narrow rings seen in some disks. Their model also predicted that some disks would have arcs, or incomplete rings, which were first directly observed in 2016.

Richert is lead author on the new study, which builds on Lyra and Kuchner’s previous simulations by including an additional new factor: radiation pressure, a force caused by starlight striking dust grains.

Light exerts a minute physical force on everything it encounters. This radiation pressure propels solar sails and helps direct comet tails so they always point away from the Sun. The same force can push dust into highly eccentric orbits, and even blow some of the smaller grains out of the disk entirely. 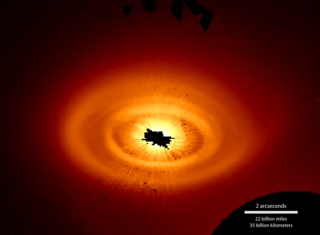 Arcs, rings and spirals appear in the debris disk around the star HD 141569A. The black region in the center is caused by a mask that blocks direct light from the star. This image incorporates observations made in June and August 2015 using the Hubble Space Telescope's STIS instrument.
Credits: NASA/Hubble/Konishi et al. 2016
Unlabeled version

The researchers modeled how radiation pressure and PeI work together to affect the movement of dust and gas. They also found that the two forces manifest different patterns depending on the physical properties of the dust and gas.

The 2013 simulations of PeI revealed how dust and gas interact to create rings and arcs, like those observed around the real star HD 141569A. With the inclusion of radiation pressure, the 2017 models show how these two factors can create spirals like those also observed around the same star. While planets can also cause these patterns, the new models show scientists should avoid jumping to conclusions.

“Carl Sagan used to say extraordinary claims require extraordinary evidence,” Lyra said. “I feel we are sometimes too quick to jump to the idea that the structures we see are caused by planets. That is what I consider an extraordinary claim. We need to rule out everything else before we claim that.”

Kuchner and his colleagues said they would continue to factor other parameters into their simulations, like turbulence and different types of dust and gas. They also intend to model how these factors might contribute to pattern formation around different types of stars.