Study, based in part at Berkeley Lab, also suggests dwarf planet in asteroid belt may be a source of rich organic matter 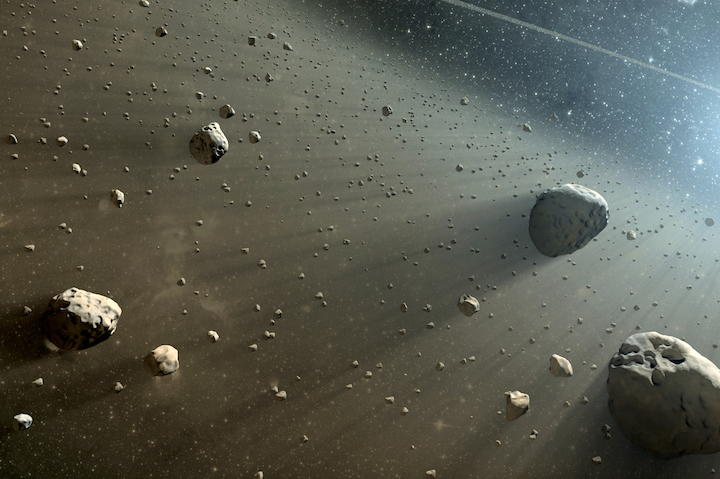 Two wayward space rocks, which separately crashed to Earth in 1998 after circulating in our solar system’s asteroid belt for billions of years, share something else in common: the ingredients for life. They are the first meteorites found to contain both liquid water and a mix of complex organic compounds such as hydrocarbons and amino acids.

A detailed study of the chemical makeup within tiny blue and purple salt crystals sampled from these meteorites, which included results from X-ray experiments at the Department of Energy’s Lawrence Berkeley National Laboratory (Berkeley Lab), also found evidence for the pair’s past intermingling and likely parents. These include Ceres, a brown dwarf planet that is the largest object in the asteroid belt, and the asteroid Hebe, a major source of meteorites that fall on Earth.

A blue crystal recovered from a meteorite that fell near Morocco in 1998. The scale bar represents 200 microns (millionths of a meter). (Credit: Queenie Chan/The Open University, U.K.)

The study, published Jan. 10 in the journal Science Advances, provides the first comprehensive chemical exploration of organic matter and liquid water in salt crystals found in Earth-impacting meteorites. The study treads new ground in the narrative of our solar system’s early history and asteroid geology while surfacing exciting possibilities for the existence of life elsewhere in Earth’s neighborhood.

“It’s like a fly in amber,” said David Kilcoyne, a scientist at Berkeley Lab’s Advanced Light Source (ALS), which provided X-rays that were used to scan the samples’ organic chemical components, including carbon, oxygen, and nitrogen. Kilcoyne was part of the international research team that prepared the study.

While the rich deposits of organic remnants recovered from the meteorites don’t provide any proof of life outside of Earth, Kilcoyne said the meteorites’ encapsulation of rich chemistry is analogous to the preservation of prehistoric insects in solidified sap droplets.

Queenie Chan, a planetary scientist and postdoctoral research associate at The Open University in the U.K. who was the study’s lead author, said, “This is really the first time we have found abundant organic matter also associated with liquid water that is really crucial to the origin of life and the origin of complex organic compounds in space.”

She added, “We’re looking at the organic ingredients that can lead to the origin of life,” including the amino acids needed to form proteins.

If life did exist in some form in the early solar system, the study notes that these salt crystal-containing meteorites raise the “possibility of trapping life and/or biomolecules” within their salt crystals. The crystals carried microscopic traces of water that is believed to date back to the infancy of our solar system – about 4.5 billion years ago.

These boys were playing basketball when a meteorite burrowed into the asphalt just yards away from their game on March 22, 1998. The meteorite has been found to contain traces of liquid water and amino acids. (Credit: Mark Bostick)

Chan said the similarity of the crystals found in the meteorites – one of which smashed into the ground near a children’s basketball game in Texas in March 1998 and the other which hit near Morocco in August 1998 – suggest that their asteroid hosts may have crossed paths and mixed materials.

There are also structural clues of an impact – perhaps by a small asteroid fragment impacting a larger asteroid, Chan said.

This opens up many possibilities for how organic matter may be passed from one host to another in space, and scientists may need to rethink the processes that led to the complex suite of organic compounds on these meteorites.

“Things are not as simple as we thought they were,” Chan said.

There are also clues, based on the organic chemistry and space observations, that the crystals may have originally been seeded by ice- or water-spewing volcanic activity on Ceres, she said.

“Everything leads to the conclusion that the origin of life is really possible elsewhere,” Chan said. “There is a great range of organic compounds within these meteorites, including a very primitive type of organics that likely represent the early solar system’s organic composition.”

Chan said the two meteorites that yielded the 2-millimeter-sized salt crystals were carefully preserved at NASA’s Johnson Space Center in Texas, and the tiny crystals containing organic solids and water traces measure just a fraction of the width of a human hair. Chan meticulously collected these crystals in a dust-controlled room, splitting off tiny sample fragments with metal instruments resembling dental picks.

“What makes our analysis so special is that we combined a lot of different state-of-the-art techniques to comprehensively study the organic components of these tiny salt crystals,” Chan said.

Yoko Kebukawa, an associate professor of engineering at Yokohama National University in Japan, carried out experiments for the study at Berkeley Lab’s ALS in May 2016 with Aiko Nakato, a postdoctoral researcher at Kyoto University in Japan. Kilcoyne helped to train the researchers to use the ALS X-ray beamline and microscope.

The beamline equipped with this X-ray microscope (a scanning transmission X-ray microscope, or STXM) is used in combination with a technique known as XANES (X-ray absorption near edge structure spectroscopy) to measure the presence of specific elements with a precision of tens of nanometers (tens of billionths of a meter).

“We revealed that the organic matter was somewhat similar to that found in primitive meteorites, but contained more oxygen-bearing chemistry,” Kebukawa said. “Combined with other evidence, the results support the idea that the organic matter originated from a water-rich, or previously water-rich parent body – an ocean world in the early solar system, possibly Ceres.”

Kebukawa also used the same STXM technique to study samples at the Photon Factory, a research site in Japan. And the research team enlisted a variety of other chemical experimental techniques to explore the samples’ makeup in different ways and at different scales.

Chan noted that there are some other well-preserved crystals from the meteorites that haven’t yet been studied, and there are plans for follow-up studies to identify if any of those crystals may also contain water and complex organic molecules.

Ceres, a dwarf planet in the asteroid belt pictured here in this false-color image, may be the source of organic matter found in two meteorites that crashed to Earth in 1998. (Credit: NASA)

Kebukawa said she looks forward to continuing studies of these samples at the ALS and other sites: “We may find more variations in organic chemistry.”

The Advanced Light Source is a DOE Office of Science User Facility.

Scientists at NASA Johnson Space Center, Kochi Institute for Core Sample Research in Japan, Carnegie Institution of Washington, Hiroshima University, The University of Tokyo, the High-Energy Accelerator Research Organization (KEK) in Japan, and The Graduate University for Advanced Studies (SOKENDAI) in Japan also participated in the study. The work was supported by the U.S. DOE Office of Science, the Universities Space Research Association, NASA, the National Institutes of Natural Sciences in Japan, Japan Society for the Promotion of Science, and The Mitsubishi Foundation.

Lawrence Berkeley National Laboratory addresses the world’s most urgent scientific challenges by advancing sustainable energy, protecting human health, creating new materials, and revealing the origin and fate of the universe. Founded in 1931, Berkeley Lab’s scientific expertise has been recognized with 13 Nobel Prizes. The University of California manages Berkeley Lab for the U.S. Department of Energy’s Office of Science.