A Nasa telescope housed on a converted jumbo jet has yielded important insights into how stars are born from collapsing gas and dust.

Measurements by the Sofia observatory underline the importance of magnetic fields for star formation.

Astronomers used an instrument on Sofia to study one of the closest stellar nurseries to Earth - Rho Ophiuchi A.

They discussed details of the work at the 231st American Astronomical Society meeting.

"Understanding how stars and planets are formed is one of the greatest challenges of modern astronomy," said co-author Fabio Santos, from Northwestern University in Evanston, Illinois.

"We know that stars and planets are formed in giant clouds of molecular gas and dust that exist in the plane of the Milky Way galaxy."

The basic idea is that these clouds contract under their own gravity. Becoming ever more dense, they fragment into gaseous clumps and, from there, dense structures called "cores" are formed.

It is within these dense cores of dust and gas that infant stars are found. 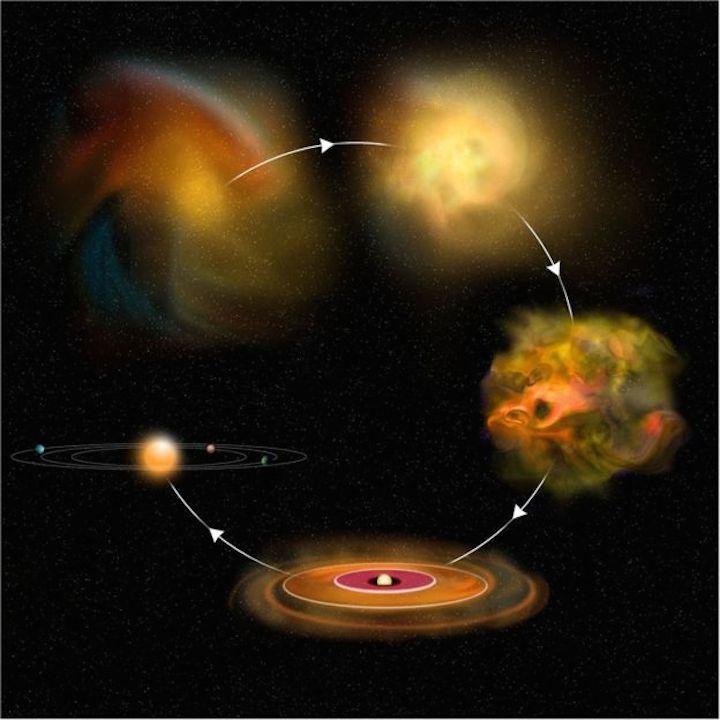 But the devil is in the detail: "It's a very complicated process," said Dr Santos.

The astronomers trained Sofia's HAWC+ instrument on Rho Ophiuchi A, which is actively forming hundreds of young stars. Many of which will probably become stars like our Sun, complete with their own planetary systems.

HAWC+ is sensitive to emission in the far-infrared portion of the electromagnetic spectrum. Data from the instrument allowed researchers to show that dust grains in the cloud were aligned with magnetic fields.

Furthermore, they found that changes in the way dust aligned along field lines were closely related to differences in the density of the star-forming cloud. The measurement represents the first of its kind - and Sofia is uniquely equipped to perform such observations.

Dr Santos explained: "The interstellar grains need radiation to align efficiently. It is expected that the grains in the outskirts of the cloud receive more radiation so they should be better aligned (with magnetic fields).

"As you go to the darker (and denser) parts of the cloud, the grains receive less radiation - so they are not very well aligned anymore."

But how does all this help better explain how stars and planets form?

"The cloud has mass, and therefore it has gravity. So you would think that it should just contract and create stars in there. But there are more things involved - one of these other things are magnetic fields," Dr Santos told me here at the astronomy meeting in National Harbor, just outside Washington DC.

"You can think of the magnetic field as this net of lines that is mixed together with the material in the cloud. Whenever the cloud contracts, it brings the field lines together. So, it acts as a kind of tension that holds the material together.

"There is an idea that if you have very strong magnetic fields in some parts of the galaxy, you could run into a situation where gravity will not be able to overcome this magnetic tension. So you won't be able to form any stars... the magnetic field lines don't let the material collapse." 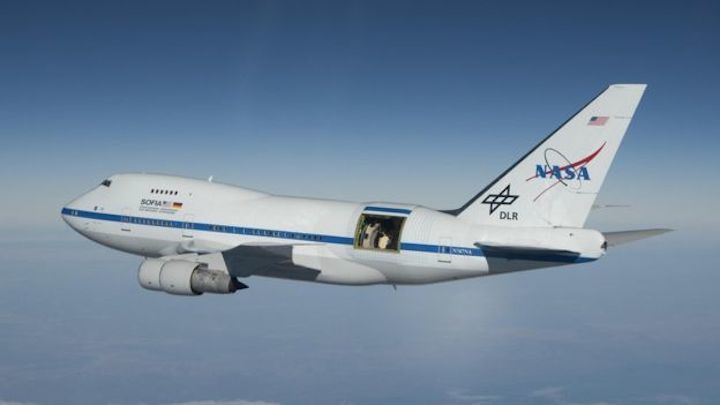 At the other end of the spectrum, weaker magnetic fields should in theory be overcome by gravity, initiating star formation.

Understanding patterns in the magnetic fields of star-forming regions might help us predict how they will evolve in future. The strength of the magnetic fields in space could also influence how massive stars grow to be, and, potentially, whether planetary systems can form around them, Dr Santos added.

The US-German Sofia (Stratospheric Observatory for Infrared Astronomy) observatory is based around a modified Boeing 747SP aircraft. While flying at altitudes of about 12km (41,000ft), a large door in the aft fuselage is opened, allowing a 2.5m diameter telescope to observe the sky.

The aircraft can rise above most of the water vapour in the Earth's atmosphere - which can block some infrared wavelengths from reaching the ground.

The project is managed for Nasa by the Universities Space Research Association (USRA), while the German parts of the venture are managed by a special organization - the DSI (Deutsches SOFIA Institut).

The massive forming star Cepheus A shown at three infrared wavelengths of 8, 19 and 37 microns. The location of the star is marked by the green dot in each panel. Light from the outflow cavity facing toward the telescope is indicated with the blue arrows, while light from the cavity facing away from the telescope is indicated with the red arrows. As part of the formation process, a disk around the star launches magnetized winds that clear a path through the dense, dusty cloud, making it easier to see the hot, glowing dust near star. The 8 micron image only reveals light from the outflow cavity facing the telescope, but in the 37 micron image, the hot dust from both cavities becomes apparent.
Credits: NASA/SOFIA/J. De Buizer/J. Tan
-

Astronomers are observing star-forming regions in our galaxy with NASA’s flying telescope, the Stratospheric Observatory for Infrared Astronomy, SOFIA, to understand the processes and environments required to create the largest known stars, which tip the scales at ten times the mass of our own Sun or more.

The research team, led by James M. De Buizer, SOFIA senior scientist and Jonathan Tan at Chalmers University of Technology, Gothenburg, Sweden and the University of Virginia, has published observations of eight extremely massive and young stars located within our Milky Way Galaxy. SOFIA’s powerful camera, the Faint Object infraRed Camera for the SOFIA Telescope, known as FORCAST, allowed the team to probe warm, dusty regions that are heated by light from luminous, massive stars that are still forming. SOFIA’s airborne location, flying above more than 99 percent of Earth’s infrared-blocking water vapor coupled with its powerful instruments, make it the only observatory that can study the stars at the wavelengths, sensitivity, and resolution necessary to see inside the dense dust clouds from which these stars are born.

The research is part of the ongoing SOFIA Massive (SOMA) Star Formation Survey by Tan and his collaborators. As part of this survey, they are studying a large sample of newborn stars, known as “protostars,” that have different masses, are at varying evolutionary stages, and within different environments. The team hopes to gain insight into the overall process of how massive stars form and to help test and refine new theoretical models of star formation.

Massive stars end their lives in violent supernova explosions, expelling the elements at their centers into the interstellar medium. Over millions or billions of years, these elements are recycled into newly forming stars and their solar systems.

“If it weren't for massive stars, we wouldn't have the essential elements needed to create our solar system, our planet, or even the basic building blocks needed for life,” says De Buizer. “It's not clear whether massive stars form in a similar environment, or even in the same ways, as our Sun formed. That's the reason we study massive stars, and their birth processes.”

There is no scientific consensus about the mechanism responsible for driving the creation of massive stars. This SOMA Survey reveals that massive star formation is accompanied by the launching of powerful, magnetized winds that flow out from above and below a swirling disk of gas that is feeding the growing star. These winds blow cavities through the dense, dusty cloud, which allowed researchers to see more clearly into the stellar nursery. By measuring how much light escapes from these cavities at different wavelengths, researchers can learn about the structure of protostars and can test different theoretical models of their formation.

“Understanding the birth process of massive stars is one of the most important unsolved problems of modern astrophysics, since these stars are so influential throughout our galaxy and beyond.” says Tan. “The unique ability of the SOFIA telescope to see at infrared wavelengths – wavelengths that are 100 times longer than those of visible light -- is crucial for progress on this research, since this is the part of the spectrum where the stars emit most of their energy.”

The first SOMA study was published in the Astrophysical Journal in 2017. Observations in the SOMA study will continue on board SOFIA in summer 2018, with plans to observe about fifty regions of massive star formation throughout our galaxy.

“Our recent and upcoming observations will yield a large enough sample to discover the general principles of how massive stars are born,” said Tan.

The research team involves a large international collaboration that includes Chalmers University and University of Virginia students, postdocs and faculty, along with collaborators from California, Wisconsin, the U.S. Virgin Islands, Japan and Italy. The SOMA Survey involves publication and release of the data for use by the whole astronomical community, with this being just the first data release.