A Langmuir probe, developed in Sweden and flown to Saturn on the Cassini spacecraft, has made exciting discoveries in the atmosphere of the planet. Jan-Erik Wahlund at the Swedish Institute of Space Physics in Uppsala and his colleagues show that there is a strong coupling, both chemically and electrically, between the atmosphere of Saturn and its rings. These research results have now been published in the well-respected journal Science.

In April the American space agency NASA put the Cassini spacecraft into an orbit that took it right through the narrow gap between the innermost visible ring (the D-ring) and at the same time very close to the Saturn, so close that it passed through the outer parts of the planet’s atmosphere. Cassini made 22 such orbits, and on the 15 September, according to plan, Cassini was sent down into the gas masses of Saturn and burned up. During all of these orbits most of the instruments on board made detailed measurements.

Now the scientific results are starting to take shape, and the results from the Swedish instrument are the first to be published in the well-known journal Science. The instrument, a so-called Langmuir proble, was developed at the Swedish Institute of Space Physics in Uppsala. The upper atmosphere of Saturn is charged and consists primarily of hydrogen and hydrogen ions. The Langmuir probe can be compared with a weather station for electrically charged gas; it measures its density, temperature and velocity. It also measures particles’ energy and moreover gives a rough estimate of what the gas consists of.

”The first results are surprising,” says Jan-Erik Wahlund, IRF, principle investigator and responsible for the Langmuir probe on Cassini.

”It is as though the small ice particles in the D-ring suck up electrons from the ionosphere,” says Jan-Erik Wahlund. ”As a result of the coupling, electrical flows of gas to and from the rings along the magnetic field of Saturn cause the greatest variations in density.”

It also transpired that the Saturn A- and B-rings protect it from the sun’s EUV radiation and stop the atmosphere in the southern hemisphere from being charged. This meant, for example, that radio waves from lightning further down in the atmosphere could pass up into ”holes” in the ionosphere and be detected by the radio antennae on Cassini. 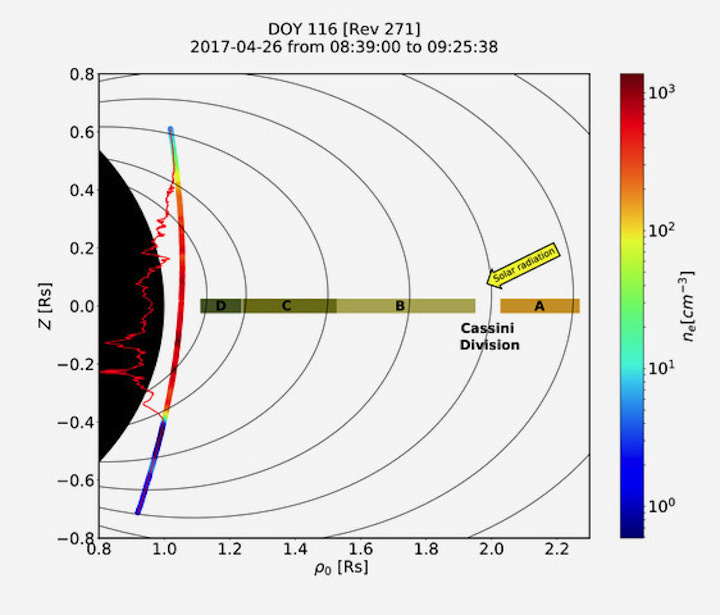 Illustration: Saturn (black) and its rings (from the outside ring: A, B, C, D) and the orbit of the Cassini spacecraft (coloured stripe) right through the gap between the innermost D-ring and Saturn. The coloured scale indicates the intensity of the charged gas (Image: Science)