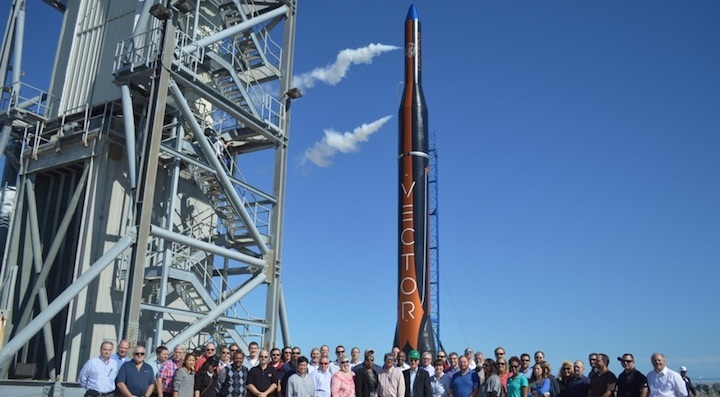 An engineering test model of the Vector-R rocket at Pad 0B of the Mid-Atlantic Regional Spaceport at Wallops Island, Virginia. Credit: Vector

ATLANTA — Vector, an Arizona-based company that has done test flights from California and Georgia, announced Oct. 19 it plans to make its first orbital launch from a Virginia site as soon as next summer.

Vector announced an agreement with the Virginia Commercial Space Flight Authority for three launches of the company’s Vector-R rocket from Mid-Atlantic Regional Spaceport (MARS), the commercial launch facilities on Wallops Island, Virginia, in the next two years. The agreement includes an option for five additional launches.

Those launches will take place from Pad 0B, one of two pads at MARS and the one devoted to smaller vehicles like the Vector-R. The company brought an engineering test model of the Vector-R to MARS for the announcement to demonstrate fueling and launch operations.

“By leveraging the talent and expertise already present in the MARS workforce and creatively using the spaceport assets at Pad 0B, the opportunity existed for Vector to quickly capitalize on MARS infrastructure to promote and develop their business through the contracted launch operations,” Dale Nash, executive director and chief executive of the authority, said in a statement issued by the office of Virginia Governor Terry McAulliffe.

The launches would provide some much-welcomed additional orbital launch activity at MARS. Pad 0B, used by Minotaur rockets, last hosted a launch in November 2013 when a Minotaur 1 rocket launched the ORS-3 mission. Neighboring Pad 0A, developed for Orbital ATK’s Antares, has not been used since an Antares launch a year ago. The next Antares launch, of a Cygnus cargo spacecraft bound for the International Space Station, is scheduled for no earlier than Nov. 11.

The announcement gave no date for when the first Vector-R launch would take place. However, in an Oct. 19 speech at the Symposium on Space Innovations on the campus of Georgia Tech here, company chief executive Jim Cantrell said he expected that launch to take place as soon as next July.

“Our first orbital flights are planned for July, and we’re already building those vehicles,” he said. “Our first flights are going to be out of Wallops.”

Vector has, to date, performed two test flights of the Vector, both only to very low altitudes. The first took place in May in California’s Mojave Desert and the second in August at the future site of Spaceport Camden on Georgia’s Atlantic coast. A third test, Cantrell said, is planned for January, back in the Mojave Desert.

He raised a note of caution about that test. “We have a high chance of planting that one in the desert, because it’s using thrust vector control. We’re taking the training wheels off,” he said.

Cantrell said the company’s long-term vision is for large numbers of launches — “we plan to fly them by the hundreds,” he said — from multiple launch sites. However, he added that Vector can be profitable at a rate of 12 launches a year.