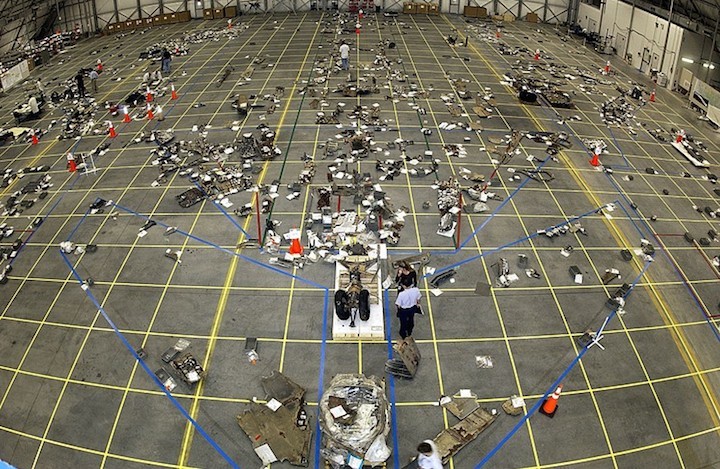 Investigators gathered all the debris from space shuttle Columbia and put it together in a hangar as they worked to understand what went wrong and caused the shuttle to disintegrate in 2003.

They say that those who forget the past are doomed to repeat it, and when it comes to NASA forgetting what happened before can have lethal consequences, as the federal space agency has learned over the years.

A recent report on NASA's Space Launch System, the Orion spacecraft and the Exploration Ground System — the three systems that are supposed to eventually work together to allow NASA to start launching astronauts into space from U.S. soil once more — has found that NASA officials may be in danger of making the same mistakes that were found to be behind one of the most agonizingly preventable accidents of the federal space agency's history, the destruction of the space shuttle Columbia in 2003.

The U.S. Government Accountability Office recently issued a report on NASA's work to get the three parts of its human space exploration program, the Space Launch System, the Orion spacecraft and the Exploration Ground System ready to begin test launches, which are currently slated to start in 2019.

The report raised some serious concerns about how NASA has set up this program, mentioning the shuttle Columbia's disintegration in 2003, a sure way to get the attention of every NASA employee.

Namely, it appears that NASA is making some of the same systemic mistakes that were ultimately determined to have played a part in Columbia's destruction as it re-entered Earth's atmosphere. "When technical authorities must also deal with cost and schedule pressures, it can potentially impair their independence. A review board concluded this type of tension contributed to the 2003 Columbia shuttle accident," the report states.

The main issue is that the technical authorities on these projects are currently being asked to wear too many hats. The people in charge are supposed to be both overseeing the engineering and safety concerns that come with putting humans on top of powerful rockets packed with enormous amounts of fuel and shooting them into space, are also in charge of keeping these projects on time and within the agency's budget.

This puts agency officials in the position of "grading their own homework" as the report notes, a situation which makes the odds significantly higher that something crucial will be missed.

Since its inception in the late 1950s, NASA officials have learned, sometimes through deeply painful and public losses of life, that it is crucial to have a system of developing technology where the work is checked and rechecked by as many separate and independent minds as possible.

The Challenger explosion in 1986 was a wakeup call for NASA, but by 2003, the space agency had grown complacent and overly confident in its abilities, a fatal mistake as many concluded in the aftermath of the Columbia disaster.

Investigators ultimately determined the Columbia had broken up because of a faulty design on the external tank. A piece of insulating foam had broken off the tank just after the launch, striking the left wing. The missing chunk of fuselage then “resulted in a rapid catastrophic structural breakdown rather than an instantaneous explosive failure,” according to the report issued by the Columbia Accident Investigation Board, the entity created to figure out what had gone wrong.

But aside from the technical problems, the report found that NASA's own culture which prized mission success over the realities of engineering, that used an informal chain of command that essentially meant key information about the shuttle's condition failed to make its way to the right people in the agency, and the concerns of those who knew enough to be worried about how the shuttle would fare on reentry were silenced.

Because of all of this, seven astronauts were doomed before the Columbia ever began to re-enter the Earth's atmosphere, as the chink in the siding gave out and the shuttle caught fire and began to break apart midair. The astronauts were still alive as their pod separated from the rest of the shuttle and hurtled to Earth. They died from blunt trauma and lack of oxygen as the crew module turned into a blazing comet and smacked down in East Texas, a revelation so distressing for both the astronaut families and NASA employees that there was an attempt to stifle the report findings before they were ultimately made public.

In other words, the GAO report on the new methods in development to send astronauts to space isn't kidding around by invoking Columbia in its new analysis of NASA's SLS, Orion and EGS program. The program is managed by the Exploration Systems Development division within NASA’s Human Exploration and Operations Mission Directorate, and the report makes it clear that this approach to managing the program puts the agency in line to make some of the same mistakes that so many vowed would never happen again after Columbia ended up scattered across the southern United States in 2003.

The specific issue comes up because unlike previous human exploration programs where a single program manager oversaw the effort supported by an integration contractor, this time ESD itself is managing both the program and the integration. While folding these efforts together would save money, it also impairs the independence of the engineers working on the projects and does away with the kind of technical oversight required to really ensure that every precaution is taken to send astronauts up and bring them down as safely as possible.

It's understandable how appealing cutting costs and corners must be — NASA is always strapped for money, as we've mentioned before — but the GAO has done an impressive job of summing up why these things are supposed to be kept separate and why the agency developed these processes in the first place.

It's all summed up with just the mildest mention of the space shuttle Columbia, which makes sense because the psychological scarring from that disaster is so ingrained in the agency that a mere mention is all it takes to get everyone's full attention.