From his desk at the European Space Operations Centre in Darmstadt, Germany, space debris analyst Tim Flohrer keeps track of the 23,000 or so catalogued objects currently orbiting the Earth. They range from spacecraft and satellites – some working, most not – to discarded rocket stages and fragmented space hardware. All of them the result of 60 years of space exploration.

“The earlier satellites, such as Sputnik, have all re-entered the atmosphere,” says Flohrer. “But I estimate that Vanguard 1 will remain in orbit for several hundred, if not a thousand years.”

Conceived by the Naval Research Laboratory (NRL) in 1955, Vanguard was to be America’s first satellite programme. The Vanguard system consisted of a three-stage rocket designed to launch a civilian scientific spacecraft. The rocket, satellite and an ambitious network of tracking stations would form part of the US contribution to the 1957-58 International Geophysical Year. This global collaboration of scientific research involved 67 nations, including both sides of the Iron Curtain.

“It wasn’t a space race,” says NRL Historian, Angelina Callahan. “The US was always forthright in terms of launch and intended purposes for the satellite but the Soviets held their cards closer to their chest.”

So, when the Soviet Union launched Sputnik on 4 October 1957, it came as a shock. “A lot of the disappointment of Sputnik [for the US satellite team] was from the fact that their partners in this international partnership were not telling them they were sending a satellite up,” says Callahan. 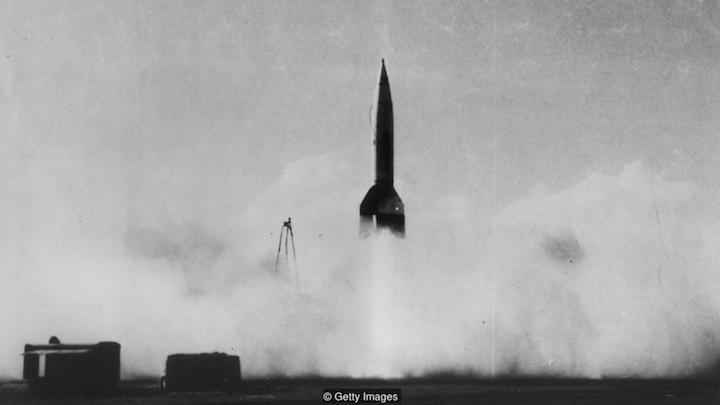 The rockets that launched the Vanguard satellites were based on the German V-2 design (Credit: Getty Images)
-

“There was tremendous fear generated by Sputnik,” says Tom Lassman, curator of Cold War rockets at the National Air and Space Museum in Washington DC. An identical “flight backup” of the Vanguard 1 satellite is on display at the Institution’s Udvar-Hazy Center near Dulles Airport.

“Sputnik made military leaders realise the Soviet Union could hit us with a missile.” In the weeks that followed the Soviet launch, pressure from the Eisenhower White House mounted on the Navy team to launch a US satellite as soon as possible.

On 6 December 1957, what had originally been planned as a further incremental test of Vanguard Test Vehicle 3 (TV3) became a major public event. Whereas the Soviets only announced Sputnik after it had successfully reached orbit, politicians, senior military figures and the world’s media gathered at Cape Canaveral, Florida for the US launch.

There’s a lot of failure in a successful research and development process – Angelina Callahan, NRL historian

After a series of countdown delays, at 11:44, the Vanguard rocket lifted from the launch pad. A few seconds later, someone in the control room shouted: "Look out! Oh God, no!" as the rocket rose four feet in the air and crashed back to the ground in a ball of flame. The nose cone was thrown clear – the Vanguard satellite still beeping. (You can read a full account of the disaster in this Nasa report).

The New York Times described the explosion as a “blow to US prestige”, Senator Lyndon Johnson called it “humiliating”. Others were even less diplomatic – newspapers dubbing the US satellite variously “flopnik”, “kaputnik” and “stayputnik”.

For the NRL team, it really wasn’t fair. “There’s a lot of failure in a successful research and development process,” says Callahan. “During the course of these failures, they developed a very good system.”

Ex-Nazi rocket pioneer Wernher von Braun, who had long been pushing to launch something – anything – into orbit, seized the opportunity. With backing from the US Army, he had been developing the Jupiter rocket – an evolution of his V2 ballistic missile. 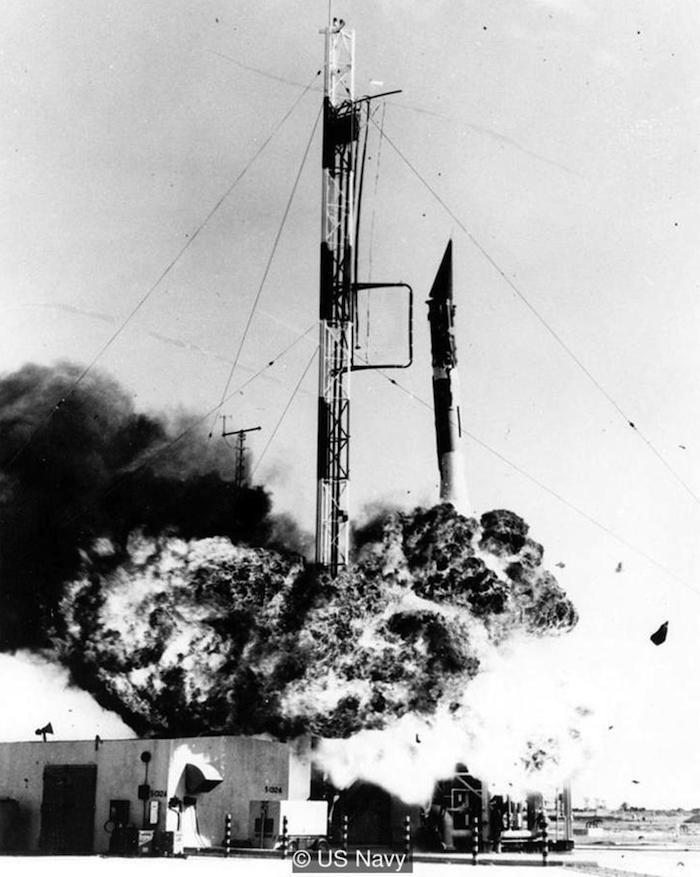 The Vanguard programme was beset with several launch failures (Credit: US Navy)

“The priority was to get something up as quickly as possible,” says Lassman.

On 31 January 1958, one of von Braun’s Jupiter launchers blasted Explorer 1 – a satellite designed and built by the Jet Propulsion Laboratory in Pasadena, California in just three months – into orbit. America’s first satellite was fitted with a cosmic ray detector to measure the space radiation environment. Designed by James Van Allen of the University of Iowa, the instrument revealed a belt of charged particles trapped by the Earth’s magnetic field, which became known as the Van Allen Belts.

Finally, on 17 March 1958, it was the Navy’s turn. Under clear skies, NRL’s Vanguard rocket carried Vanguard 1 into orbit. The tiny spacecraft was soon sending back its first radio signals. In fact, because it was the first satellite powered by solar cells, the spacecraft was still transmitting data until 1965. Explorer 1 only lasted a few months.

Not only is Vanguard 1 still in orbit, its legacy lives on

Although not the first satellite, Vanguard 1 was still a remarkable achievement. As well as proving the technology of a new launcher system, the ground station network and solar cells, the satellite showed how our planet bulges out around the equator. Equipped with an instrument to measure atmospheric density, it provided the first-ever measurements of the Earth’s tenuous outer atmosphere and an estimate of the number of micrometeorites surrounding the planet – all vital information for future spacecraft. As a military-funded project, this also fed into calculations for the accuracy of ICBM trajectories.

Not only is Vanguard 1 still in orbit, its legacy lives on. The rocket system forms the basis for the Delta launch vehicle, one of the world’s most successful launchers. Long term tracking of the satellite continues to help scientists understand the influence of the Earth’s atmosphere on satellites and how orbits decay over time.

Perhaps most importantly, Vanguard 1 revealed the potential of satellites on which we’re all now dependent. 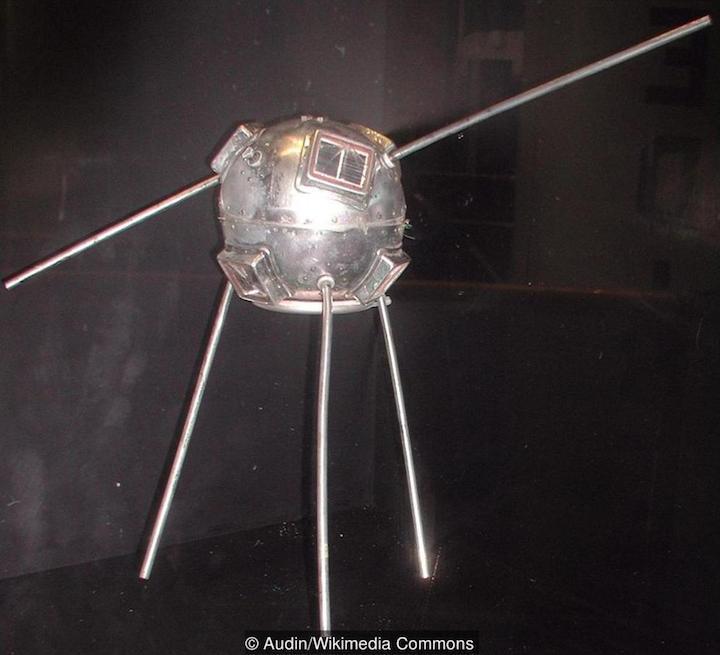 Vanguard 3, which is at the Smithsonian Air and Space Museum, bears the damage from its failed launch (Credit: Audin/Wikimedia Commons)

“The NRL produced a classified report talking about the satellites the US Navy would need in future decades,” says Callahan. “It included weather, navigation, communication and reconnaissance satellites and the report closed with all the science that would be needed to make those systems viable.”

Sixty years on, that science and those predictions have become reality. The satellite that helped make this possible, and the team behind it, deserve to be remembered.

“It’s extraordinary,” says Lassman. “We not only have an artefact in the museum, we have one flying around in space – it’s living history.”

Raumfahrt-History - Nearly 60 years ago, the US Navy launched Vanguard-1 as a response to the Soviet Sputnik.
1190 Views
Created with page4