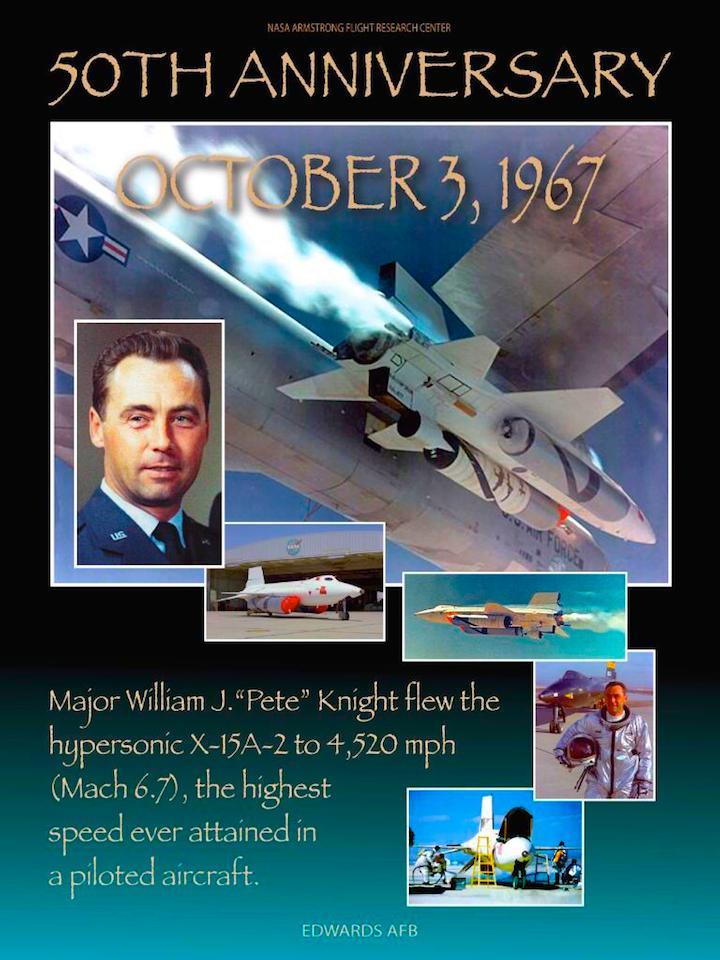 In the joint X-15 hypersonic research program that NASA conducted with the Air Force, the Navy, and North American Aviation, Inc., the aircraft flew over a period of nearly 10 years and set the world's unofficial speed and altitude records of 4,520 mph (Mach 6.7) and 354,200 feet in a program to investigate all aspects of piloted hypersonic flight. Information gained from the highly successful X-15 program contributed to the development of the Mercury, Gemini, and Apollo piloted spaceflight programs as well as the Space Shuttle program.

Manufactured by North American Aviation, Inc., three rocket-powered X-15s flew a total of 199 times, with North American (and former National Advisory Committee for Aeronautics or NACA) pilot Scott Crossfield making the first, unpowered glide flight on June 8, 1959. NASA's William H. Dana was the pilot for the final flight in the program on Oct. 24, 1968. All of these flights took place within what was called the "High Range" surrounding but mostly to the east of Edwards Air Force Base, Calif., and NASA's Flight Research Center (later called the NASA Dryden Flight Research Center).

There were 10 other pilots in the program for a total of 12: five from NASA, five from the Air Force, one from the Navy, and one, Crossfield, from North American. Generally, pilots used one of two types of flight profiles  a speed profile that called for the pilot to maintain a level altitude until time for descent to a landing, and a high-altitude flight plan that required maintaining a steep rate of climb until reaching altitude and then descending.

Because of the large fuel consumption of its rocket engine, the X-15 was air launched from a B-52 aircraft at about 45,000 feet and speeds upward of 500 mph. Depending on the mission, the rocket engine provided thrust for the first 80 to 120 seconds of flight. The remainder of the normal 8- to 12-minute flight was without power and ended in a 200-mph glide landing. Because the nose landing wheel lacked steering and the main landing gear employed skids, the X-15 had to land on a dry lakebed. The Rogers Dry Lake adjacent to Edwards and Dryden was the intended landing location for all flights, but there were numerous emergency lakebeds selected in advance for emergency landings. 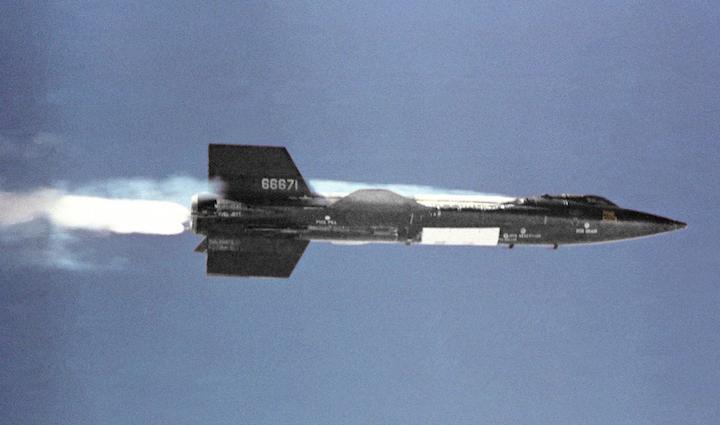 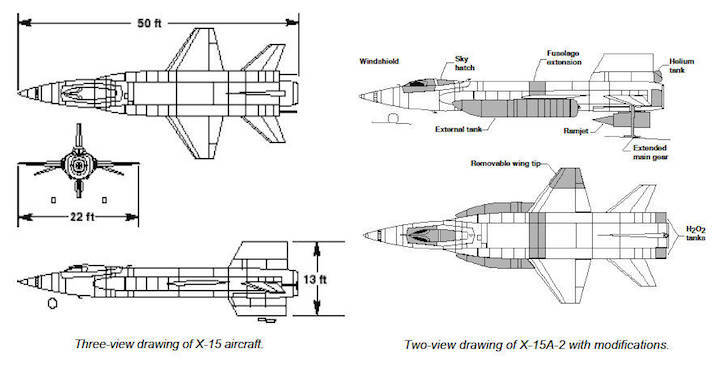 The X-15 was a follow-on research aircraft to the early X-planes, which had explored the flight regime from just below the speed of sound (Mach 1) to Mach 3.2. In 1952 the NACA had begun preliminary research into space flight and associated problems. Two years later, NACA's Research Airplane Projects Panel discussed the need for a new research airplane to study hypersonic and space flight. The NACA established the characteristics of what became the X-15 and presented them to the Air Force and Navy in July 1954. The two services and NACA signed a memorandum of understanding for the joint project in December 1954, and the Air Force selected North American to develop three X-15 research aircraft in September 1955.

Although the number two aircraft was later modified, the basic X-15 was a single-seat, mid-wing monoplane designed to explore the areas of high aerodynamic heating rates, stability and control, physiological phenomena, and other problems relating to hypersonic flight (above Mach 5). Because the Reaction Motors Division of Thiokol Chemical Corp. did not have the throttleable XLR-99 engine ready for the early flights of the aircraft, the X-15 initially flew with two XLR-11 engines, producing a thrust of 16,380 lb. Once the XLR-99 was installed, the thrust became 57,000 lb.

The X-15 used conventional aerodynamic controls for flight in the dense air of the usable atmosphere. The controls consisted of rudder surfaces on the vertical stabilizers to control yaw (movement of the nose left or right) and canted horizontal surfaces on the tail to control pitch (nose up and down) when moving in synchronization or roll when moved differentially.

For flight in the thin air outside the Earth's atmosphere, the X-15 used a reaction control system. Hydrogen peroxide thrust rockets on the nose of the aircraft provided pitch and yaw control. Those on the wings furnished roll control.

The outer skin of the X-15 consisted of a nickel-chrome alloy called Inconel X, employed in a heat sink structure to withstand the results of aerodynamic heating when the aircraft was flying within the atmosphere. The cabin was made of aluminum and was isolated from the outer structure to keep it cool. 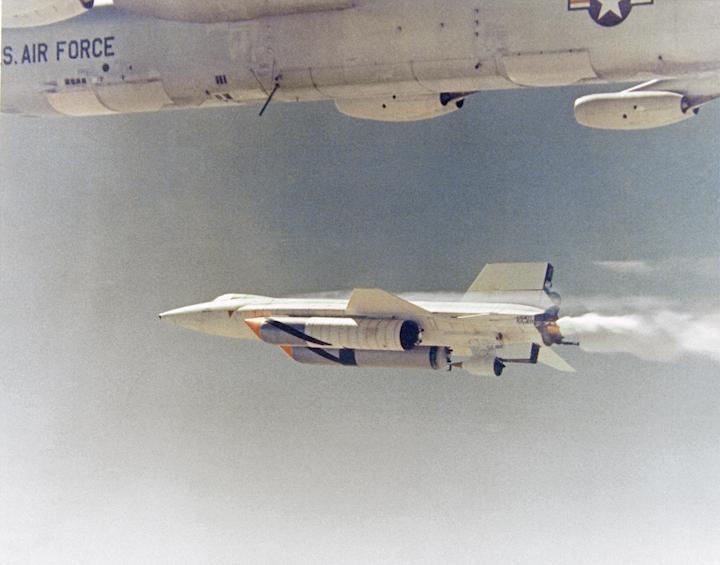 After an ablative coating to protect the craft from the high temperatures flight X-15 was then covered with a white sealant coat and mounted with additional external fuel tanks.
Credits: NASA Image
-

The first X-15 arrived at the NASA High-Speed Flight Station in the early months of 1959, and Scott Crossfield, who had helped with the design of the aircraft, soon began the contractor demonstration flights. During its research program, the aircraft set unofficial world speed and altitude records of 4,520 mph (Mach 6.7on Oct. 3, 1967, with Air Force pilot Pete Knight at the controls) and 354,200 feet (on Aug. 22, 1963, with NASA pilot Joseph Walker in the cockpit).

More important than records, however, were the X-15's probing of hypersonic aerodynamic performance and heating rates, research into structural behavior during high heating and high flight loads, study of hypersonic stability and control during exit from and reentry of the atmosphere, and examination of pilot performance and physiology.

In the course of its flight research, the X-15's pilots and instrumentation yielded data for more than 765 research reports. As Dryden Chief Scientist Ken Iliff and his wife, aerospace research engineer Mary Shafer, have written, "The aircraft returned benchmark hypersonic data for aircraft performance, stability and control, materials, shock interaction, hypersonic turbulent boundary layer, skin friction, reaction control jets, aerodynamic heating, and heat transfer." (The boundary layer is the thin layer of air next to the body of the aircraft that has distinctive flow characteristics because of friction between the air and the surface of the aircraft; control of the flow in the boundary layer is critical to improving aircraft performance.)

The distinguished Langley aeronautical researcher John Becker, who had been an early advocate of the X-15 program, identified 25 specific accomplishments of the effort. These included: 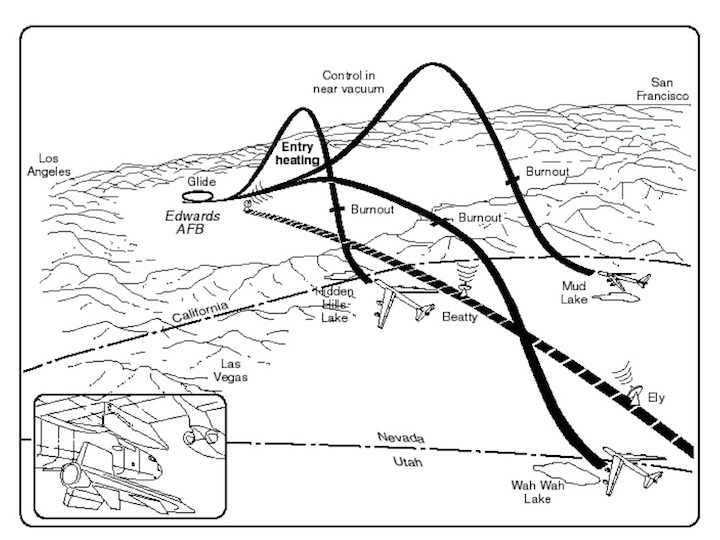 These experiments - 28 of them - ranged from astronomy to micrometeorite collection. They included tests of horizon definition and proposed insulation that bore fruit in the navigation equipment and thermal protection used on the Saturn launch vehicles in the Apollo program, which dispatched 12 astronauts to the moon and back. Among the 12 was Neil Armstrong, the first human to step on the moon's surface and a former X-15 pilot who also flew many other research aircraft at the Flight Research Center.

In the area of physiology, researchers learned that the heart rates of X-15 pilots ranged from 145 to 185 beats per minute during flight. This greatly exceeded the normal 70 to 80 beats per minute experienced on test missions for other aircraft. The cause of the difference proved to be the stress X-15 pilots encountered during pre-launch in anticipation of each mission. As it turned out, the higher rates proved typical for the future physiological behavior of pilot- astronauts.

More intangibly but no less importantly, in the words of John Becker, the X-15 project led to "the acquisition of new piloted aerospace flight 'know how' by many teams in government and industry. They had to learn to work together, face up to unprecedented problems, develop solutions, and make this first manned [today, we would say piloted] aerospace project work. These teams were an important national asset in the ensuing space programs."

As the partial list of accomplishments suggests, the X-15 brilliantly achieved its basic purpose of supporting piloted hypersonic flight within and outside the Earth's atmosphere. In addition, it carried out the "explorations to separate the real from the imagined problems and to make known the overlooked and the unexpected problems" that Hugh Dryden had called for in 1956 when the X-15 was still in the design and development phase.

Except for the number two X-15 when modified as the X-15A-2, the X-15s were roughly 50 ft long, with a 22-ft wing span. The wedge-shaped vertical tail was 13 ft high. Because the lower vertical tail extended below the landing skids when they were deployed, a part of the lower vertical tail was jettisoned just before landing and recovered by a parachute. The aircraft was powered by a Thiokol (Reaction Motors Division) XLR-99 throttleable rocket engine powered by anhydrous ammonia and liquid oxygen. It provided a maximum thrust of 57,000 lb and a minimum thrust of 28,000 lb. Launch weight of the aircraft was 31,275 lb, decreasing to 12,295 lb at burnout.

The X-15A-2, modified from the number two aircraft and delivered to NASA in February 1964, included among other new features, a 28-in. fuselage extension to carry liquid hydrogen for a supersonic combustion ramjet that was flown (as a dummy) but never tested. It also had external tanks for liquid ammonia and liquid oxygen. These tanks provided roughly 60 seconds of additional engine burn and were used on the aircraft's Mach 6.7 flight. While adding to the speed the X-15 did achieve, the tanks also increased the aircraft's weight to almost 57,000 lb and added significantly to the drag experienced by the aircraft in flight.

The X-15 had its share of emergency landings and accidents, but only two produced serious injuries or death. On Nov. 9, 1962, Jack McKay experienced an engine failure and landed at Mud Lake, NV. The landing gear collapsed, flipping him and the aircraft on its back. Although he recovered from his injuries sufficiently to fly again, he eventually had to retire because of them. 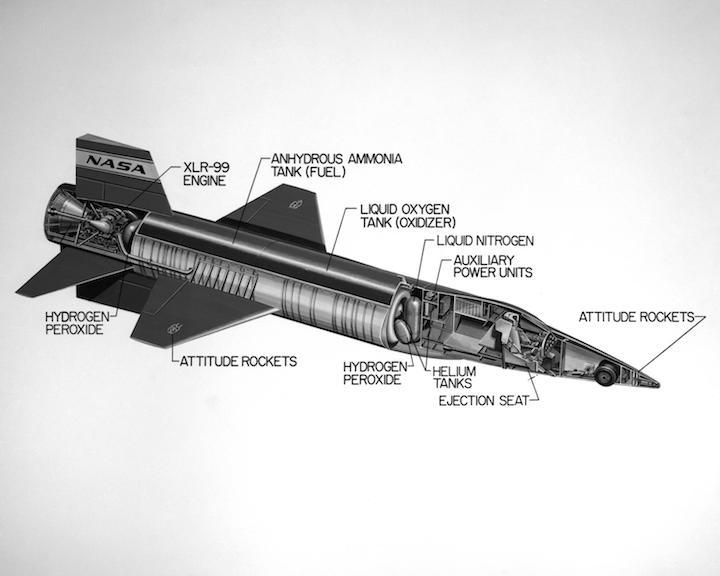 On Nov. 15, 1967, on Michael Adams seventh flight, he entered a spin from which he was able to recover but could not bring it out of an inverted dive because of a technical problem with the adaptive flight control system. He died in the resultant crash of the X-15 number three. 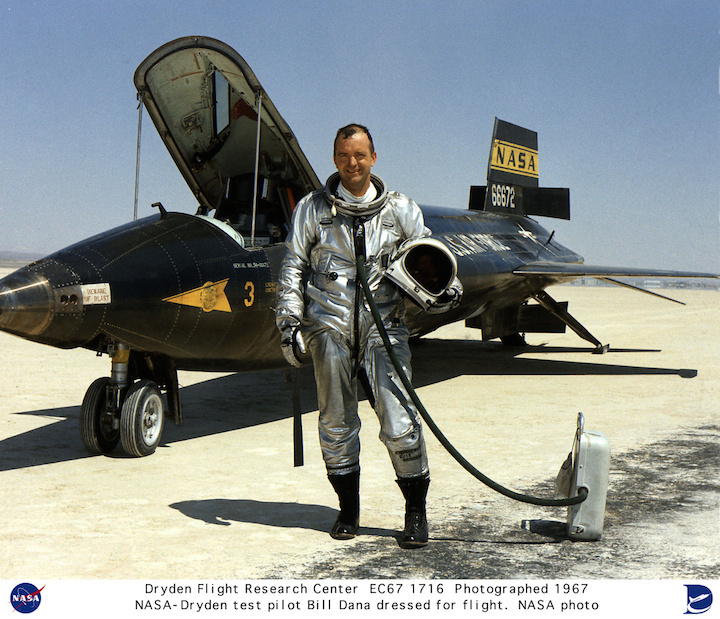 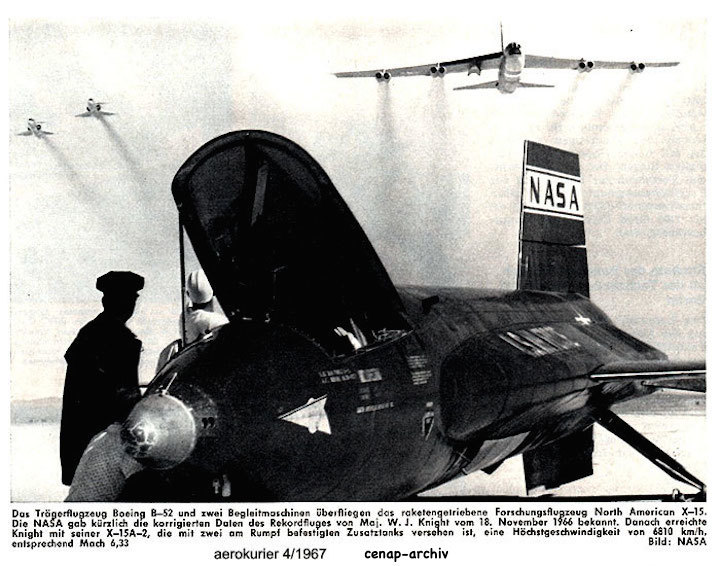 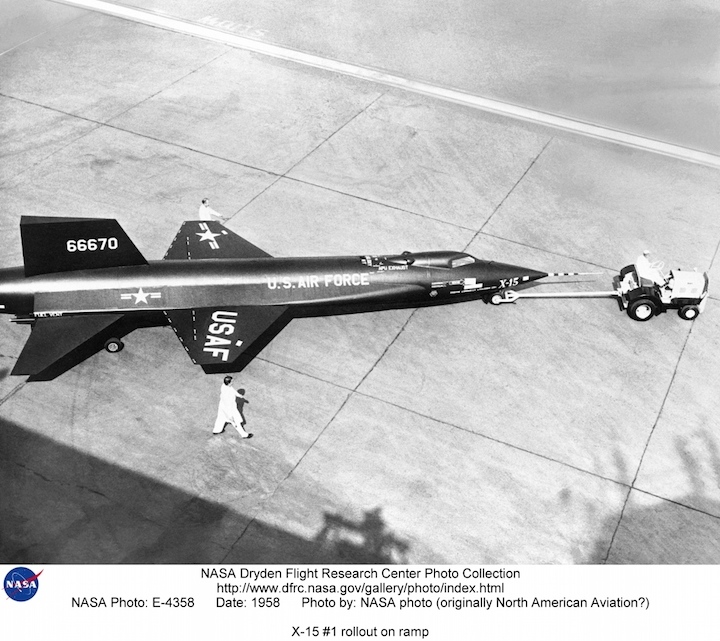 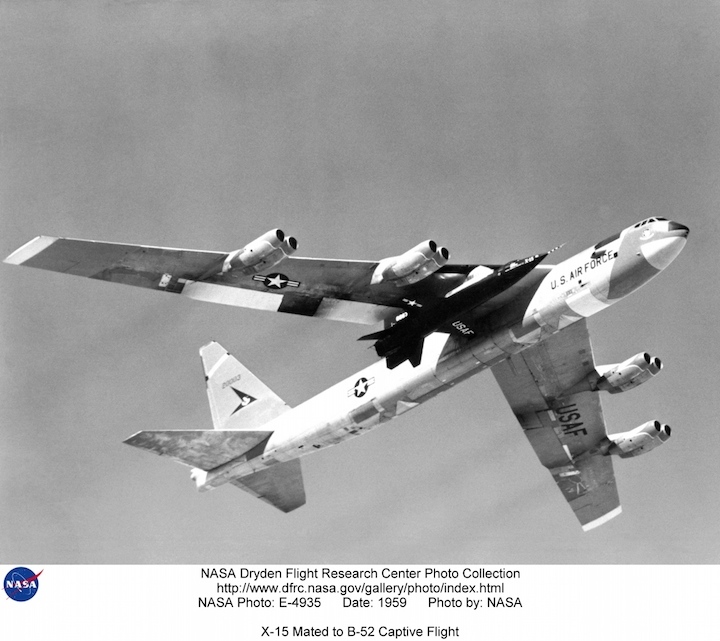 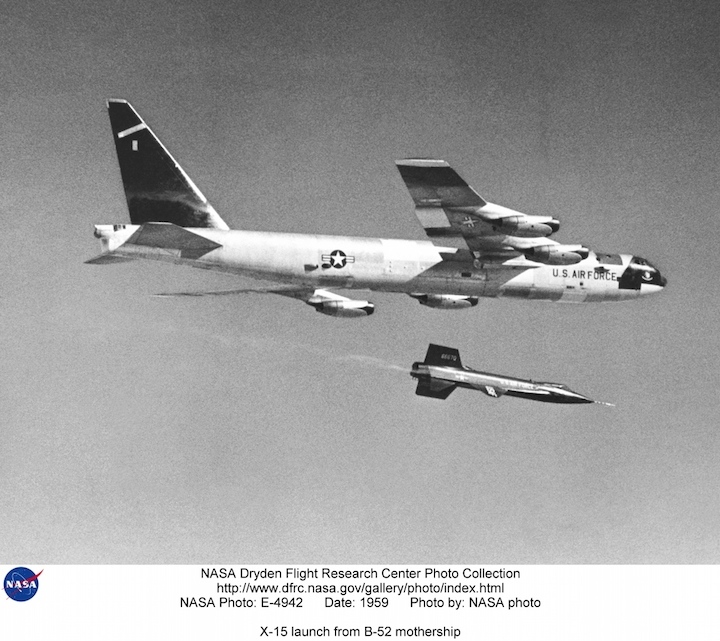 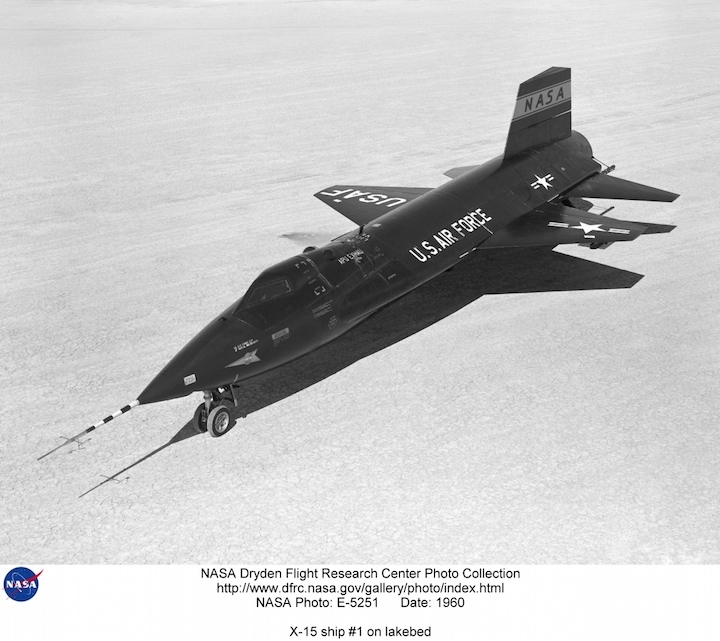 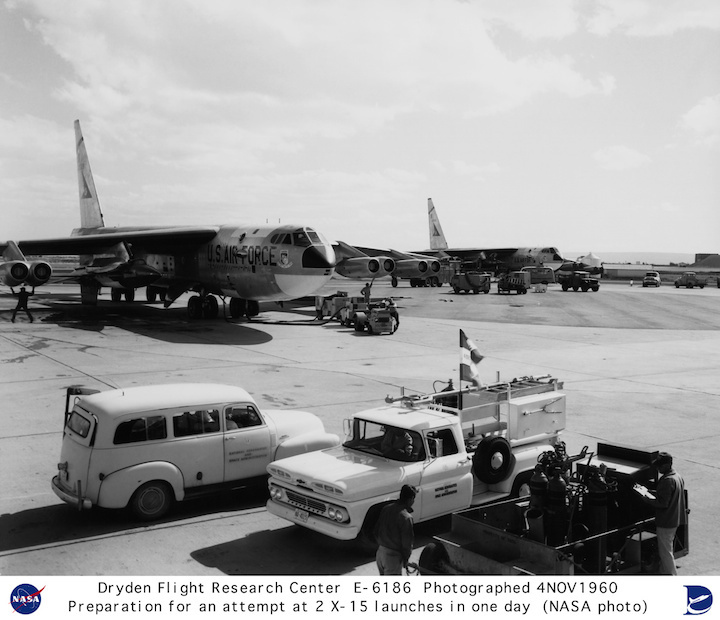 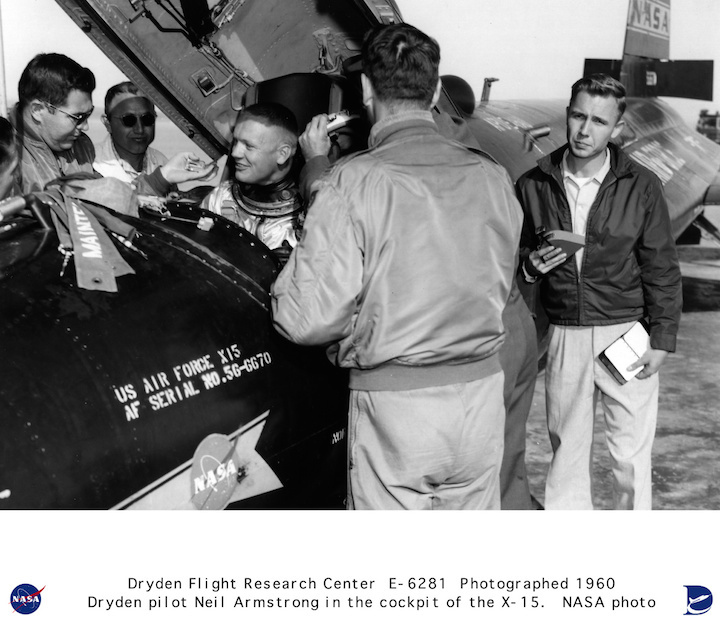 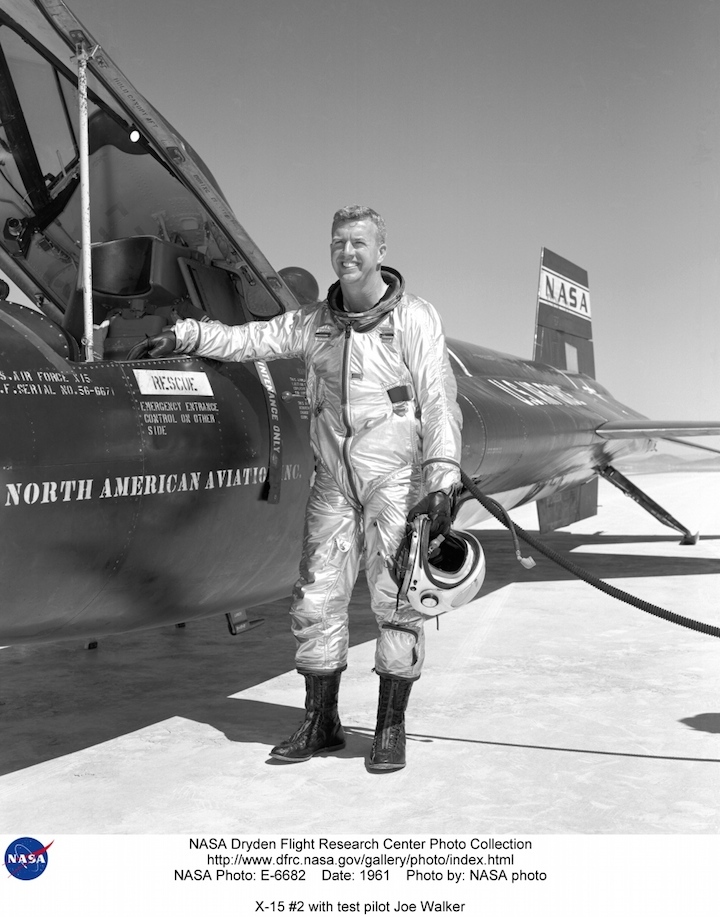 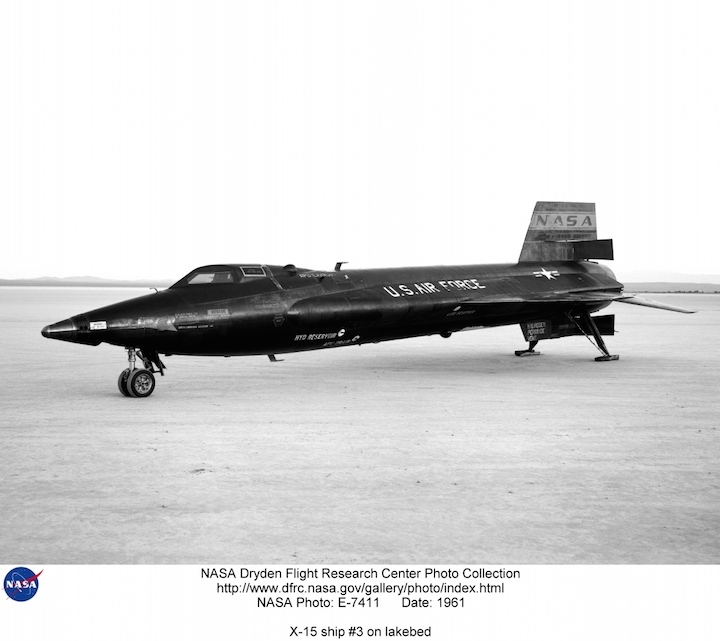 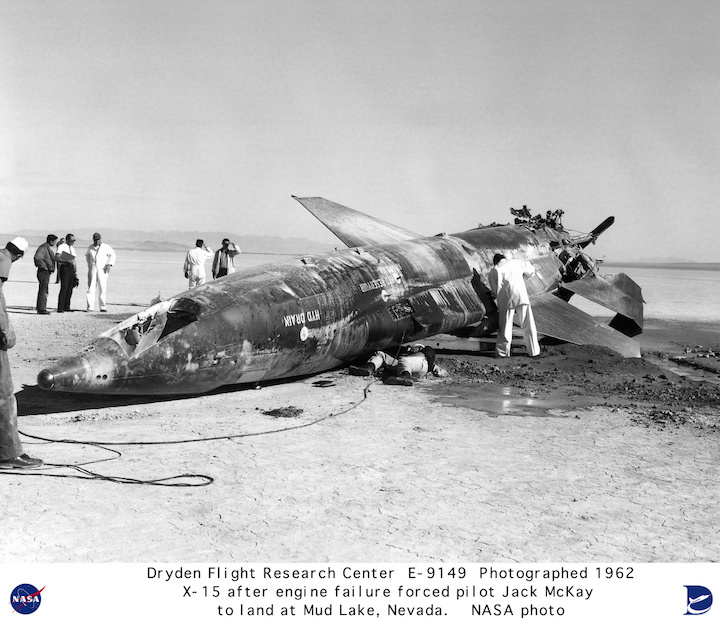 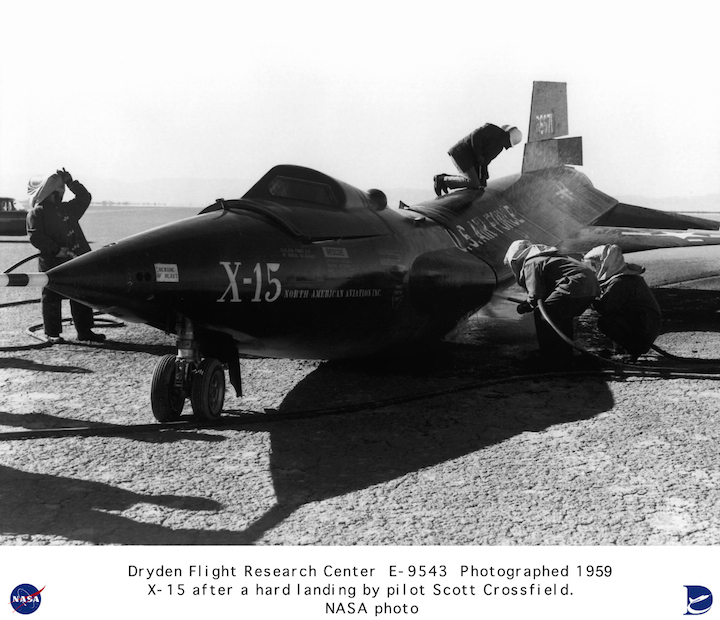 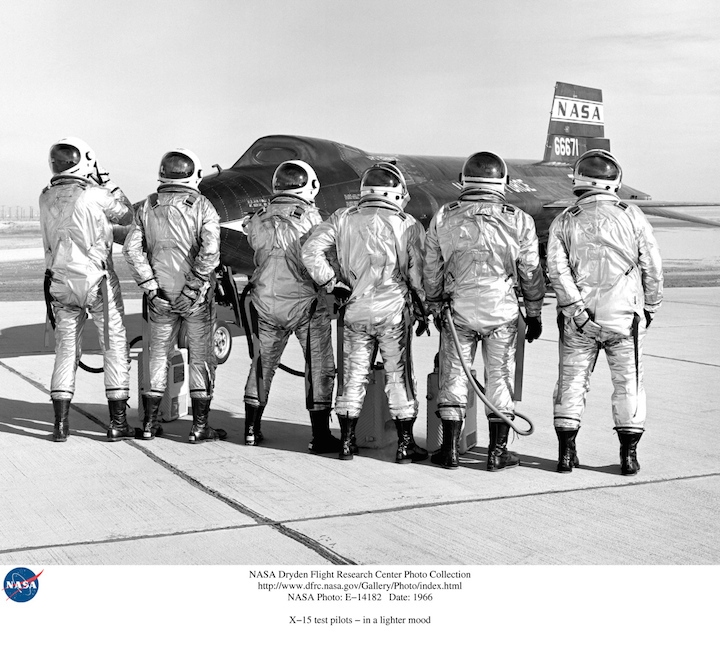 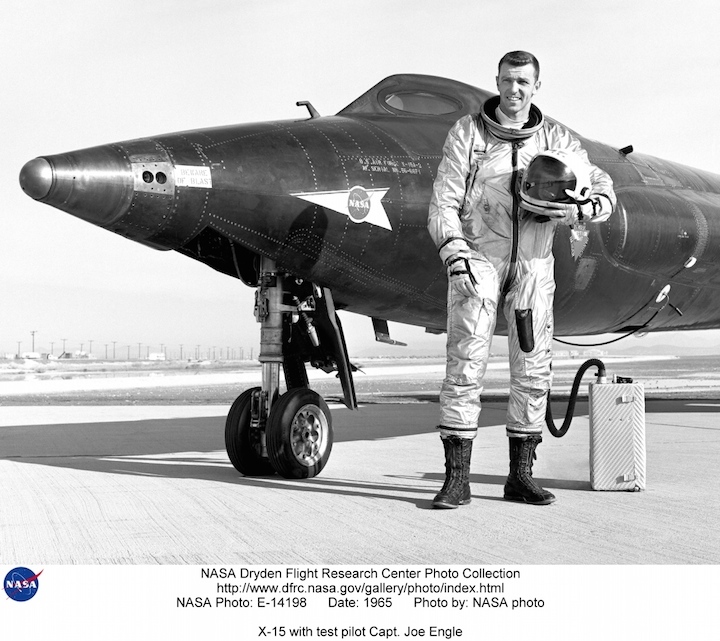 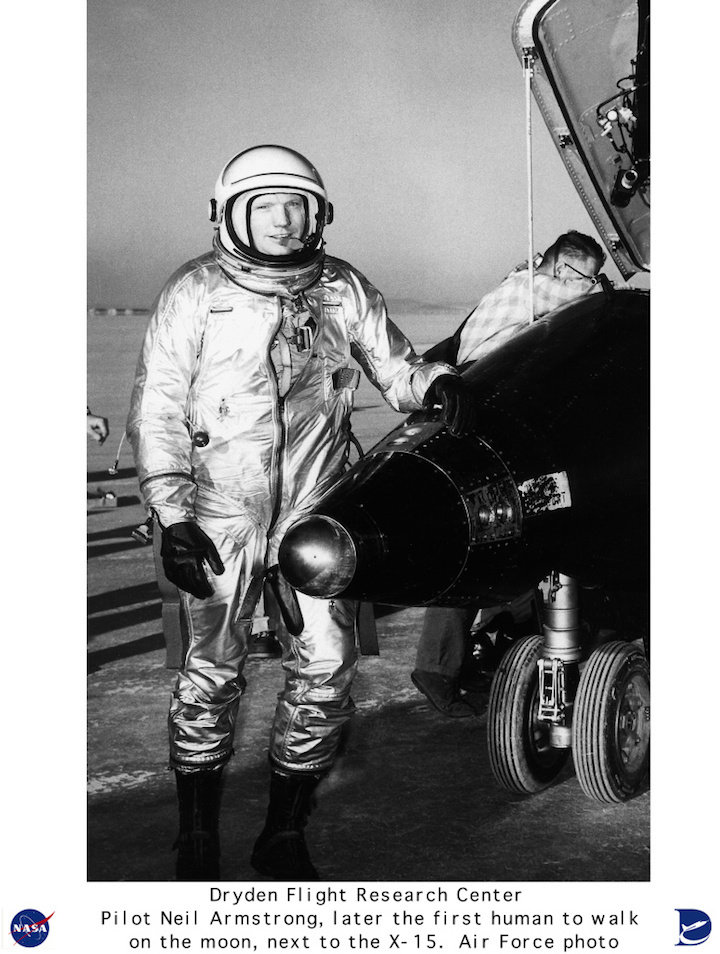 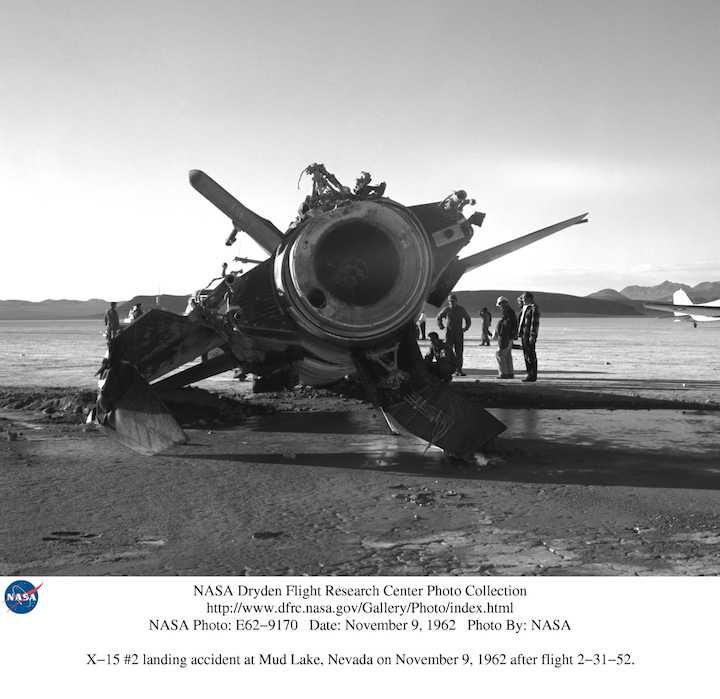 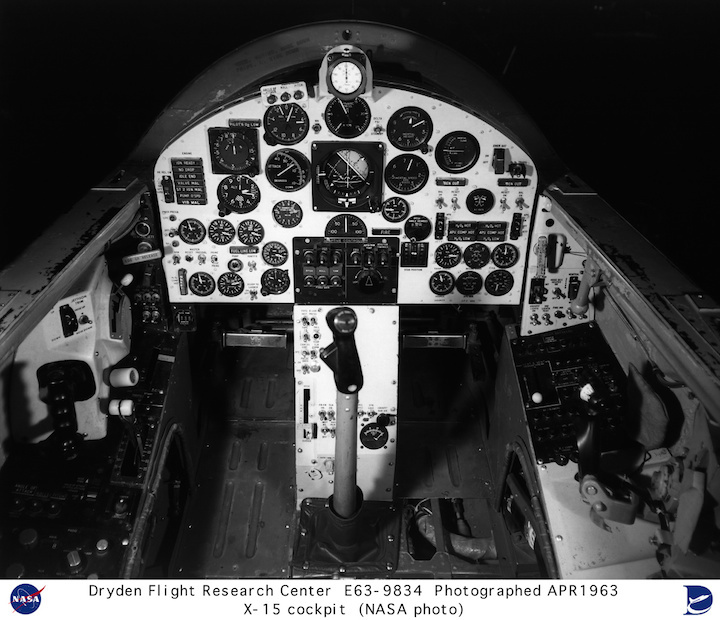 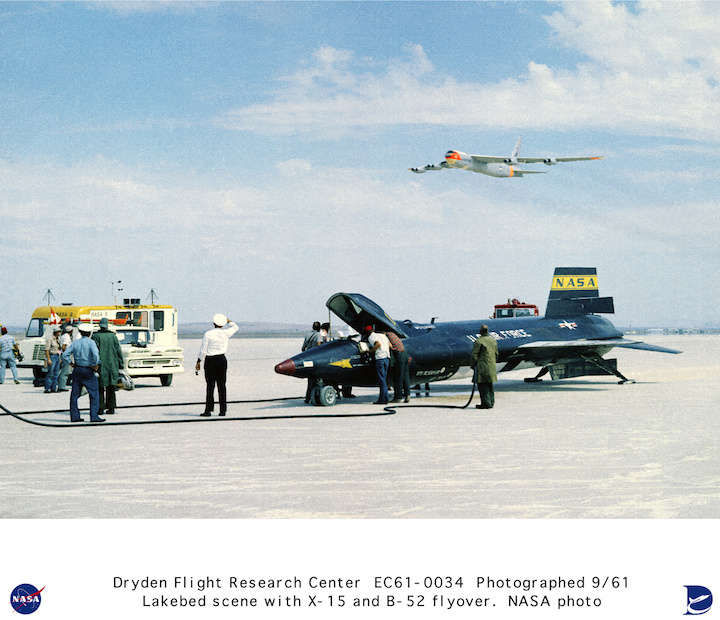 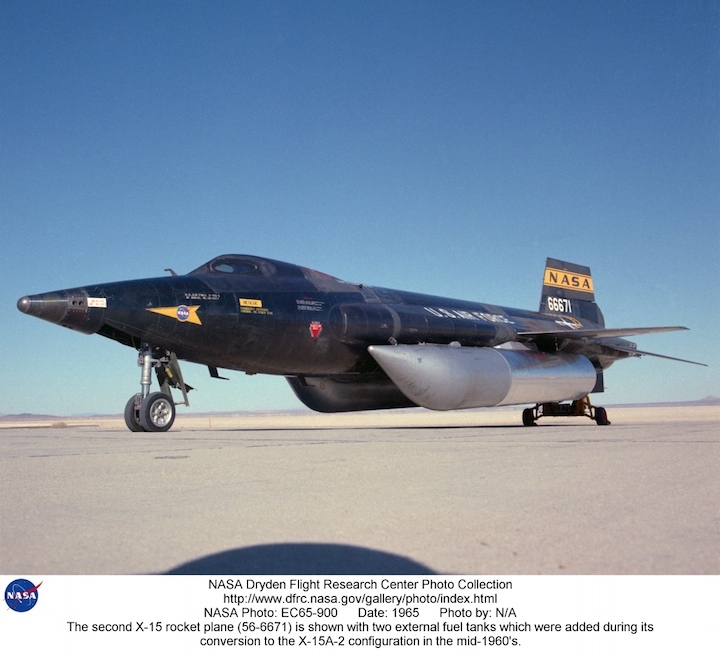 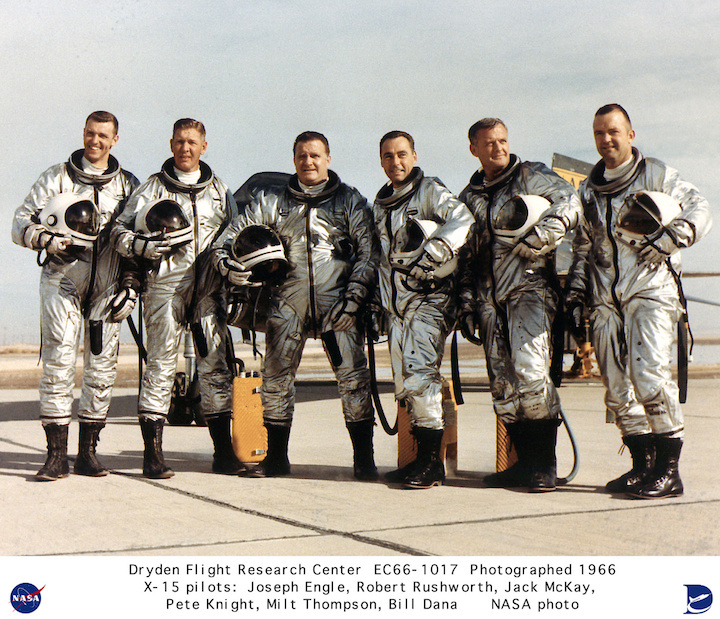 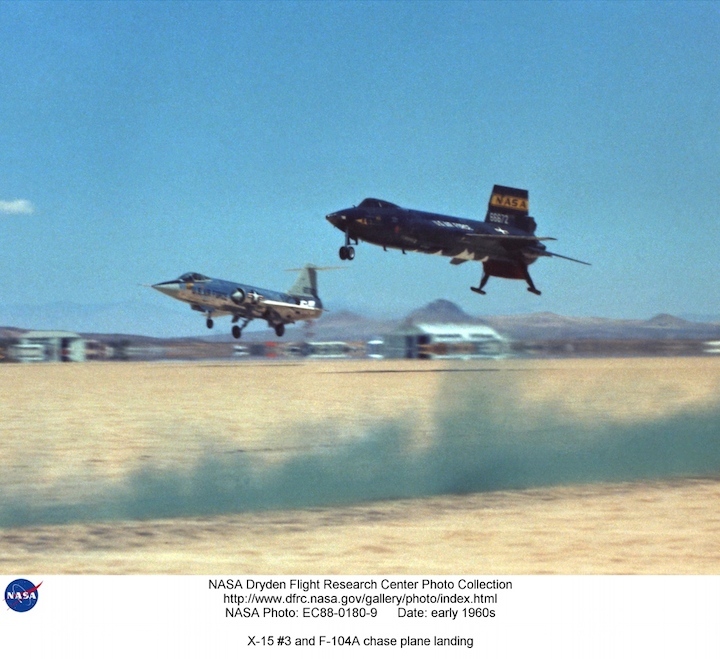 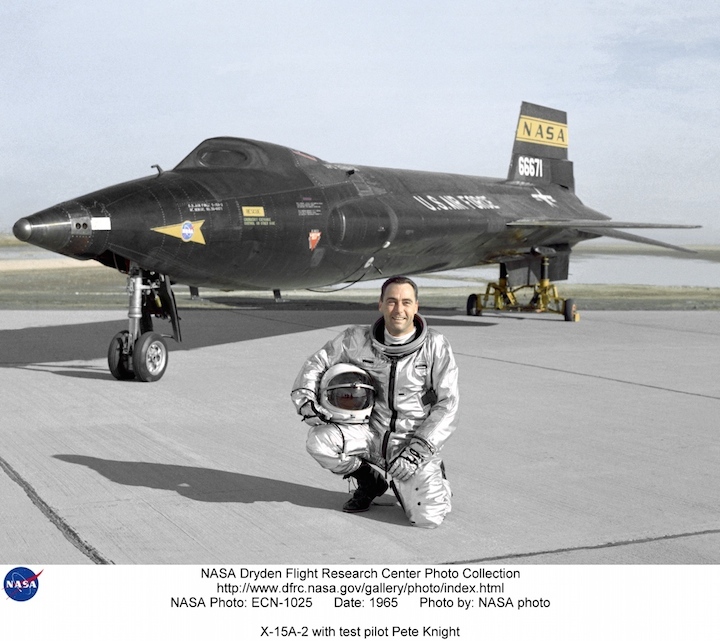