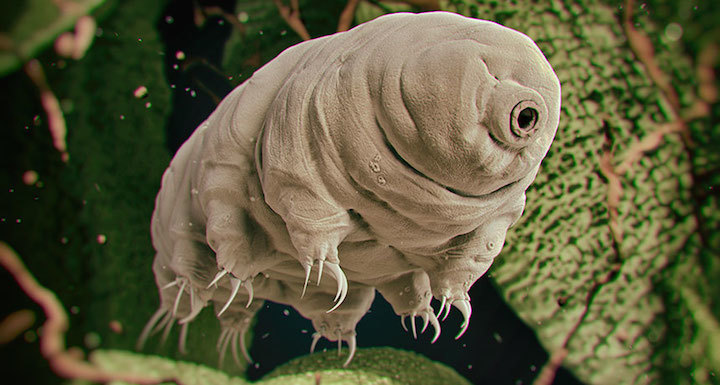 LIFE GOES ON  They may look like microscopic caterpillars, but don’t let their quaint appearance fool you — water bears are no joke. These creatures, shown here in a 3-D rendered illustration, will probably soldier on long after humans are gone.

These tough little buggers, also known as tardigrades, could keep calm and carry on until the sun boils Earth’s oceans away billions of years from now, according to a new study that examined water bears’ resistance to various astronomical disasters. This finding, published July 14 in Scientific Reports, suggests that complex life can be extremely difficult to destroy, which bodes well for anyone hoping Earthlings have cosmic company.

Most previous studies of apocalyptic astronomical events — like asteroid impacts, neighboring stars going supernova or insanely energetic explosions called gamma-ray bursts — focused on their threat to humankind. But researchers wanted to know what it would take to annihilate one of the world’s most resilient creatures, so they turned to tardigrades.

The tardigrade is basically the poster child for extremophiles. These hardy, microscopic critters are up for anything. Decades without food or water? No problem. Temperatures plummeting to –272° Celsius or skyrocketing to 150°? Bring it on. Even the crushing pressure of deep seas, the vacuum of outer space and exposure to extreme radiation don’t bother water bears.

Water bears are so sturdy that they probably won’t succumb to nuclear war, global warming or any astronomical events that wreak havoc on Earth’s atmosphere — all of which could doom humans, says Harvard University astrophysicist Avi Loeb. To exterminate tardigrades, something would have to boil the oceans away (no more water means no more water bears). So Loeb and colleagues calculated just how big an asteroid, how strong a supernova, or how powerful a gamma-ray burst would have to be to inject that much energy into Earth’s oceans.

Loeb’s team found that there are only 19 asteroids in the solar system sufficiently massive enough to eradicate water bears, and none are on a collision course with Earth. A supernova — the explosion of a massive star after it burns through its fuel — would have to happen within 0.13 light-years of Earth, and the closest star big enough to go supernova is nearly 147 light-years away. And gamma-ray bursts — thought to result from especially powerful supernovas or stellar collisions — are so rare that the researchers calculated that, over a billion years, there’s only about a 1 in 3 billion chance of one killing off tardigrades.

“Makes me wish I were an extremophile like a tardigrade,” says Edward Guinan, an astrophysicist at Villanova University in Pennsylvania who was not involved in the work.

But even tardigrades can’t cheat death forever. In the next seven billion years, the sun will swell into a red giant star, potentially engulfing Earth and surely sizzling away its water. But the fact that tardigrades are so resistant to other potential apocalypses in the interim implies that “life is tough, once it gets going,” Shostak says.