A team of amateurs observers, some armed with just 3-inch telescopes, have found that the main-belt asteroid 113 Amalthea probably has a small companion.

Each year, amateur astronomers get worldwide predictions for hundreds of events during which a distant asteroid briefly occults (hides) a star. But some of these cover-ups — like the one involving asteroid 113 Amalthea last March 14th — are anticipated more eagerly than others.

That date has been circled on Paul Maley's calendar for about 8 months. A retired NASA staffer and a key member of the International Occultation Timing Association, last year Maley started enlisting amateur observers in Texas to observe the occultation of a 10th-magnitude star by 13th-magnitude Amalthea. And all that planning paid off, because the observing team has discovered that this asteroid probably has a small satellite.

It's a robust "probably." As detailed in the IAU's Electronic Telegram 4413, issued on July 12th, a "fence" of 10 observing sites spread across the occultation's predicted path yielded seven positive occultations and three "misses." One of those misses, by Sam Insana in Gila Bend, Arizona, fell between five positive occultation tracks to his north and two to his south. It's colored orange in the diagram below: 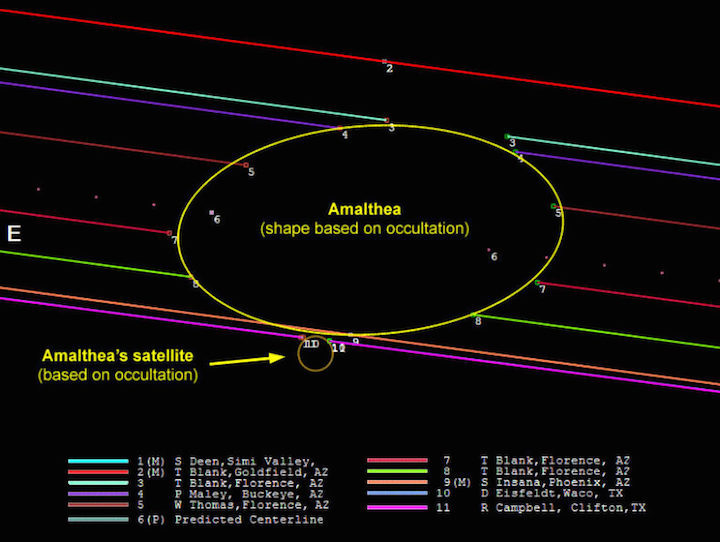 These lines represent the projected paths of a 10th-magnitude star recorded by observers on March 14, 2017, as the star passed behind the asteroid Amalthea. The small brown circle just below the yellow oval correspond to the location of the asteroid's moon at the time.
IOTA / Brad Timerson

In other words, Insana was fortuitously positioned in the gap between Amalthea and its moon. The two short breaks recorded by Dave Eisfeldt and Dick Campbell (Central Texas Astronomical Society) correspond to interruptions of the star's light by the moon. "This is the first time that two chords have been observed across a previously unknown minor-planet satellite," comments Daniel W. E. Green in the announcement. Other members of the team were Sam Deen, Wayne Thomas, Paul Facuna, Don Boyd, and Ted Blank (who set up four robotic cameras for the event).

"This was entirely a team effort," Maley says, "and the results were completely unexpected since we never know what a particular occultation will reveal." But deep down, he's elated — and feeling vindicated. "This is especially important to me since my initial observation of a secondary occultation in March 1977 involving a 3.6-magnitude star occultation by 6 Hebe occurred almost to the day 40 years ago," he explains. "That observation was greeted with complete skepticism and still has not been confirmed."

Asteroid 113 Amalthea orbits within the inner part of the main asteroid belt, not far outside the orbit of Mars.
JPL / Horizons

Not to be confused with Jupiter's small satellite of the same name, Amalthea orbits the Sun every 3.66 years in a reasonably circular orbit that averages 2.37 astronomical units (324 million km) from the Sun with an inclination of 5°. Discovered in 1871, it's about 46 km across and has a rocky "S type" surface spectrum, which is typical for the bodies that populate the inner main belt. Based on the lengths of each occultation record and how they line up in the plot, Amalthea must have a distinctly elongated shape.

The size of the satellite isn't known, though typically such companions are much smaller than their hosts. According to the definitive compilation by Wm. Robert Johnston, the census of asteroids with moons now includes 133 main-belt asteroids (8 with two each), 22 Mars crossing asteroids (1 with two), and 62 near-Earth asteroids (2 with two each). Looking farther outward, Johnston's listing includes 4 of Jupiter's Trojans and 81 trans-Neptunian objects.

Nor is it clear what kind of orbit the newfound companion might have. According to Green, small satellites around large main-belt asteroids typically have orbital radii roughly five times their primary's diameter, which here would correspond to about 230 km. But the observed gap was far smaller, so perhaps the companion's orbital plane was seen nearly edge-on with the satellite near one of its conjunction points (rather than being far off to one side).

Confirmation of the discovery might not have to wait long. Although no one had previously observed a stellar occultation by Amalthea, four are predicted for next year — including an April 14th event with a track that crosses the north-central U.S.