A Russian scientist and businessman today unveiled a social-media-savvy plan to create the first-ever nation in space, named Asgardia. But many of the details of the plan, including how Asgardia’s first satellite will be launched, haven’t yet been pinned down.

The mastermind behind Asgardia, which takes its name from the city of the skies in Norse mythology, is Igor Ashurbeyli. Five years ago, he left his position as the CEO of one of Russia’s top defense contractors, Almaz-Antey, and turned his attention to Socium Holding, a company he founded in 1988.

Ashurbeyli is also the founder of the Vienna-based Aerospace International Research Center and the editor-in-chief of a space journal called Room.

The idea is that once Ashurbeyli and his fellow Asgardians launch a satellite, that will open the way for them to designate the spacecraft as the first territory of a new nation in the sky. That would pose a challenge to the 1967 Outer Space Treaty, which appears to rule out assertions of sovereignty in space.

“Asgardia is a fully fledged and independent nation, and a future member of the United Nations – with all the attributes this status entails: a government and embassies, a flag, a national anthem and insignia, and so on,” Room quoted Ashurbeyli as saying during today’s news conference in Paris.

The website is already running contests to come up with the flag, the anthem and the insignia. It’s also letting anyone sign up for Asgardian citizenship. More than 16,000 registered today, and Ashurbeyli said the citizenry will be capped at 100,000, at least for the initial phase of the Asgardian independence plan.

“We are not selling pieces of land on the moon, or water in Antarctica,” he said. “We’re actually not selling anything at all at the moment. Only after we have proven this idea with a confirmed launch of an equipped satellite may we begin talking about Asgardia’s budgets.”

So what about that satellite? Ashurbeyli declined to go into the “technical aspects and details,” other than to say he’s currently funding the Asgardia project with his own money.

“Of course we are going to make use of crowdfunding and sourcing, and private donations,” he said. “And we welcome cooperation with new partners and investors.”

The aim is to launch a satellite in 2017, to mark the 60th anniversary of the Soviet Union’s Sputnik launch. If that somehow happens, it could reopen the international debate over who owns what in outer space.

“The Asgardia project, among other things, may help prepare better answers to the future governance of outer space – a topic of major concern to the United Nations,” Joseph Pelton, former dean of the International Space University, said in a statement. “The exciting aspect of this initiative is its three-phase approach to providing broader access to space; promoting peace in outer space; and addressing cosmic hazards and planetary defense.”

Does Asgardia have any chance of getting off the ground? Even Ashurbeyli acknowledges that the idea sounds kooky.

“I wouldn’t be surprised if today or tomorrow, some or all of you write that some crazy Russian rocket scientist talked utter nonsense here today,” he said. “It would be worse if you write nothing at all!”

At least by that measure, Ashurbeyli won’t be disappointed.

Stop the planet, we want to get off. 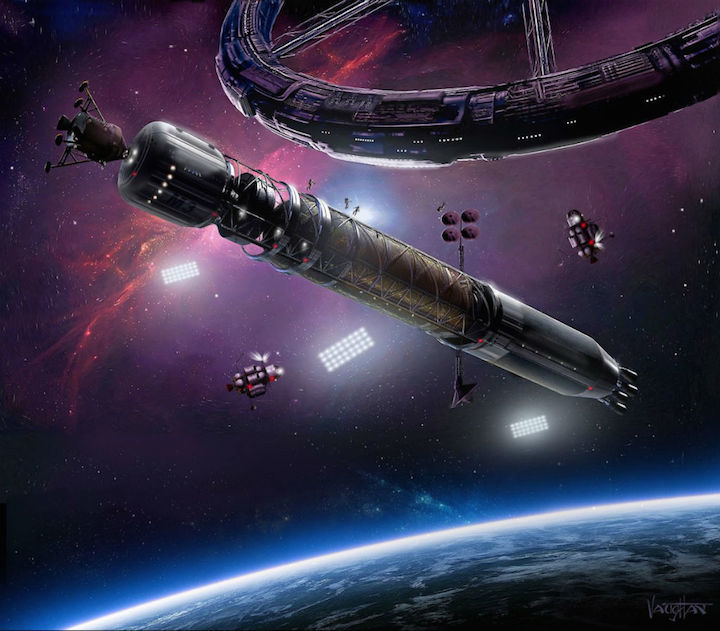 Custodians of the hypothetical 'space nation' Asgardia will be launching their first ever satellite in the coming months, and they've finally revealed their initial plans for the hundreds of thousands of people who have already applied for citizenship.

While more than 500,000 people have already registered their interest, the team behind the off-planet nation state announced that applications are still open, and more than 1 million 'citizens' will be given the opportunity to store data on their satellite, free of charge and free from Earthly laws and regulations.

"These are historic days," said Russian scientist and 'Head of Nation', Igor Ashurbeyli, at the press conference this week in Hong Kong.

"[Y]our names and data will forever stay in the memory of the new space humanity, as they will be reinstalled on every following Asgardia satellite, orbital satellite constellations, on the Moon, and anywhere in the Universe - wherever Asgardia will be."

For those who missed the hype, late last year an international group of scientists announced plans to establish Asgardia - a permanent space station that will house space tourists, run asteroid mining missions, and provide defence for Earth against meteorites, space debris, and other serious threats.

When they opened up applications in October, they said the first 100,000 applicants would be granted citizenship of Asgardia alongside their nationality on Earth.

But since then, more than 500,000 people have registered their interest, and in response to the influx, the Asgardian team has expanded their plans to let more than a million people take part in the initial stages of their plans.

"After they have accepted the Constitution, Asgardians are encouraged to send their files to space," the researchers explain.

The group plans to launch their satellite by September 2017, piggybacking on a supply mission to the International Space Station (ISS).

The tiny CubeSat satellite - measuring approximately 10 cm on each side, and weighing around 1 kilogram - will carry a 512GB solid state drive pre-loaded with data.

But before that happens, some housekeeping must be sorted out, so on June 18, the Asgardian flag, insignia, and national anthem are set to be finalised.

In six months' time, the group expects to have the first Parliament of Asgardia established.

Of course, there's no telling when or if the actual point of all this - that lawless off-planet settlement - will ever actually become a reality, but it's certainly fun to think about.

Case in point: this amazing set of "Frequently Asked Questions" on the Asgardia website.

Here are a few highlights:

God speed, you crazy dreamers. We can't wait to see what happens next.