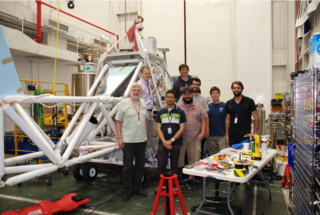 Gaining more detailed views of star formation and other galactic phenomena as well as detecting the faint quantum gravity signature from the first moments after the Big Bang are the goals of NASA's 2017 Scientific Balloon Campaign at the agency's Columbia Scientific Balloon Facility (CSBF) in Palestine, Texas.

The campaign has officially kicked off with three nighttime balloon flights planned.

BETTII, launching via a 39.57-million-cubic-foot scientific balloon comparable in size to a football stadium, is flight ready with a launch attempt planned Thursday, June 8, pending weather. This initial flight is focused on the testing and characterization of the payload to lay the groundwork for future flights studying star formation and the nuclei of galaxies. Data acquired with BETTII will be complimentary to observations with space observatories such as Herschel and the James Webb Space Telescope.

The SuperBIT payload combines highly-precise, milli-arcsecond pointing with a telescope operating within and just outside the visible light spectrum for conducting galactic observations. PIPER is a telescope super-cooled for increased sensitivity to detect the faint, remnant heat radiation from the Big Bang.

Actual launch dates for all the payloads will largely depend on weather conditions at the site.

All three missions require nighttime flight to conduct their science missions. While most scientific balloon launches occur during early morning hours, weather conditions at the CSBF site in late spring and early summer are particularly conducive for afternoon launch operations, making it ideal for missions with short duration, nighttime flight requirements. The flights flying this year are all slated to run about 8 hours at float.

At the conclusion of the mission Friday, June 9, NASA conducted an analysis of atmospheric conditions and a survey of the operational area as part of a safety analysis in preparation for flight termination. Once the balloon reached a safe flight termination area, characterized by sparse population but still relatively accessible via roads, flight controllers at CSBF sent flight termination commands to separate the parachute/payload from the balloon.

After the commands were sent, the connection between the payload gondola and parachute failed. The payload separated from the parachute and free fell to the ground in a remote, wooded area northeast of Sterling City, Texas, resulting in the loss of the payload.

“It’s important to note that our safety analysis conducted before flight termination factors in a scenario like this one,” said Debbie Fairbrother, NASA’s Balloon Program Office chief. “While this was not the expected outcome, it was an outcome safely reached, due to the thorough analysis conducted prior to ending the flight. No injuries or property damage occurred during the termination phase of the mission.”

Crews have recovered the balloon and parachute; recovery of the payload is expected to occur over the next several days given the remote location of the site.