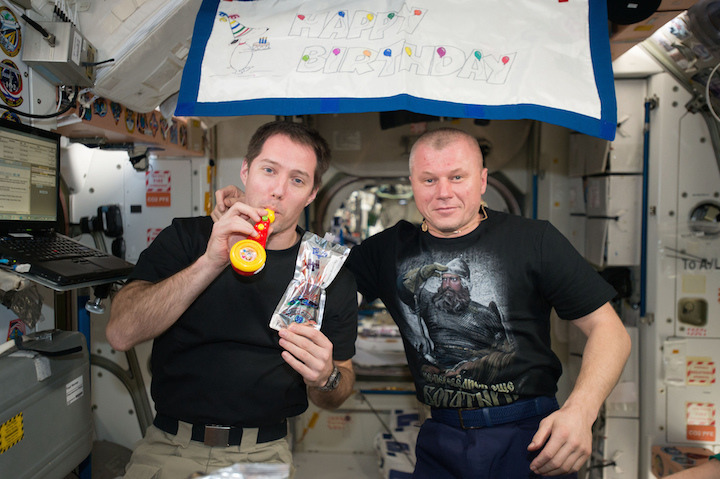 Two crew members on the International Space Station are scheduled to depart the orbital outpost Friday, June 2. Coverage of their departure and return to Earth will air live on NASA Television and the agency’s website beginning Thursday, June 1, with the space station change of command ceremony.

Together, the Expedition 51 crew members pursued hundreds of experiments in biology, biotechnology, physical science and Earth science aboard humanity’s only orbiting laboratory. Their return will wrap up 196 days in space, since their launch on Nov. 18, 2016.

NASA TV will air coverage of the departure and landing activities at the following dates and times:

At the time of undocking, Expedition 52 will begin aboard the station under the command of Fyodor Yurchikhin. Along with his crewmates Peggy Whitson and Jack Fischer of NASA, the three-person crew will operate the station until the arrival of three new crew members. Randy Bresnik of NASA, Sergey Ryazanskiy of Roscosmos, and Italian astronaut Paolo Nespoli of ESA are scheduled to launch July 28 from Baikonur, Kazakhstan. 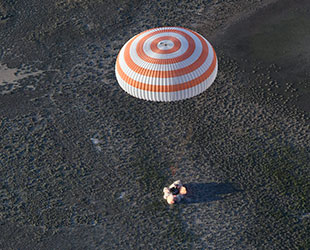 — A Russian cosmonaut and an astronaut from France returned from the International Space Station on Friday (June 2), landing with one fewer crewmate than when they left Earth six and a half months ago.

Oleg Novitskiy of Russia's space agency Roscosmos and Thomas Pesquet with the European Space Agency (ESA) touched down on the steppe of Kazakhstan on board the Russian Soyuz MS-03 spacecraft at 10:10 a.m. EDT (1410 GMT or 8:10 p.m. local Kazakh time).

Their parachute-assisted landing wrapped up 196 days in space since their launch on Nov. 17, 2016 — together with NASA astronaut Peggy Whitson.

"We're a little bit sad to leave her behind," said Pesquet on Thursday (June 1), a day before he left the space station.

Whitson had originally been slated to land with her launch crewmates, Novitskiy and Pesquet. An available seat on a subsequent Soyuz launched in April allowed her mission to be extended. She will now return to Earth with cosmonaut Fyodor Yurchikhin and astronaut Jack Fischer when they land in September. 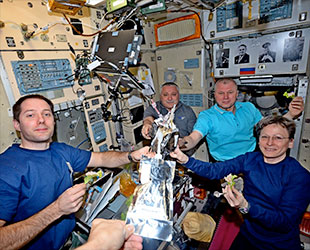 A record-setting astronaut, including being the only woman to command the space station twice, Whitson has already spent more time in space over the course of her three trips to orbit than any other American or woman worldwide.

"I just want to say for Oleg and me, we are really proud of being part of such a team and flying with Peggy. Peggy is a legend, but she is also absolutely unbelievable to work with or just hang around with and live with in space," said Pesquet.

"We are, of course, going to miss Oleg and Thomas," said Whitson. "They're exceptional astronauts in every sense of the word. But mostly, we are going to miss their sense of humor and camaraderie."

Novitskiy and Pesquet served on the space station's 50thand 51st expedition crews. Their undocking aboard Soyuz MS-03 from the orbiting complex's Rassvet module at 6:47 a.m. EDT (1047 GMT) marked the beginning of Expedition 52 with Yurchikhin in command.

Three more crewmates, Sergei Ryazansky of Roscosmos, Randy Bresnik of NASA and Paolo Nespoli of ESA, are set to launch on Soyuz MS-05 on July 28.

During Novitskiy and Pesquet's time in space, they helped to conduct a multitude of science experiments, including a payload of European investigations flown to the station as part of Pesquet's "Proxima" mission. The two also saw the departure of the Russian Progress MS-03 cargo craft and arrival of Progress MS-05, as well as helped receive and unpack the "S.S. John Glenn," a U.S. commercial freighter launched by Orbital ATK for NASA. 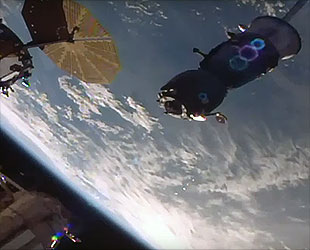 Pesquet also went out on two spacewalks with Expedition 50 commander Shane Kimbrough to connect a new set of batteries on the exterior of the station and to prepare one of the outpost's ports for the future installation of a docking adapter to support U.S. commercial crew spacecraft.

In total, Pesquet logged 12 hours and 32 minutes on the extravehicular activities (EVA), the first two of his career.

"It's been a fantastic adventure and amazing ride," wrote Pesquet on Twitter on Friday of his time in orbit, which was also his first time flying in space. Pesquet, 39, is the tenth French astronaut and the last of the 2009 ESA astronauts, nicknamed the "Shenanigans," to fly in space. 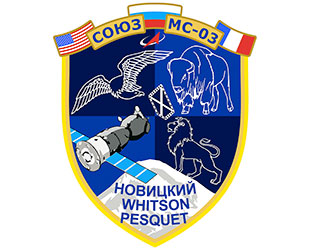 Pesquet's and his return to Earth marked the first two-man Soyuz landing since March 2010, when cosmonaut Maxim Surayev and astronaut Jeff Williams completed Expedition 21 on board Soyuz TMA-16.

Whitson's empty seat aboard Soyuz MS-03 was filled with a cargo carrier for the return to Earth.

Now safely home from space, Novitskiy and Pesquet will be flown to the Kazakh town of Karaganda for a traditional welcome ceremony and then they will split ways, Novitskiy flying to Star City in Russia and Pesquet heading for the European Astronaut Center in Cologne, Germany.

Soyuz MS-03 was the 49th Soyuz to fly to the International Space Station. It traveled 82.9 million miles (133.4 million kilometers) over the course of 3,136 orbits of Earth.

Leaving crewmate Peggy Whitson behind in orbit for an extended mission, a Russian cosmonaut and his French co-pilot undocked from the International Space Station early Friday, setting the stage for a fiery plunge to Earth and a landing on the steppe of Kazakhstan to close out a 196-day mission.

After moving a safe distance away, Novitskiy planned to oversee an automated four-minute 36-second de-orbit rocket firing starting at 9:17 a.m. to slow the spacecraft by about 286 mph, just enough to drop the far side of the orbit into the atmosphere.

If all goes well, the Soyuz MS-03 crew compartment will drop to a parachute-and-rocket-assisted touchdown 89 miles southeast of Dzhezkazgan, Kazakhstan, at 10:10 a.m. (8:10 p.m. local time), the first landing by a two-person Soyuz crew since March 18, 2010, when astronaut Jeff Williams and cosmonaut Maxim Suraev came home.

As usual, Russian and European Space Agency recovery crews and flight surgeons were standing by to assist the returning station fliers as they begin re-adjusting to gravity. Novitskiy's total time in space over two missions will stand at 340 days while Pesquet will have logged 196 days aloft on his first flight.

"We are, of course, going to miss Oleg and Thomas," Whitson said Thursday, choking back tears. "They are exceptional astronauts in every sense of the word. But mostly, we're going to miss their sense of humor and camaraderie."

Said Pesquet: "It was a great adventure. Just want to say for me and Oleg, we were really proud to be part of such a team and fly with Peggy. Peggy's a legend, but she's also absolutely unbelievable to work with or just hang around with, live with in space."

Whitson flew into space with Novitskiy and Pesquet last Nov. 17. She originally expected to come home with them, but in April, her mission was extended to Sept. 3.

"We're a little bit sad to leave her behind, but we're not staying!" Pesquet laughed during a change-of-command ceremony Thursday. "We know she's in good hands. ... Now is the time for us to go back home to our friends and family, and we're happy. But it's also a bittersweet feeling because we know this is such a unique place that you sometimes get to experience only once. It was fantastic, thanks to everybody."

After initial medical checks and satellite phone calls to family and friends, Novitskiy and Pesquet will be flown by helicopter to the town of Karaganda for an official Kazakh welcome ceremony. Novitskiy then will board a Russian jet for the flight back to Star City near Moscow while Pesquet boards and ESA aircraft and returns to Cologne, Germany, for debriefing.

On Thursday, Whitson turned over command of the station to Yurchikhin.

"Today, I hand over (command) to Fyodor Yurchikhin, the only guy I've flown three times with," she said. "So welcome to your command."

"It's an honor for me working with you, Peggy," said Yurchikhin, speaking in English. "We use your experience in space, your soul, your smarts. The greatest person, an amazing person. Sometimes, everybody says Peggy is 'iron woman,' 'steel woman.' She's amazing woman, an amazing person in space. Thank you very much. So welcome on board to Expedition 52."

Yurchikhin and Fischer took off aboard the Soyuz MS-04 spacecraft on April 20. In a move to save money in the near term, the Russian federal space agency opted not to include a third crew member. After negotiations with Russian space managers, NASA decided to extend Whitson's mission to Sept. 3 when she will take the available seat on the MS-04 spacecraft and return to Earth with Yurchikhin and Fischer.

Keeping Whitson in space will enable additional research between the departure of Novitskiy and Pesquet and the arrival of Soyuz MS-05 commander Sergey Ryazanskiy, Randy Bresnik and ESA astronaut Paolo Nespoli on July 28. It also preserves the option for a two-person NASA spacewalk in an emergency.

Whitson is America's most experienced astronaut with 573 days in space over three missions as of Friday. When she returns to Earth Sept. 3, her cumulative time in space will stand at 666 days, moving her up to eighth in the world. Whitson is also No. 3 in the world in total spacewalk time with more than 60 hours of EVA time over 10 excursions. 
ESA astronaut Thomas Pesquet landed on the steppe of Kazakhstan today with Russian commander Oleg Novitsky in their Soyuz MS-03 spacecraft after six months in space. Touchdown was at 14:10 GMT after a four-hour flight from the International Space Station. The return was routine – or as routine as you can get for a ride that requires braking from 28 800 km/h to zero. The heatshield copes with the 1600°C as the spacecraft enters the atmosphere, parachutes and retrorockets provide the final braking, and moulded seats cushion the impact – but it is still a wild ride.

The next voyage will be more sedate as Thomas flies directly to ESA’s astronaut centre in Cologne, Germany, for debriefing and tests. Researchers are eager to investigate how his body has adapted to living in weightlessness for six months. Thomas took part in more than 60 experiments during his Proxima mission and set a new record for the number of hours spent on science in a week as part of an Expedition crew.

His experiments are helping to understand the human brain, ocean currents and radiation in space, how atoms behave and tested new spacecraft materials. Other highlights included his two spacewalks to improve and maintain the Space Station.

“Glad to see Thomas and Oleg back on Earth after another astounding mission,” comments David Parker, ESA’s Director of Human Spaceflight and Robotic Exploration. “The Space Station’s allure for researchers and space agencies is its continuous operation and ground teams around the world keep it running 24/7. “The next ESA astronaut to be launched will be Paolo Nespoli next month, ensuring science and technology demonstrations in space continue for the benefit of humankind.”