Found: A Neptune-sized planet with sulfur-rich clouds and a watery atmosphere 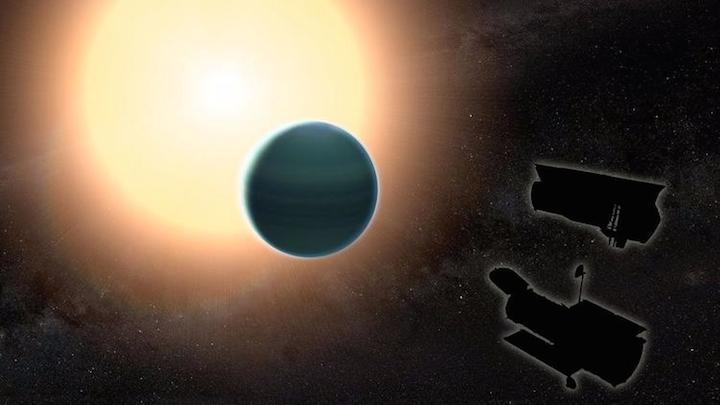 The atmosphere of "warm Neptune" HAT-P-26b, depicted here, has surprisingly few heavy elements, and is composed primarily of hydrogen and helium. (NASA/GSFC)

Scientists peering at a “warm Neptune” roughly 430 light-years away have discovered far less water in the gassy planet’s atmosphere than they expected — which puts it at odds with the ice giants in our own solar system.

The atmosphere of HAT-P-26b, described in the journal Science, runs counter to some long-standing theories about planetary development and could help scientists understand the diversity of worlds beyond our own.

“This is providing insight into how planets could form and evolve different than our solar system,” said lead author Hannah Wakeford, an astrophysicist at NASA Goddard Space Flight Center. “And that really tells us about how unique or easy it is to form a solar system like our own.”

When astronomers first began to find exoplanets around distant stars, they mostly found “hot Jupiters” — planets that were sometimes many times the size of our largest planet and sat very close to their host star. (These were the easiest to find at first, because they circled frequently and blocked a fairly large share of starlight.)

But the bumper crops of worlds that have followed in recent years have shown that the most common of planets might not be Earth-like rocks or Saturn-like gas balls, but Neptune-sized planets caught in the middle range.

In terms of composition, large gas giants like Jupiter are close to stars — they’re enormous balls of hydrogen and helium with a tiny sprinkling of heavier elements. (Astronomers typically refer to anything heavier than helium as a “metal.”) Among the gassy planets in our solar system, there’s a clear pattern: the smaller the planet, the greater the share of heavy elements. Jupiter’s metallicity is five times that of the sun, while slightly smaller Saturn has a metallicity that’s 10 times the Sun’s. Neptune and Uranus have metallicities that are 100 times higher.

Scientists think that Neptune and Uranus formed farther out in the disc of gas and dust that circled our nascent star, incorporating plenty of ices rich in heavier elements. Saturn and Jupiter, on the other hand, formed in a relatively warmer part of the disc with less ice, and so have fewer ‘metals’ in their bodies.

But HAT-P-26b is a warm Neptune, not a cold one. Unlike any of the gassy planets in our solar system, it sits close enough to its host star that its surface temperature is roughly 1320 degrees Fahrenheit. Studying its atmosphere could tell researchers which formation theories hold up in distant planetary systems.

As the planet passes in front of its host star, some starlight filters through the atmosphere, where its unique mix of chemicals absorbs some wavelengths and allows others to pass. By examining which wavelengths are missing, researchers can work backwards to determine what chemicals were present.

The researchers found low clouds of disodium sulfide, and above that an atmosphere full of water vapor.

“It’s going to be like D.C. on a really horrible summer day,” Wakeford said.

Since the oxygen in water counts as a “metal,” the scientists could extrapolate the overall metallicity from the water’s abundance. And they found, in spite of the D.C.-like humidity, that the metallicity of this Neptune-sized planet was surprisingly low — about 4.8 times the sun’s, or roughly the same as Jupiter.

“That tells us a little bit about where this planet likely formed,” Wakeford said. “And that means that it probably formed much closer to its star, or later in the disc lifetime where it wasn’t bombarded by icy debris and rich heavy elements whilst it was forming.”

So which theory is correct? It could potentially be a combination of the two, Wakeford said — but for the moment it’s hard to say, given how many unknowns there still are.

“We did not know that you could form these-sized planets closer to their star,” Wakeford said. “We only really have our solar system to go by on this. So it’s really interesting to see this diversity from exoplanets.”

Future instruments, like NASA’s James Webb Space Telescope set for launch in 2018, should be able to answer that question by proving even more planetary atmospheres.