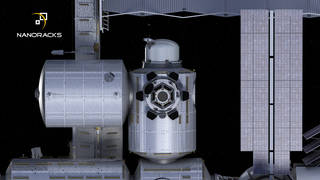 NASA has accepted a proposal from NanoRacks to develop the first commercially funded airlock on the space station. NASA anticipates the airlock will launch on a commercial resupply mission for integration in 2019, and will be located on a port in the space station’s Tranquility module.
Credits: NanoRacks

The International Space Station allows NASA to conduct cutting-edge research and technology demonstrations for the next giant leap in human exploration and supports an emerging space economy in low-Earth orbit. Deployment of CubeSats and other small satellite payloads from the orbiting laboratory by commercial customers and NASA has increased in recent years. To support demand, NASA has accepted a proposal from NanoRacks to develop the first commercially funded airlock on the space station.

“We want to utilize the space station to expose the commercial sector to new and novel uses of space, ultimately creating a new economy in low-Earth orbit for scientific research, technology development and human and cargo transportation,” said Sam Scimemi, director, ISS Division at NASA Headquarters in Washington. “We hope this new airlock will allow a diverse community to experiment and develop opportunities in space for the commercial sector.”

In addition to the large number of CubeSats and small satellites NanoRacks wants to deploy from station, their proposed airlock will also be capable of supporting multiple external payloads.

Signaling a significant step forward in their airlock plans, NanoRacks announced an independent partnership with Boeing on Feb. 6, 2017, to develop the airlock. Once NanoRacks successfully completes the phases outlined in a Space Act Agreement NanoRacks signed with NASA in 2016, the agency has committed to install the airlock for commercial use, research, and technology demonstrations from the International Space Station.

Payloads, including commercial payloads, deployed via the airlock will be coordinated through the Center for the Advancement of Science in Space (CASIS), NASA’s manager of the U.S. National Laboratory on the space station. All non-NASA funded payloads for the U.S. National Lab are subject to the vetting process CASIS has established.

NASA anticipates the airlock will launch on a commercial resupply mission for integration in 2019, and will be located on a port in the space station’s Tranquility module.

Attached to a separate port on Tranquility is another commercial investment – the Bigelow Expandable Activity Module (BEAM). This module is the first human-rated expandable habitat to be tested in space and has potential application for future habitation in low-Earth orbit and deep space.

The NanoRacks Airlock and BEAM are two examples of NASA’s larger efforts to maximize use of the space station and advance commercial activity in space. NASA also issued a request for information last fall seeking additional interest on the part of private enterprises to use available unique space station resources, such as docking ports. As private sector partners play a greater role in this new economy, NASA is able to focus on its deep space exploration goals, including sending humans beyond the moon and eventually, to Mars.
Quelle: NASA
« Zum vorherigen Eintrag Zum nächsten Eintrag »
1586 Views
Created with page4