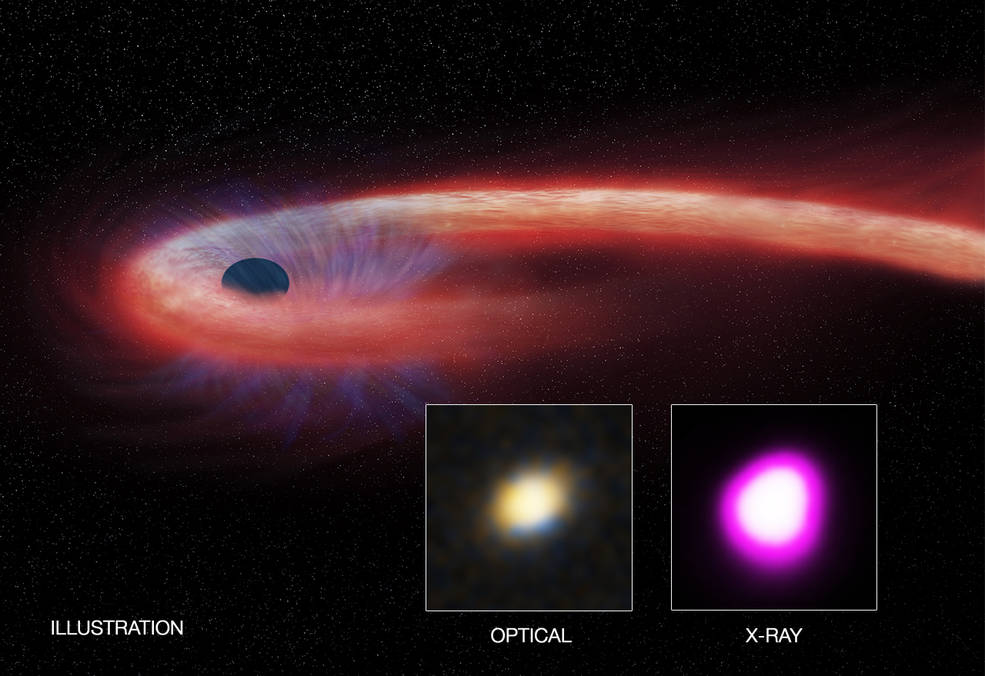 A giant black hole ripped apart a star and then gorged on its remains for about a decade, according to astronomers. This is more than ten times longer than any observed episode of a star’s death by black hole.

Researchers made this discovery using data from NASA’s Chandra X-ray Observatory and Swift satellite as well as ESA’s XMM-Newton.

The trio of orbiting X-ray telescopes found evidence for a “tidal disruption event” (TDE), wherein the tidal forces due to the intense gravity from a black hole can destroy an object – such as a star – that wanders too close. During a TDE, some of the stellar debris is flung outward at high speeds, while the rest falls toward the black hole. As it travels inwards to be ingested by the black hole, the material becomes heats up to millions of degrees and generates a distinct X-ray flare.

“We have witnessed a star’s spectacular and prolonged demise,” said Dacheng Lin from the University of New Hampshire in Durham, New Hampshire, who led the study. “Dozens of tidal disruption events have been detected since the 1990s, but none that remained bright for nearly as long as this one.”

The X-ray source containing this force-fed black hole, known by its abbreviated name of XJ1500+0154, is located in a small galaxy about 1.8 billion light years from Earth.

The sharp X-ray vision of Chandra data shows that XJ1500+0154 is located at the center of its host galaxy, the expected location for a supermassive black hole.

The X-ray data also indicate that radiation from material surrounding this black hole has consistently surpassed the so-called Eddington limit, defined by a balance between the outward pressure of radiation from the hot gas and the inward pull of the gravity of the black hole.

“For most of the time we’ve been looking at this object, it has been growing rapidly,” said co-author James Guillochon of the Harvard-Smithsonian Center for Astrophysics in Cambridge, Mass. “This tells us something unusual – like a star twice as heavy as our Sun – is being fed into the black hole.”

“This event shows that black holes really can grow at extraordinarily high rates,” said co-author Stefanie Komossa of QianNan Normal University for Nationalities in Duyun City, China. “This may help understand how precocious black holes came to be.”

Based on the modeling by the researchers the black hole’s feeding supply should be significantly reduced in the next decade. This would result in XJ1500+0154 fading in X-ray brightness over the next several years.