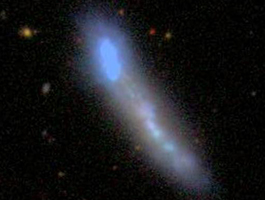 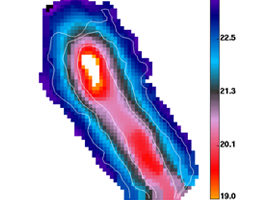 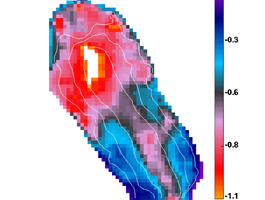 Application of RemoveYoung: Removal of emission associated to ongoing or recent star-formation (over the past 30 million years) in galaxy NGC3991. Credit: Jean Michel Gomes & Polychronis Papaderos (IA & University of Porto)

RemoveYoung1 is a new tool developed by Instituto de Astrofísica e Ciências do Espaço (IA2) astronomers Jean Michel Gomes and Polychronis Papaderos. It is designed to suppress, from galaxy images, the luminosity contribution of young stars. This new tool was presented yesterday by Gomes in an advanced course on stellar populations in galaxies, at the Institute of Astronomy of the University of Vienna.

Jean Michel Gomes (IA & University of Porto), co-leader of the SELGIFS3 work package Reconstruction of the Star Formation History comments that: “RemoveYoung can become an important tool in extragalactic astronomy. We have now a means to unveil the underlying old stellar populations of galaxies that were hidden by luminous massive stars.”
The optical appearance (morphology) of galaxies is the result of their evolutionary history, but how the assembly history of galaxies is imprinted on their present-day morphology is one of the most tantalizing enigmas in extragalactic research.

The morphology of star-forming galaxies is generally dominated by luminous massive young stars, which can outshine the important structural features of the older (and fainter) stellar background. This strongly limits insights into galaxy formation.

Polychronis Papaderos (IA & University of Porto), founding member and Co-Investigator of SELGIFS and scientist in charge of its Portuguese node comments that: “RemoveYoung exploits the combined power of population spectral synthesis and integral field spectroscopy to unravel the assembly history of galaxies.”

This technique has a variety of applications in star-forming galaxies, and can uncover, for example, tidal tails witnessing past galaxy interactions and mergers, lower mass starburst galaxies near and far, relics from faint dwarf galaxies captured by spiral galaxies, that have contributed to the growth of their discs, or even galactic bars made of old faint stars and being hidden beneath much brighter star-forming regions in the central parts of galaxies.

Jean Michel Gomes was invited by the director of the Institute of Astronomy at the University of Vienna, Prof. Bodo L. Ziegler to present this course on stellar populations in galaxies, which is an important milestone in an existing collaboration between both teams. The institutes have a collaboration within the CALIFA4 survey, focusing on The warm interstellar medium in early-type galaxies.