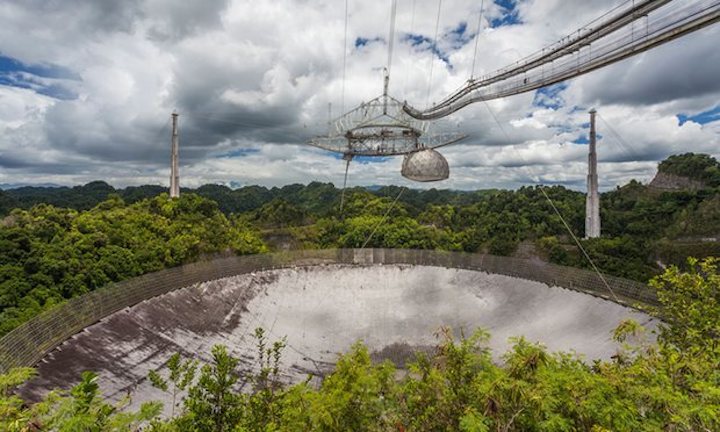 After 53 years, many discoveries and starring roles in movies, funds for the Puerto Rico observatory are under threat

It has helped guard our planet from the threat of wayward asteroids, studied some of the most remote bodies in the cosmos and been used to make countless invaluable astronomical discoveries. For good measure, the Arecibo radio telescope, one of the world’s largest observatories, provided the setting for the spectacular dispatch of evil agent Alec Trevelyan (played by Sean Bean) at the hands of James Bond (then played by Piers Brosnan) in the film GoldenEye.

But now the great radio telescope is facing closure. Despite being one of the most powerful instruments of its kind in the world, the Arecibo, which is based in Puerto Rico but funded by US science agencies, is facing the axe, a victim of federal budget cuts.

Arecibo’s annual running costs of around $12m are currently met by the US National Science Foundation (NSF), which provides $8m for the telescope to be used to carry out astronomical research, while Nasa, which employs the telescope to survey the sky for asteroids that might collide with Earth, provides the other $4m. The space agency says it is willing to continue making its contribution but insists that it cannot increase its funding beyond that level.

However, the foundation, which supports basic science projects in the US, has been operating on a capped budget for the past six years and says it now has to find money to fund a crop of new astronomical observatories that are about to come on line. These include the Large Synoptic Survey Telescope, which is now being built in Chile.

Scientists had acknowledged that something would have to be dropped from the foundation’s list of astronomical projects to make way for these new observatories. However, they were stunned to discover that the Arecibo, which also featured in the sci-fi alien encounter film Contact, starring Jodie Foster, was on the hit-list of telescopes being considered for closure.

“We have been given five choices,” said Nicholas White, senior vice-president of the Universities Space Research Association, which helps to manage Arecibo for the NSF. “We can keep Arecibo going; find another funder; turn it into a educational facility – in other words transform it into a museum; mothball it; or demolish it.”

However, the NSF has made it clear it lacks the cash to keep on funding the observatory. “We have tried the next best thing – to find new partners to fund Arecibo but it is proving very difficult to get people interested,” White told the Observer.

“All the other options would require the Arecibo to halt its current work and either become a museum or be mothballed or dismantled. From that perspective, the situation looks grim.”

Arecibo, which has a collecting dish 305m wide, was the largest radio telescope in the world until last year when the Chinese opened their 500m Aperture Spherical Radio Telescope (FAST) in Dawodang in southwest China. The instruments share a common feature, however: both nestle in natural depressions or sinkholes in the ground.

This has allowed engineers to construct vast dishes, supported by the rocks below, for collecting radio waves. Normal steerable dishes, such as Britain’s Jodrell Bank, have dishes that have to be supported by metal struts, which limits their size, though such telescopes have greater flexibility in terms of steering and pointing.

Arecibo was opened in 1964 and has since been used to make a host of groundbreaking discoveries. For example, in 1974 it was employed by Russell Hulse and Joseph Taylor, of Princeton University, New Jersey, to pinpoint a pair of neutron stars or pulsars in orbit round each other. The discovery, the first of a pulsar binary, was of immense importance in understanding gravitational theory and earned the pair the 1993 Nobel prize for physics.

In the same year, Arecibo was used to transmit a signal, now known as the Arecibo message, which carried basic information about humanity, directed to the star cluster known as M13, in the hope that an extraterrestrial civilisation might pick it up and decipher it.

More recently, Arecibo has played a key role in studying a new class of celestial events known as fast radio bursts, split-second blasts of radio waves that appear in the sky having travelled billions of light years across the cosmos. These were discovered 10 years ago and their cause remains a mystery. However, astronomers insist that the Arecibo is the perfect instrument to study them.

In addition, the Arecibo is one of the key instruments that form part of the Nanograv consortium, which uses several radio telescopes round the globe to study pulsars and aims to use these observations to detect and study gravitational waves. Without Arecibo, that work would be badly handicapped, they say.

The NSF is expected to release its final report on the future of Arecibo in May. This will include an environmental impact study that will even highlight the amount and type of explosive that will be required to demolish the observatory, should that be deemed to be its fate.

For their part, astronomers remain hopeful that the telescope can be saved. “Arecibo has a future,” its director, Francisco Cordova, told Nature recently. “However, it will be a different future.”