NASA has upgraded its website that provides daily views of the Earth from one million miles away. NASA’s Earth Polychromatic Imaging Camera (EPIC) camera imagery website was recently updated allowing the public to choose natural or enhanced color images of the Earth and even zoom into an area on the globe. 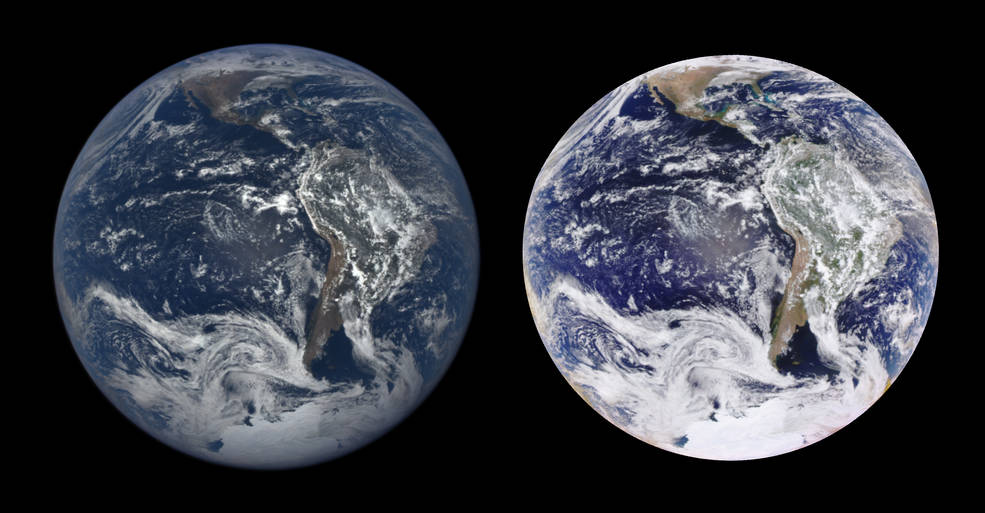 An EPIC Natural Color image (left) and an Enhanced Color image (right) of the Earth on January 26, 2017.
Credits: NASA/NOAA

EPIC is a four megapixel CCD camera and telescope aboard NOAA's DSCOVR satellite that takes 10 narrow-band spectral images of the entire sunlit face of Earth from 317 to 780 nanometers. EPIC takes a new picture approximately every hour from mid-April to mid-October or every two hours for the rest of the year. EPIC images reveal how the planet would look to human eyes, capturing the ever-changing motion of clouds and weather systems and the fixed features of Earth such as deserts, forests, and the distinct blues of different seas.

The website was initially launched in 2015 after NOAA's Deep Space Climate Observatory or DSCOVR satellite achieved orbit almost one million miles from Earth. DSCOVR is a NOAA Earth observation and space weather satellite launched by Space-X on a Falcon 9 launch vehicle on February 11, 2015 from Cape Canaveral, Florida. 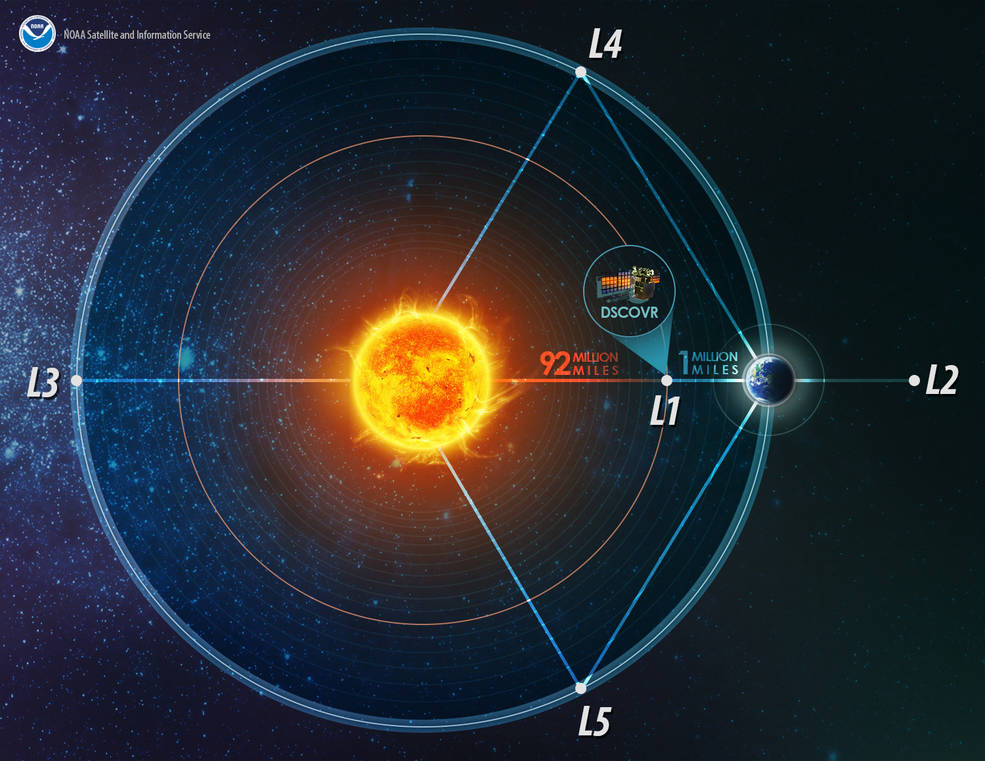 NOAA's DSCOVR satellite, positioned between the sun and Earth, is able to maintain a constant view of the sun and sun-lit side of Earth. This location is called Lagrange point 1. (Illustration is not to scale)
Credits: NOAA

The website upgrade includes a new magnification feature where users get a zoomed-in look at an area under their cursor. Magnified areas appear in a circular box on screen.

A new "Image Information" box on the left-hand side of the website allows for downloading the image on screen (by clicking on a down arrow). There is also information that provides the EPIC camera's distance to Earth and to the sun. The Sun-Earth-Vehicle angle is also listed.

Below the "Image Information" section is a new "Slideshow controls" section. Users can click on the right facing arrow (>) to move through all of the latest day's images. By clicking on the arrow, the viewer will see the images update as the Earth rotates, providing views of the whole planet.

The most recent images are always on the front of the webpage. To find images for a specific date, users can click on the date in the "slideshow controls" box, and a drop down calendar will allow selection of images from another date (other than the latest date).

A "filmstrip" of Earth images lines the bottom of the page. Those are the images taken by EPIC for that day that are selected by clicking the arrows or the thumbnails.

DSCOVR is a partnership between NOAA, NASA and the U.S. Air Force. NOAA is operating DSCOVR from its NOAA Satellite Operations Facility in Suitland, Maryland, and will process the space weather data at the Space Weather Prediction Center (SWPC) in Boulder, Colorado. From there, the SWPC will distribute the DSCOVR data to users within the United States and around the world. The data will be archived at NOAA’s National Geophysical Data Center, also in Boulder.