In the vast and beautiful land of Northern Sweden, 200 kilometers above the Arctic Circle, lies Esrange Space Center, which is celebrating its 50th anniversary this year. On October 22nd, customers and other stakeholders from the space industry all over the world will gather in Kiruna to celebrate this anniversary with events that includes an Executive Roundtable with Key Notes by the ESA General Director Jan Worner and the Swedish Space Minister Helen Hellmark-Knutsson, focusing on the coming 50 years of Esrange and space industrial development.

There will also be, an open house at the Space Center and a gala dinner in Kiruna city hall. Esrange Space Center (short from Esrange) is a rocket range and research center located a short 30 minutes' drive east of the town of Kiruna. It is a base for scientific research with high altitude balloons, investigation of the aurora borealis, sounding rocket launches, Satellite Management Services, and a future SmallSat launch capability called SmallSat Express.

The first rocket launch from Esrange occurred on 19 November 1966. In the first six years of Esrange, about 150 rockets were launched from Esrange, most with experiments involving basic research on the Aurora, ionosphere and atmospheric physics. Following this initial period, in 1972, ownership was transferred to the newly started Swedish Space Corporation (SSC). SSC expanded operations to included balloon launches. With rocket and balloon capabilities at Esrange in place, the assigned missions of Esrange, for sounding rockets and balloons, evolved to the support of the sounding rocket and balloon programs of the member states of the European Space Agency.

Rocket Activities
In its 50 year history, Esrange has launched 553 rockets. The impact zone for these rocket launches is located north of Esrange in the Swedish tundra region with a nominal impact point normally chosen which is situated 75 kilometers north of the launch pads. Launch vehicles can reach an altitude of 70 - 800 km and the payloads land and are recovered on ground within 0.5-1 hour after launch.

The vehicles, being missions of e.g. the Swedish national space program or as part of the microgravity research program of ESA, are launched from the Esrange Space Center above the polar circle, benefiting from an impact area over land of 5200 square kilometers. MASER is an SSC sounding rocket program with an international participation of users that provides 6-8 minutes of microgravity. The MASER program started 1987. MAXUS is a joint venture between SSC and Airbus DS that provides up to 14 minutes of microgravity. The MAXUS program started 1991.

Balloon Activities
The first stratospheric balloon was launched from Esrange Space Center in 1974 and since then 524 balloon launches have occurred, with the last balloon launch occurring earlier this month (Balloon-borne Experiments for University Students - 23). Launches are performed by the SSC launch team often in cooperation with the CNES launch team (France) or the CSBF launch team working for NASA (USA).

The balloon launch pad is the size of 40 American football fields. The impact zone for balloons launches covers the northern parts of Sweden, Norway, Finland, Russia, Canada and Alaska. The balloons fly with the wind at a height between 15 and 45 km and carries scientific instruments for research in atmospheric physics, astronomy and meteorology, and the balloons can also be used for drop tests and to perform control measurements to validate satellite measurements. There are many advantages launching scientific instruments with a stratospheric balloon from Esrange Space Center.

The geographical location is particularly important when you can fly a balloon in total sunlight for several days since the batteries that supply the instruments onboard with power can easily be recharged. Another advantage of the northern location is that Esrange Space Center is located on the edge of the so-called polar vortex. It is an area with strong currents in the stratosphere that is formed over the Arctic during winter months.

Polar vortex plays a significant role in ozone depletion. Therefore, there are many environmental scientists at Esrange during the winter to study the ozone problem. Some of the balloons can be twice as large as the Globe Arena in Stockholm, lift a payload of two tons and fly from Esrange Space Center to Alaska in just over four days. After a flight, both payload (experiment) and the balloon are brought back to Esrange Space Center by helicopter. The equipment is renovated since it can be flown again.

Launch Activities for University Students
Each year, Esrange conducts Rocket and Balloon Experiments for University Students (REXUS/BEXUS). This program allows students from universities and higher education colleges across Europe to carry out scientific and technological experiments on research rockets and balloons. Each year, two rockets and two balloons are launched, carrying up to 20 experiments designed and built by student teams. The REXUS/BEXUS program is realized under a bilateral Agency Agreement between the German Aerospace Center (DLR) and the Swedish National Space Board (SNSB). The Swedish share of the payload has been made available to students from other European countries through a collaboration with the European Space Agency (ESA).

Satellite Management Services
SSC has been servicing the satellite market since the early 1970s. With its long experience and extensive technical capabilities, SSC meets requirements for small satellite systems and constellations as well as large exquisite satellite programs. SSC Universal Space Network is an extensive global network of strategically located ground stations around the world. Located at Esrange Space Center is the busiest Satellite Operations Center and the largest ground station in SSC's Universal Space Network.

The service offers web-based and API customer interfaces for pass scheduling and is based on full motion antennas in the five meter or smaller class. SSC Infinity makes use of standard configurations and standardized ground system hardware. By limiting the number of mission configurations and utilizing pre-qualified radios, SSC has eliminated most of the costs associated with pre-mission configuration. The first SSC Infinity service is an important part of SSC's global network (Universal Space Network) that is constantly expanding with new capabilities.

The facility already has a well-equipped infrastructure and experience of range and launch safety as well as handling large rocket motors and launching of guided rockets. Apart from the launch service for small satellites, coordinated operations using satellites, sounding rockets, balloons and/or ground instrumentation will be possible.

The launch service is intended for around 1-200 kg satellites; however, CubeSats are the target payloads. The launch periods will be fixed. The service will enable a standardized orbit suitable for most small satellites; sun-synchronous orbit at 500 km altitude (inclination = 97.4 ) with the ascending node at 0600, 2200, and 1400 ("dawn-dusk" orbit) Local Solar Time.

By using the launch service on three consecutive launches a constellation of satellites covering every local time can be established. By adding the satellite launching services SSC can provide services from the early phases of a satellite project, to launches and to operate the satellites including downloading data using the universal space network and the Infinity services. The goal is to launch the first satellite in 2021.

Cutting Edge Opportunities
As the Space domain is rapidly developing into the New Space Era, so are SSC and Esrange. Clearly, exciting times lie ahead, but much too has been achieved for a company who has provided leading advanced space services to space programs all over the world over the past 50 years.

Close co-operation with the various major space institutions and space industries on all continents has proved particularly valuable to the evolution. It has positioned SSC at the cutting edge in advanced space services for the new era approaching, why SSC with Esrange is sure to unlock a fascinating new chapter to truly help earth benefit from space also the coming 50 years. 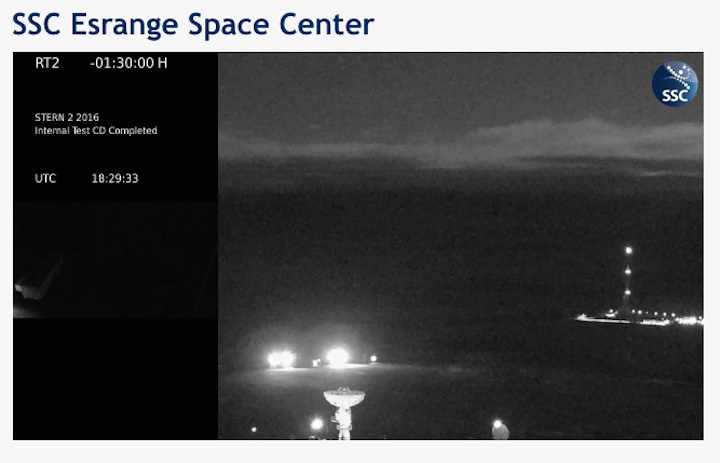 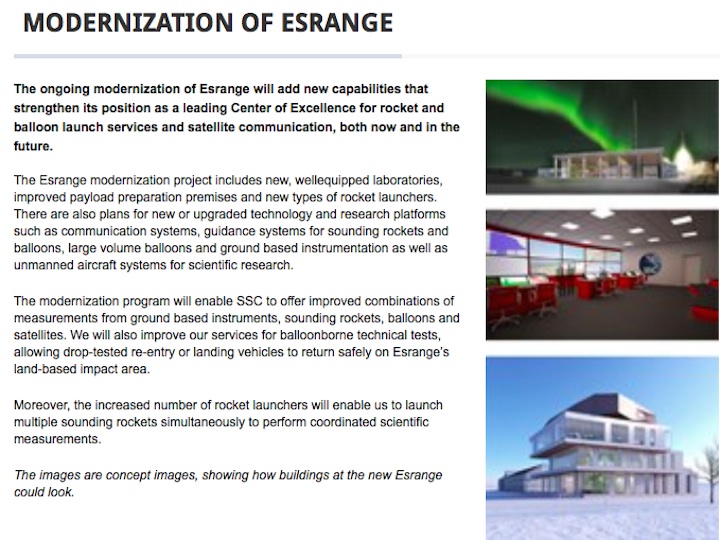 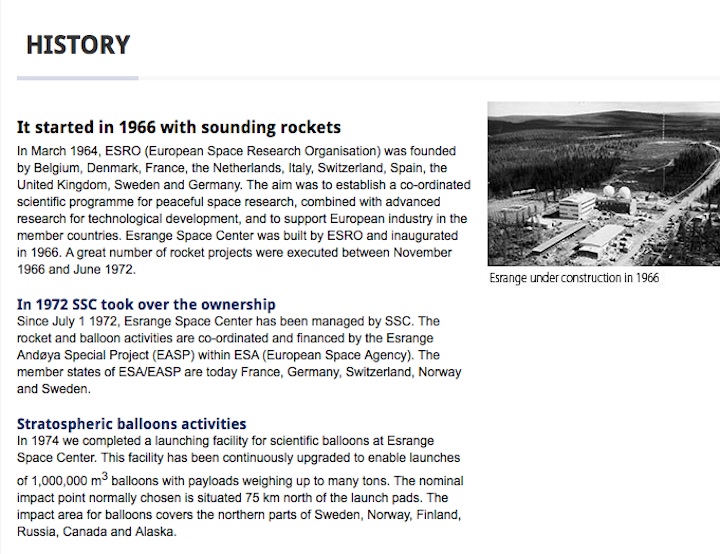 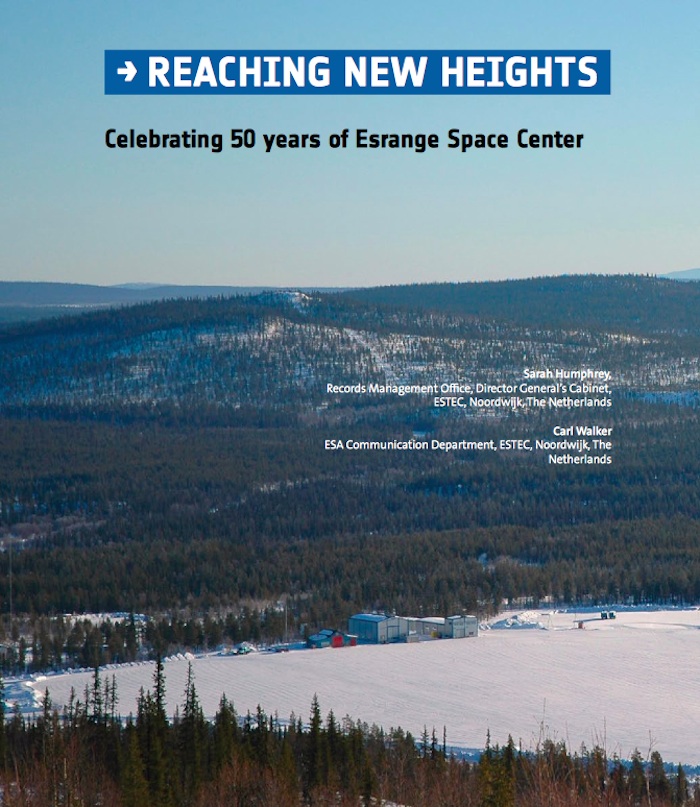 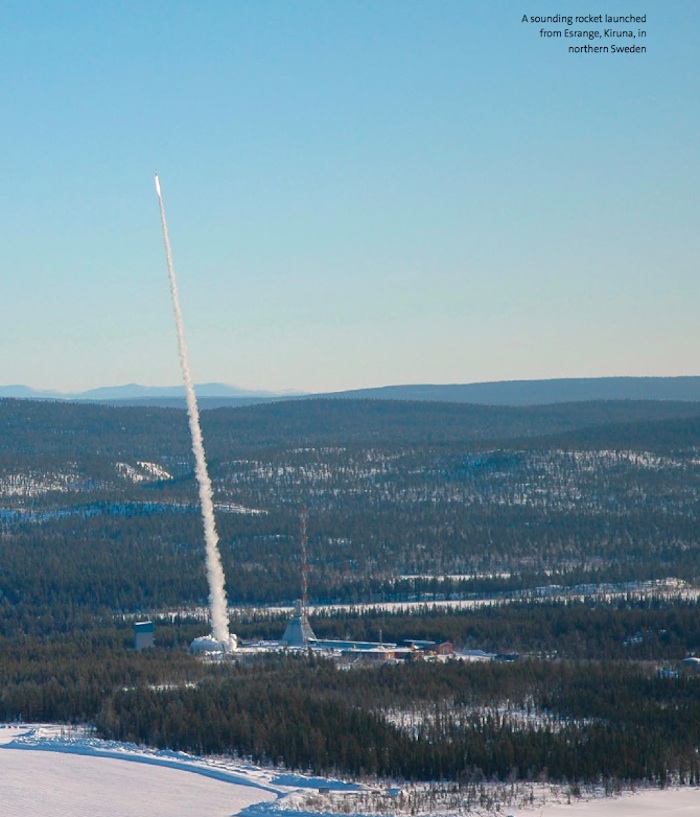 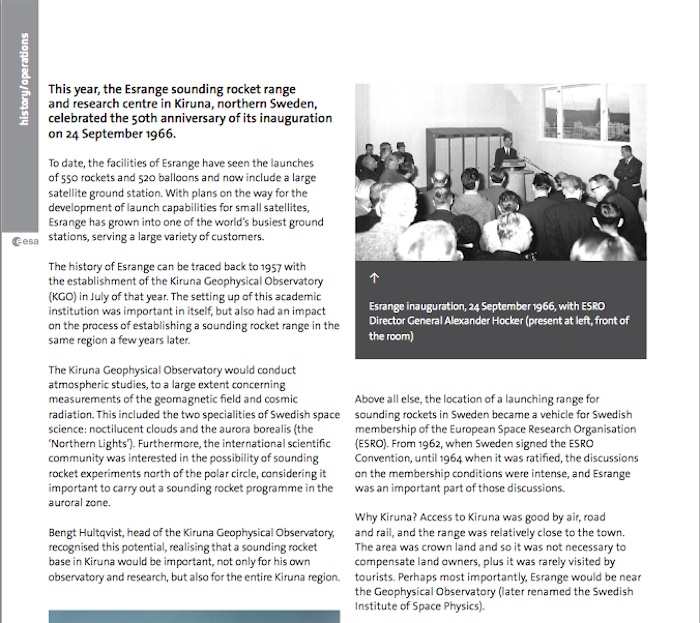 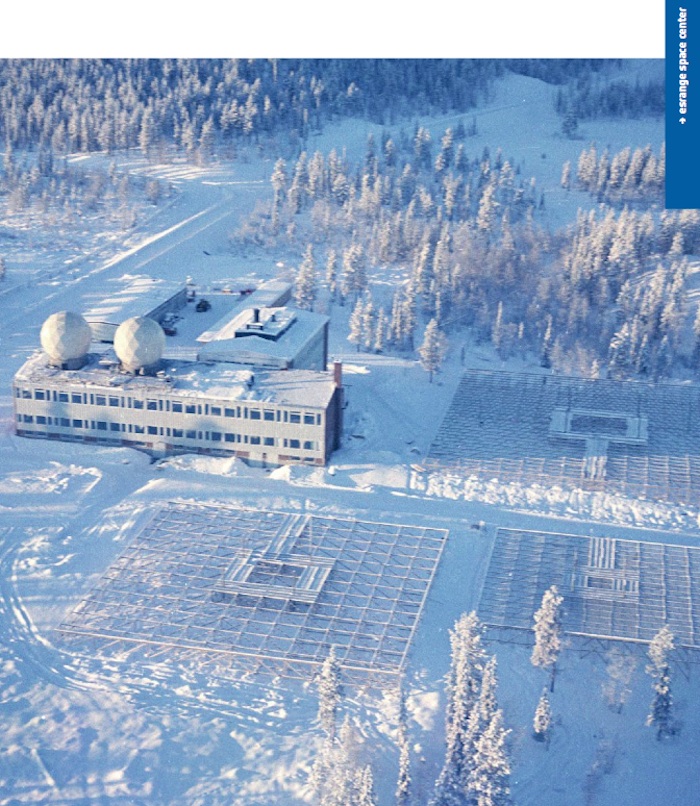 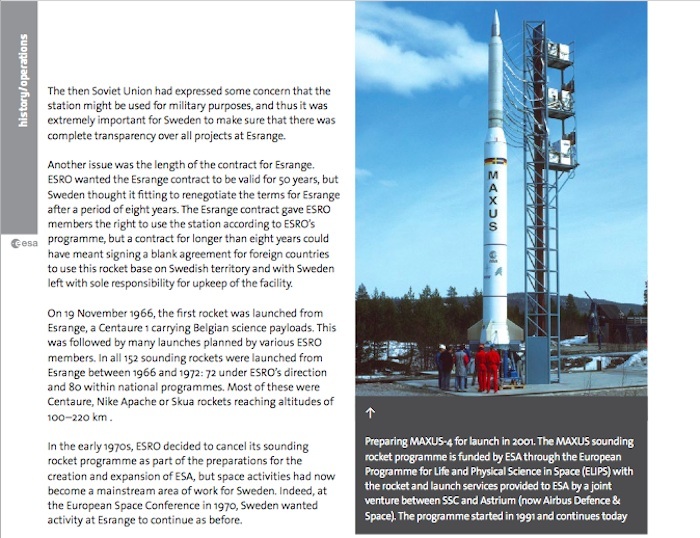 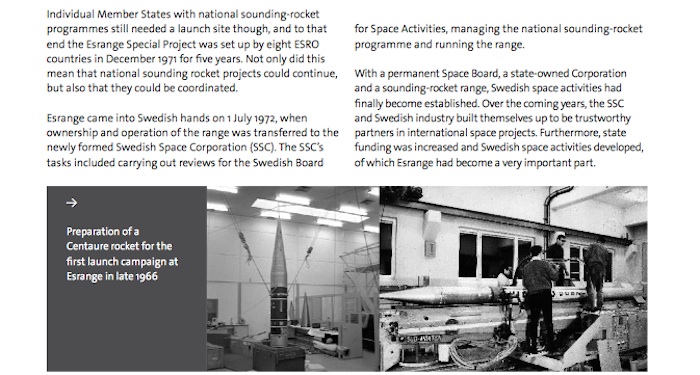 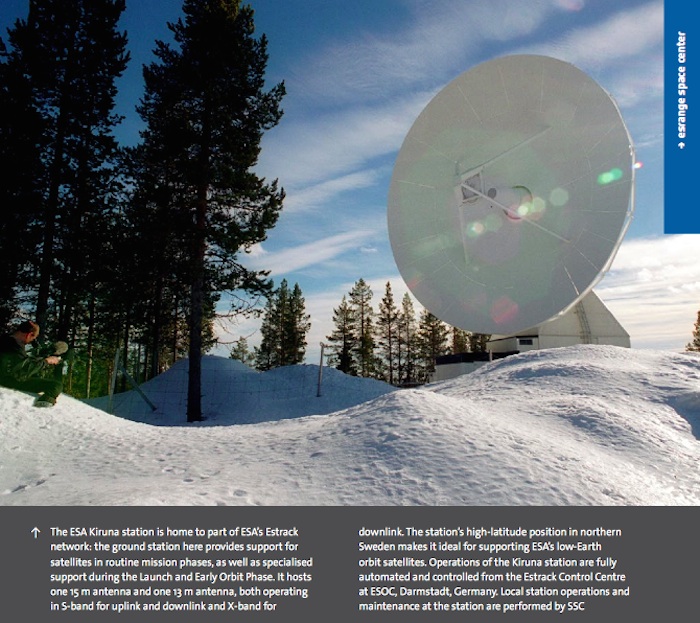