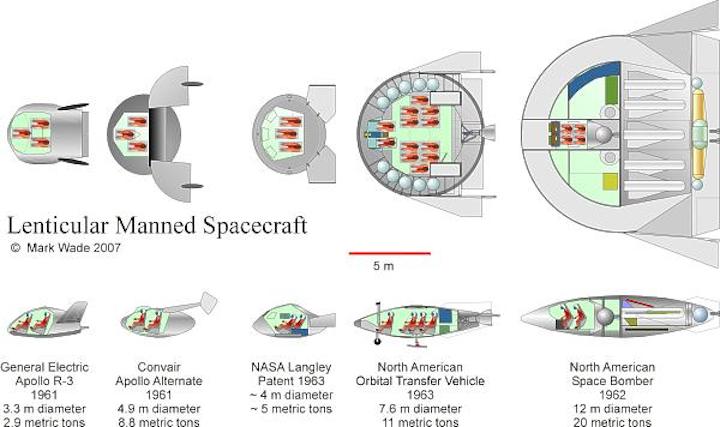 For a brief period in 1959-1964, NASA and the US Air Force actively considered launching manned flying saucers into space. Although very much in tune with UFO mania and science fiction films of the times, the concept lost out to other aerodynamic concepts.

Alan Kehlet was an aerodynamicist at NASA Langley. He played an important role in the NASA's Space Task Group New Projects Panel, which established the American space program for the 1960's. Kehlet first conceived of his lenticular manned spacecraft design in 1959. He was unsuccessful in getting the concept accepted for the Apollo program, although each bidder was asked to conduct an engineering analysis of a lenticular version of the spacecraft. Kehlet moved to North American Aviation in 1962, and the company proposed modified versions of Kehlet's vehicle for manned military and shuttle missions in the early 1960's.

Kehlet argued that a lenticular vehicle, as a manned spacecraft launched into orbit by a conventional booster, had clear advantages over ballistic, lifting body, and winged designs. At hypersonic re-entry speeds it would undergo lower heating and require less shielding. At the same time it was more maneuverable at subsonic speeds than a winged design, and could land at sea or on land without undercarriage. The symmetrical shape meant it would integrate easily into conventional booster designs, without creating excessive drag or asymmetric loads during ascent to orbit.

A saucer-shaped vehicle was inherently aerodynamically unstable and would require aerodynamic surfaces to allow controlled gliding flight. Kehlet advocated the use of deployable fins that would conform to the convex top of the saucer during most of the mission, and only be deployed when the spacecraft had slowed to below Mach 2 after reentry.

Of the Apollo bidders, Convair accepted Kehlet's design with little modification. General Electric believed it to have heating and stability problems, and proposed a modified version, a lifting body with only a whiff of the pure lenticular vehicle about it. In later North American studies, a permanently fixed square surface was mounted to the aft hemisphere of the saucer, providing aerodynamic control during re-entry as well. This increased the cross-range capability compared to the original design.

By the end of the1960's exhaustive aerodynamic tests converged on the X-33-type lifting body or the Space Shuttle-type cranked-delta winged vehicle. Lenticular concepts were not considered during the Shuttle design studies, and the opportunity to fly a real flying saucer passed into history.

Pye Wacket was the code name for a flying saucer-shaped air-to-air missile being developed by the US Air Force 1957-1961. A study of newly declassified sources reveals a more complex history... and the ultimate intention to develop Pye Wacket into a manned antisatellite spacecraft design... before it probably 'went black'.

It was 1957 and Eglin Air Force base, the US Air Force's center for development of airborne weaponry, was at work developing a Defensive Anti-Missile System for bombers faced with penetrating future Soviet air defenses. The United States felt surrounded by threats and saucers were literally "in the air". The area around Eglin experienced a rash of UFO sightings. 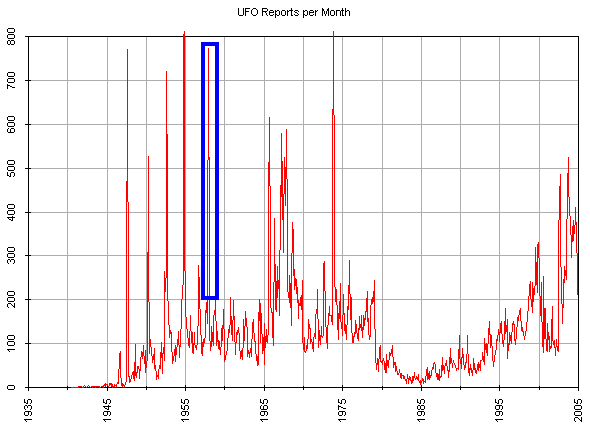 The Report on Unidentified Flying Objects by the former head of USAF Project Blue Book, presented the possibility that flying saucers were real hardware with incredible performance. At NACA Langley, Alan Kehlet was promoting his flying saucer design for manned spacecraft, and Paul Hill was developing a theory of flying saucer propulsion based on sighting reports.

In October the launch by the Soviet Union of Sputnik, the first artificial satellite of the earth, shook the American defense establishment to its core. Classified assessments of the time indicated that the B-52 bomber just shipping would only be able to penetrate the Soviet air defenses for a few years, and even the follow-on B-70 Mach 3 bomber might need some kind of active defense. The requirement was for an 'omnidirectional' device that after release from a bomber could fly in any direction to take out air-to-air or surface-to-air missiles and manned interceptors. It was in this milieu that the Eglin researchers conceived of a radical flying vehicle based on the classic flying saucer: a lens-shaped or 'lenticular' configuration.

The Air Proving Ground Center (APGC) at Eglin had the task of providing the guidance and control necessary to turn the lenticular device into a "defensive missile with omnidirectional launch capability". To ensure neutralization of any type of threat, Eglin advocated the use of a miniature nuclear warhead using an enhanced radiation warhead (then known as "neutron dudding"). This "dudding by neutron kill" approach would render the warhead of an interceptor missile inoperative without exploding it. RAND, the USAF's think tank, had concluded that an interceptor missile warhead fuze could not be designed that could withstand the dudding effect. They also believed that fractional-yield bomber defense missile warheads could be built with predictable blast and radiation effects.

In fact, miniature nuclear weapons that could be tailored to mainly emit certain types of radiation, and to channel that radiation directionally, were already on the drawing boards. Los Alamos physicist Theodore Taylor was the leading designer of tailored and miniaturized nuclear devices of this kind. The W54, first tested in 1957, had a diameter of 10.75 inches and weighed around 50 pounds (23 kg). Smaller devices using less fissile material and with channeled explosions were being developed for the Orion interplanetary spaceship. 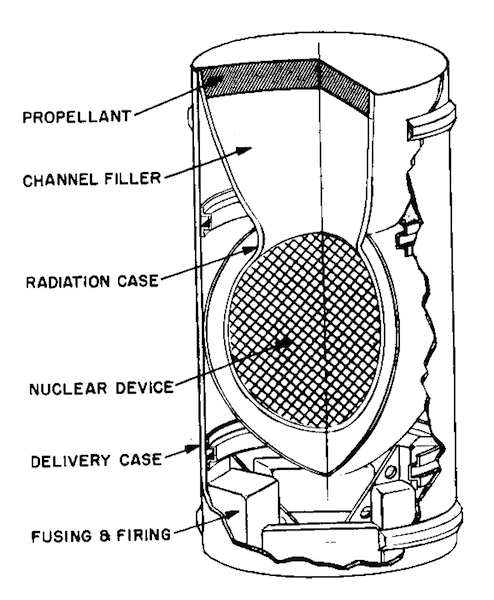 Eglin's Technical Planning Group first conducted an in-house preliminary study. Tests of the design were undertaken at Wind Tunnel E-l of the Gas Dynamics Facility, Arnold Engineering Development Center in Tennessee. These verified the preliminary aerodynamic calculations. Photos from this series of tests, released over fifty years later, were the first public evidence of the project. They show the first concept, the pure flying saucer shape, later dubbed Model I. 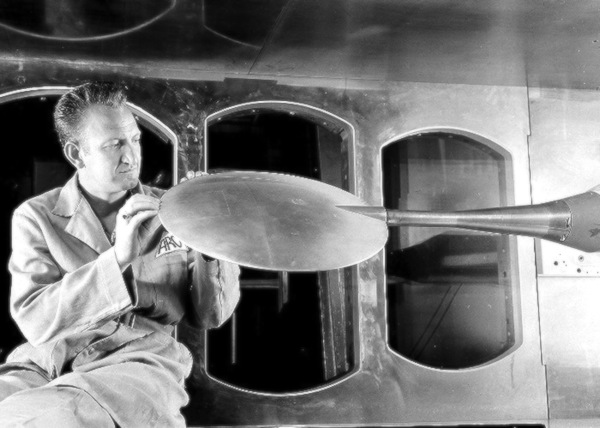 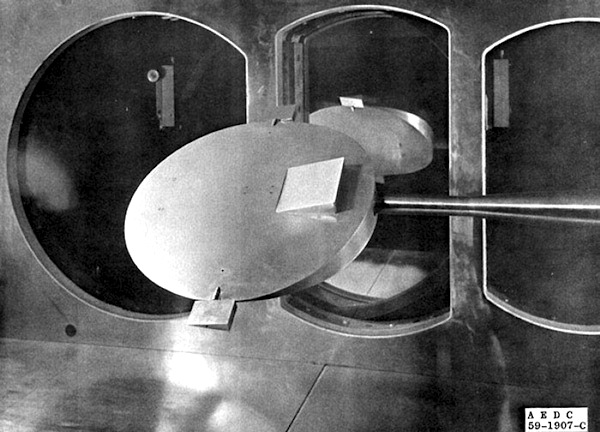 Leading edge deflection was proposed for maneuvering the missile in flight as a result of the "in house" test program. A unique launch method was proposed, with the saucers stacked like LP records on a spindle within the bomb bay, rotated to the proper heading, and then ejected from the spindle.

Part of the development contract for the B-70 Mach 3 bomber required North American to evaluate active defenses for the aircraft. The basic requirement for the aircraft was that it be fast enough, and fly high enough, so that Soviet air defenses would have no chance of destroying it. Therefore it was somewhat grudgingly that North American completed a B-70 Active Defense Feasibility Study in March 1959. Eglin's Model II "Lenticular Defense Missile" (LDM) was one of three devices reviewed.

At this point in the program North American was struggling to achieve specified range in the B-70 aircraft. Exotic 'zip' fuels might achieve the goal, but meanwhile every ounce on the aircraft mattered. So the contractor determined that carriage of five to eight defense missiles could provide a "sizable improvement in survival..." however only "...if the system could be installed with no range penalty" (!) Either of the conventional missiles would create a 675-nautical-mile range loss, and the LDM, 780 miles. North American then estimated that bomber defense missiles would only add about 10 percent to the B-70's penetration effectiveness. 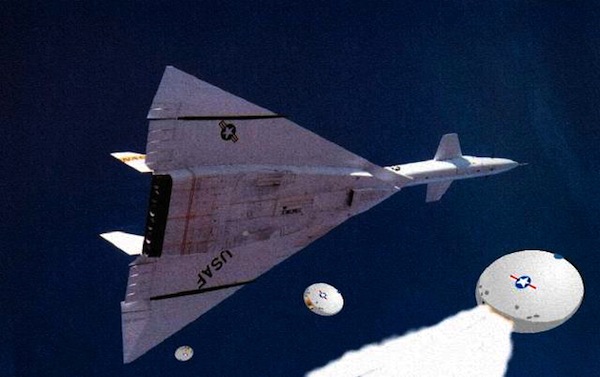 The study concluded that "...this improvement was too small ...to warrant...the addition of an active defense system at this time." However they also "...concluded that the threats against which an active defense mechanism would be required to operate were, in order of probability, a Mach 3 interceptor carrying a GAR-9 type missile, area-defense surface-to-air missiles, and point-defense surface-to-air missiles." In fact the Soviet Union demonstrated the last of these capabilities only a year later, when they shot down Gary Power's high-altitude U-2 spy plane. This vulnerability of the B-70 (absent active defense missiles) contributed to several budget cutbacks, and finally cancellation of the aircraft.

under certain conditions, performance capabilities which the more conventional missiles are hard put to equal. It can be launched in any direction since the drag is, in effect, the same no matter what its orientation is to the relative wind. While a conventional missile must be launched with its nose pointed forward and turned to attack a target in the rear hemisphere, the LDM Lenticular Defense Missile may be headed in the right direction at launch and all of its boost used to propel it toward the target.

The Eglin saucer concept considered by North American was 70 inches in diameter, nine inches deep, and was powered by two solid propellant rockets producing 10,200 pounds of thrust. An infrared tracking unit with a "jettisonable cover for initial phases of the flight . . . was installed in its nose." 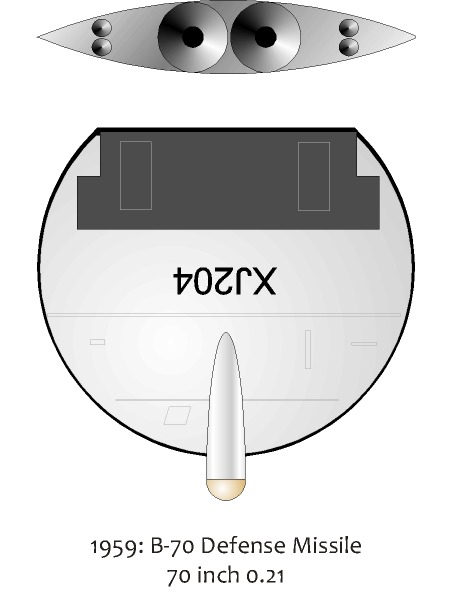 Range was approximately 72 nautical miles, weight was 510 pounds and maximum velocity 6,700 feet per second. Headed in the proper direction at launch, it would generally follow a pre-programmed inertial trajectory until burnout. During this phase the missile nose was not necessarily pointed at the target "since the best path is a function of the velocity vectors," but at burnout "spoilers" were to be "differentially actuated to turn the LDM so that the target will be within the cone of view of the IR seeker." At this point an aerodynamic cover/heat shield would jettison and the cylindrical section housing the hemispherical heat-seeker would deploy forward of the leading edge of the missile. The bomber's weapons control officer could alter the aspect of the seeker head by controlling a set of gimbals via datalink and retained, to this point, an overriding authority. Once the target had been acquired by infrared, the seeker head in the missile guided it autonomously to its target.

In addition, although North American was impressed with the "center post mounting and ejection method of the LDM," the company was concerned about the "very uniqueness" of the system and wanted "further detailed study." This launch system was described as follows:

At launch, the inner threaded post will rotate to translate the missile downward to the launch position, whereupon the entire shaft will rotate to turn the missile into the desired launch heading. The door will then open and the missile will be ejected by means of a percussion ejector. Rocket motors will not be ignited until the missile is safely clear of the aircraft.

The ejector piston will run the length of the center post with the breech at the top. A rotating, revolver-type magazine will contain all the charges needed to eject the full load of missiles and will revolve automatically for each shot.

Contoured about the missiles will be a fuel tank which will occupy any remaining usable volume. Capacity is estimated at 1500 gal.

The missile umbilicals will be routed through the center post. Since the outer portion of the post is used as a sliding guide to diametrically position the missiles, some leeway in shape is possible. Accordingly, a cavity will be formed in this outer shell to accommodate the umbilicals. Some twist will be necessary in the umbilical, but since maximum rotation of the missile to launch will be 180 degrees, the umbilical design problem is somewhat reduced.

North American to believe that "there may be sizable improvement in performance through development of this type of missile." The contractor held, however, that "insufficient results" at that time prevented establishment of a defined configuration and evaluation of "performance improvements which may be possible through alterations to the configuration tested." "Doubtful areas" were "stability, and drag versus angle of attack data."

Eglin did not share North American's negative assessment of the LDM, and continued work to clear up the uncertainties. Funding was obtained to move the concept into development. An unclassified request for proposal was circulated to industry on 23 March 1959, leading to several proposals being received in April. Convair Pomona received contract AF 08(635)-542 in June 1959 for a Phase I six-month Feasibility Study. Additional project phases would be exercised as contract options. Phase II would be design of a Feasibility Test Vehicle. Phase III would be the actual rocket-sled test of the FTV and design concepts for use of the design for spacecraft and ICBM applications. The classified ARDC Project 3811 was given the public code name Pye Wacket.