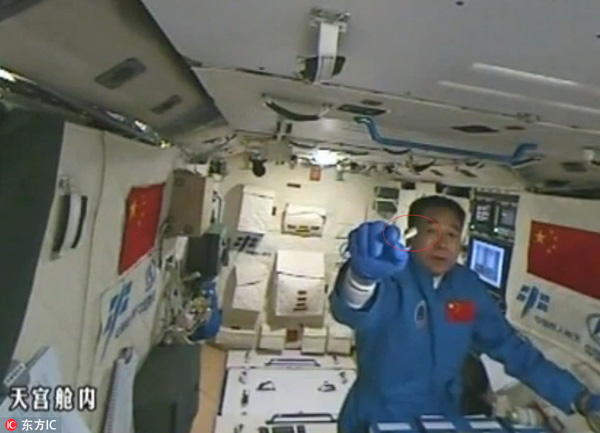 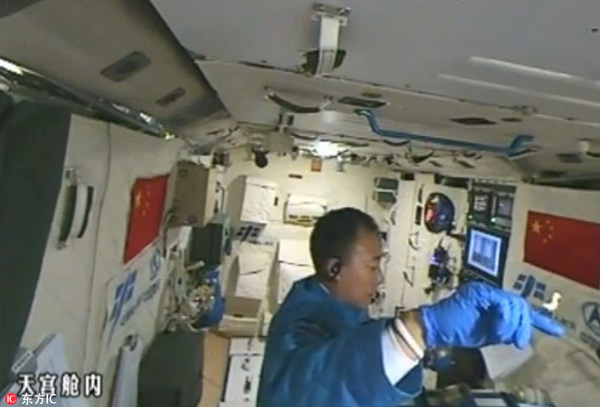 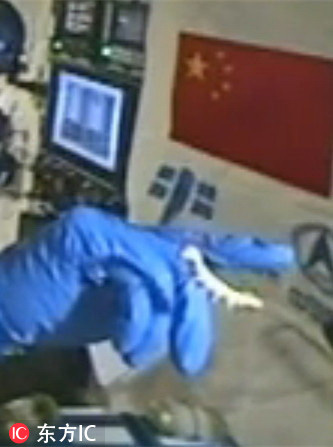 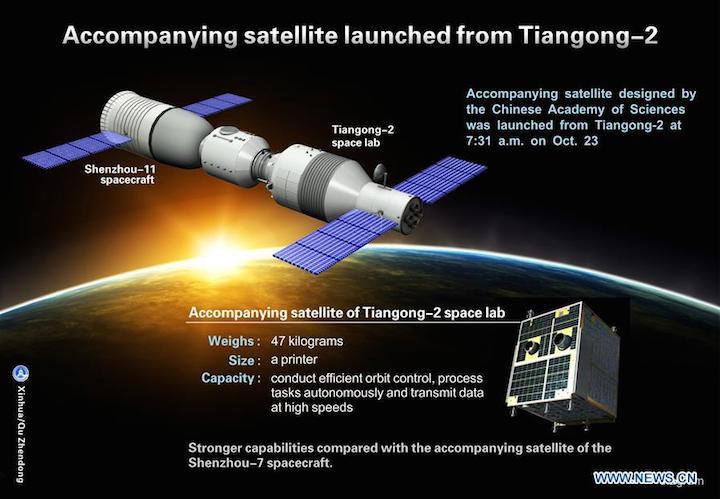 The graphics shows an accompanying satellite designed by the Chinese Academy of Sciences which was launched from space lab Tiangong-2 at 7:31 a.m. on Oct. 23, 2016. (Xinhua/Qu Zhendong)

The satellite, which weighs 47 kilograms and is the size of a printer, was launched into space aboard Tiangong-2 on Sept. 15, said the Technology and Engineering Center for Space Utilization under the Chinese Academy of Sciences.

The micro satellite is able to conduct efficient orbit control, process tasks autonomously and transmit data at high speeds, with stronger capabilities compared with the accompanying satellite of the Shenzhou-7 spacecraft, it said.

At the end of October, the satellite will orbit close to Tiangong-2 and Shenzhou-11 and take photos with the high-resolution camera installed on it.

The accompanying satellite will also carry out space experiments with Tiangong-2 to expand the use of space.

— China's latest astronauts to launch into space have landed on a series of stamps and related postal souvenirs celebrating their on-going mission.

Jing Haipeng and Chen Dong, who docked their Shenzhou 11 spacecraft to China's Tiangong-2 space lab on Tuesday (Oct. 18) beginning a month-long stay at the complex, are featured on the new postage stamps issued by the China National Philatelic Corporation, which is authorized by the China Post to sell stamp products to the public.

The stamps feature the portraits of Jing and Chen. A third issue depicts the crew's Shenzhou 11-Tiangong 2 missionpatch. There is also a dated pictorial cancellation mark that includes an image of the two spacecraft docked together.

The China National Philatelic Corporation is also offering stamped envelopes — "covers" as referred to by collectors — that are also adorned with photos of the taikonauts and a graphic design showing the launch of their Long March 2F rocket. The stamps and covers, which were first issued on Oct. 17, are offered individually or as sets presented in collectible folders. 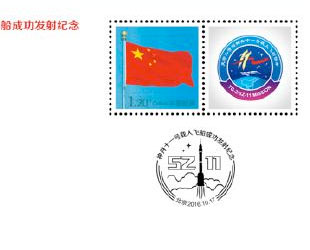 Jing, who turned 50 on board Tiangong-2 on Monday (Oct. 24), is the first Chinese astronaut to make three flights into space. As part of his current mission, Jing is filing journals for the state-run Xinhua news agency.

"This is my third time to fly into space," wrote Jing. "This is also my second time to enter a Tiangong. Tiangong-1 was quite good, but Tiangong-2 is much more comfortable. It is perfect in layout, decoration and matching of colors."

Shenzhou 11 is Chen's first spaceflight. He, too, is writing reports about his experience for Xinhua.

"Being in space for the first time is unusual," Chen wrote. "My big brother Jing Haipeng has really helped me adjust to life up here, and I am slowly getting used to the feeling of zero gravity, and, you know what — I'm starting to enjoy it more and more."

In addition to penning journals, the astronauts have also begun conducting an array of experiments on Tiangong-2, including working with a student-suggested study of live silkworms to see how the larvae react to the microgravity environment. 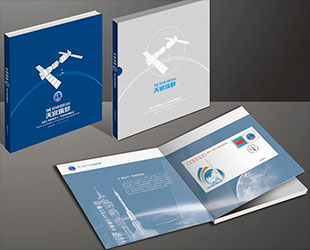 The orbiting laboratory, which is intended as a precursor to a Chinese modular space station, is also equipped with a cold atomic clock and a gamma ray burst study, the latter a joint project by Swiss, Polish and Chinese scientists.

Shenzhou 11 is not the first Chinese crewed mission to be honored on the country's stamps. Similar commemorative issues date back to China's first taikonaut in space, Yang Liwei, and his Shenzhou 5 mission in 2003.

China’s Tiangong 2 space lab has a paparazzi traveling alongside it, in the form of a picture-snapping satellite that’s the size of a desktop printer.

The satellite, Banxing 2, was released from the lab over the weekend and has already captured hundreds of images of Tiangong 2 with the Shenzhou 11 spacecraft docked to it.

Testing what’s been called an orbital “selfie stick” is one of the prime objectives of the 30-day Shenzhou mission currently being conducted by Chinese astronauts Jing Haipeng and Chen Dong.

Banxing 2, which builds upon earlier experiments with inspection satellites, will fly in formation and take pictures in visible and thermal infrared wavelengths to monitor the space lab’s condition.

The 100-pound (47-kilogram), solar-powered satellite is due to use its ammonia thruster system to back away as far as 300 miles (500 kilometers) and then approach again for a close-in inspection. Banxing 2 is also expected to take pictures of Earth and monitor orbital debris.

Jing and Chen are due to leave Tiangong 2 in their Shenzhou craft and return to Earth in mid-November, capping off China’s longest crewed space mission.

A square-shaped probe, dubbed "Little Bee" by Chinese scientists, is searching for gamma-ray bursts, the strongest explosions in the universe.

The formal name of the probe, set atop China's first space lab Tiangong-2, is POLAR (an abbreviation of Polarimetry of Gamma-ray Bursts). The device will help open a new window in the study of gamma-ray astronomy, says Zhang Shuangnan, principal investigator on the POLAR project and a chief scientist at the High Energy Physics Institute of the Chinese Academy of Sciences.

Tiangong-2 was launched in September, and the Shenzhou-11 spacecraft last week took two astronauts to a 30-day mission in the space lab. They will prepare for the construction of a more complicated space station, conducting more than a dozen scientific experiments, most of them in cutting-edge fields of exploration.

POLAR is the only international cooperation project on Tiangong-2, involving scientists from the University of Geneva, Paul Scherrer Institute in Switzerland and Poland's Institute of Nuclear Physics.

"The 30-kg device can be regarded as a telescope, but it is different from other telescopes, as it consists of 1,600 sensitive components to detect the polarization of gamma-ray bursts. They are like the 1,600 facets in the compound eyes of bees. That's why we call it 'Little Bee' ," says Zhang.

"We hope to obtain accurate polarization information of the gamma-ray bursts for the first time ever to better understand the process of how the violent explosions happen," Zhang says.

Gamma-ray bursts are extremely energetic explosions that have been observed in distant galaxies. They are the brightest electromagnetic events known to occur in the universe. Bursts can last from ten milliseconds to several hours.

The intense radiation of most observed gamma-ray bursts is believed to be released during a supernova or hypernova as a rapidly rotating, high-mass star collapses to form a neutron star, quark star, or black hole. A subclass of bursts appear to originate from a different process: the merger of binary neutron stars.

He estimates that "Little Bee" can detect about 100 gamma-ray bursts during its two-year operating period.

Zhang also wants to try something outside the plan. He and his team have succeeded in locating signals from the Crab Pulsar neutron star by analyzing the data sent back by POLAR.

"This is the first time a Chinese space astronomical instrument has been used to study the remaining pulsar left by the supernova explosion recorded by the ancient Chinese nearly 1,000 years ago," Zhang says.

China's Tiangong-2 space lab has six silkworms for experiments, and some of them have begun to spin cocoons one week after entering space.

The silkworms are nestled in a specially made box. The six were selected from 4000 silkworms specially cultivated by scientists.

The astronauts have been tending to them during down time, feeding them mulberry leaves. The experiment was designed by Hong Kong middle school students.

Once returned to earth, these cocoons will be compared with others for the way they've spun their cocoons and the quality of silk in a zero-gravity environment.