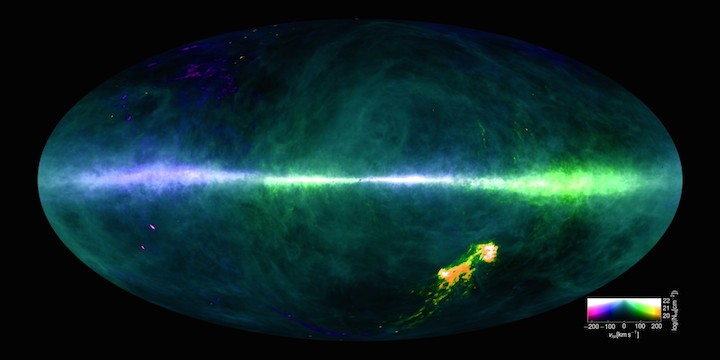 Scientists have created a detailed map of the Milky Way using two of the world’s largest fully steerable radio telescopes in Germany and Australia.

The research looked at neutral atomic hydrogen—the most abundant element in space and the main component of stars and galaxies—across the whole sky in a survey known as HI4PI.

“Radio ‘noise’ caused by mobile phones and broadcast stations pollute the faint emissions coming from stars and galaxies in the Universe,” he said.

“So sophisticated computer algorithms have to be developed to clean each individual data point of this unwanted human interference.

“Next to the thousands of observing hours an even larger amount of time has been spent creating the final scientific data product released today.”

It improves the previous neutral hydrogen study, the Leiden-Argentine-Bonn (LAB) survey, by a factor of two in sensitivity and a factor of four in angular resolution.

Professor Lister Staveley-Smith, from the International Centre for Radio Astronomy Research, said the study reveals fine details of structures between stars in the Milky Way for the first time.

“These structures had been smeared out by the coarse sampling of the sky in the LAB survey,” he said.

“Pilot studies of the HI4PI data show a wealth of filamentary structures never seen before.

“Tiny clouds become visible that appear to have fuelled star formation in the Milky Way for billions of years.

“These objects are too dim and too small to be detected even in the other galaxies closest to us.”
Dr Benjamin Winkel, from the Max Planck Institute for Radio Astronomy, said having a clearer picture of the hydrogen in the Milky Way would also help astronomers to explore galaxies even at cosmological distances.

“Like the clouds at the sky, all observations we receive from the distant Universe have to pass through hydrogen in our own Milky Way,” he said.

“The HI4PI data allows us to correct accurately for all these hydrogen clouds and clean the window we are watching through.”

The research has been published today in the journal Astronomy and Astrophysics.

HI4PI data will be freely available to scientists around the world through the Strasbourg astronomical data centre.

‘HI4PI: A full-sky Hi survey based on EBHIS and GASS’, published in the Astronomy and Astrophysics Journal October 20th, 2016.

The name ‘HI4PI’ is drawn from the fact that this study measures radio wavelength radiation emitted from neutral atomic hydrogen atoms (HI) across the entire sky. Observing in all directions for an ‘all-sky’ survey in this way creates a sphere of data, and because the solid angle (a two-dimensional analogue of an angle) of a sphere is equal to 4π ’steradians’ (or square radians), we chose the name HI4PI for this work.

The Argelander Institut fuer Astronomy (AIfA) is an academic, research and educational institute and a part of the Department of Physics and Astronomy at the University of Bonn, Germany. The institute conducts cutting-edge research over a broad range of theoretical and observational topics from stars to cosmology.

The Max-Planck-Institut fuer Radioastronomie main area of research is radio astronomy but the activities of the institute encompass the whole area of astronomical observations throughout the electromagnetic spectrum.