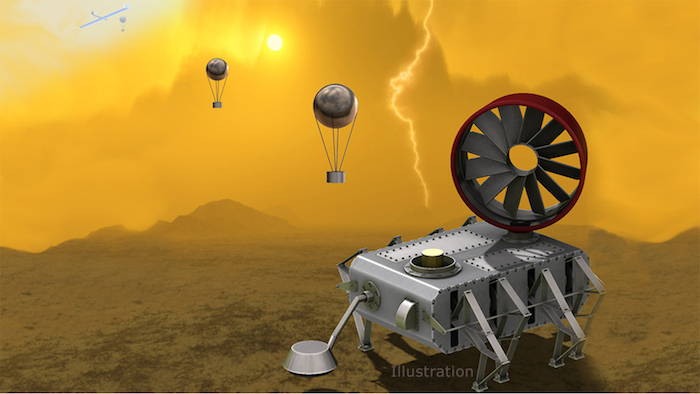 Each year, NASA funds a handful of futuristic concepts to push forward the boundaries of space exploration. These early-stage proposals are selected with the hope of developing new ideas into realistic proofs-of-concept. From Aug. 23 to 25, the NASA Innovative Advanced Concepts (NIAC) symposium will host presentations on 28 proposals, including five from NASA's Jet Propulsion Laboratory, Pasadena, California.

The 2016 NIAC Symposium will also be carried live via LiveStream at:

Most of JPL's proposals are Phase I concepts, which means they are little more than ideas right now. Their creators will have to deliver reports explaining each project's technical challenges in order to advance them to Phase II of funding. If they advance to Phase II, they would be awarded up to $500,000 for a two-year study to further develop the project.

"The NIAC program is designed to let technologists stretch and create concepts that have never been considered by NASA before," said Jason Derleth, NIAC program executive for NASA's Space Technology Mission Directorate. "Each proposal is still required to be based on solid scientific and engineering principles and to advance NASA's mission objectives."

These JPL proposals will be at the symposium:

A Solar Oasis in Lunar Craters

The advantage of solar power is its unlimited supply: the sun provides plenty of warmth and energy so long as you can access its rays. But what if a mission is to explore a permanently shaded lunar crater surrounded by tall mountain peaks? Or to venture into a cave, which could contain water ice and be habitable if not for the darkness and low temperatures?

Adrian Stoica of JPL led a concept that has successfully advanced to Phase II: building mirrored "TransFormers," a new class of shape-changing robotic structures that unfold like origami and reflect solar energy wherever you need it. Phase I examined whether such a structure could power a single rover as it explores a crater. Phase II is more ambitious in scope: whether an entire solar infrastructure could create a "solar oasis" hosting fleets of rovers, equipment and even humans.

The Phase II proposal examines how to provide power and warmth for lunar bases, even colonies, which could support humans and robotic workers alike. TransFormers are projected to be more affordable and easier to transport than radioisotope thermoelectric generators (RTGs) like the one that powers NASA's Mars Science Laboratory. TransFormers could potentially allow a wider range of robots and equipment to function in crater sites, where they could extract water used to make fuel for affordable travels to Mars and beyond.

Art-inspired automata could reveal the interior of Venus

Venus' forbidding atmosphere has claimed numerous landers over the years. With temperatures of more than 842 degrees Fahrenheit (450 degrees Celsius), sulfuric acid clouds and crushing surface pressures, electronics won't last longer than a few hours in all but the most robust spacecraft.

Jonathan Sauder of JPL thinks the solution may be getting rid of the electronics altogether. Inspired by mechanical automata  - including spider-like "Strandbeest" created by artist Theo Jansen -- Sauder's NIAC proposal is AREE, or Automaton Rover for Extreme Environments.

AREE's legs and science instruments would be controlled by a fully mechanical computer and powered by a wind turbine. Temperature, wind speed and seismic measurements could be "broadcast" by a rising and falling radar reflector "piston": the piston's up or down position could be read as Morse code by a radar tracker orbiting the planet. The orbiter would then relay the readings to Earth.

Masahiro Ono's concept: a robot could enter the subsurface oceans of a moon like Enceladus by rappelling into a cryovolcano. Image Credit: Masahiro Ono/NASA/JPL-Caltech

Journey to the center of an icy moon

Europa and Enceladus are fascinating subjects for a future planetary mission because of their potential for subsurface, habitable oceans. The question is how to break through each moon's icy crust and pilot a craft down below.

Masahiro Ono of JPL wants to borrow a page from Jules Verne. In "Journey to the Center of the Earth," the characters venture into a volcano to explore the planet's inner world. Ono's proposal, the Icy-moon Cryovolcano Explorer (ICE), would include setting a lander down next to a cryovolcano, a vent that erupts with water vapor and small particles. A robot could then crawl to the edge and be lowered in by cable, like a rappelling alpinist.

The robot could analyze the inside of the vent and send science back to the lander, which would then relay its findings to Earth. The robot could eventually descend all the way to the subsurface ocean. There, it would release an autonomous underwater vehicle for further exploration.

There's intense interest in studying asteroids, but the challenge is getting near them. There isn't enough gravity or atmosphere to allow a spacecraft to touch down without ricocheting off the surface.

But why land when you can glide? JPLer Marco Quadrelli's Electrostatic Glider (E-Glider) was inspired by the idea of dust fountains visible on our moon's surface: when warmed by the sun, these dust particles gain an electrostatic charge. The same principle turns every asteroid or comet's dust into a weak but usable power supply.

Quadrelli's glider would be a low-cost craft attached to foil-like streamers. These streamers would inflate and lift based on the electrostatic energy around them. The glider could then be steered around an asteroid and perform basic science readings on its composition.

A Battery Recharger in the Skies of Venus

Another challenge of sending a craft to Venus is how to extend its power supply. Batteries will only last a few hours, and the thick Venusian atmosphere weakens the efficiency of solar power.

Ratnakumar Bugga of JPL has proposed a weather balloon powered by chemical batteries. The Venus Interior Probe Using In-Situ Power and Propulsion (VIP-INSPR)would use electrolysis to generate hydrogen from the thick Venus atmosphere. It could then store that power as chemical hydride in its fuel cells.

This battery system could effectively have an unlimited power supply, recharging as it lowered itself into the Venusian atmosphere to perform science readings.