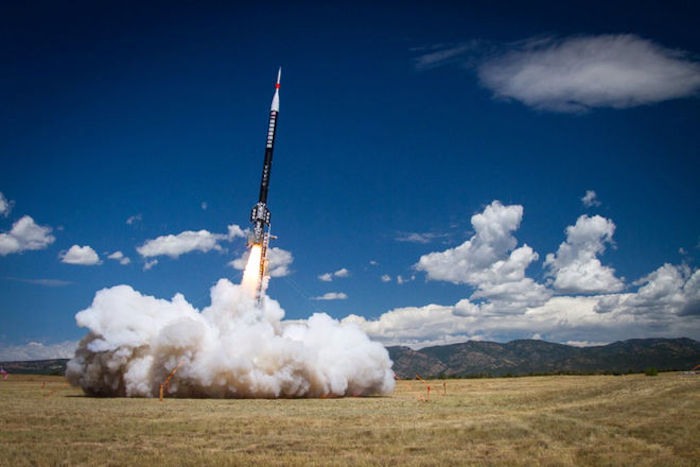 The Future Heavy sport rocket, built by interns and mentors from United Launch Alliance, is the "largest sport rocket launched in the world" according to the company.
Credit: ULA
-
Interns working for the private spaceflight company United Launch Alliance clearly aren't making copies and fetching coffee — they're building record-breaking rockets.
On Sunday (July 24), ULA launched the 50-foot-tall (15.24 meters) Future Heavy rocket out of Fort Carson Army Post, breaking the record for "the largest sport rocket launched anywhere in the world," according to a statement from ULA. The Future Heavy is also notable because it was built entirely by company interns and their mentors.
"We like [our interns] to have a very realistic experience," ULA President and CEO Tory Bruno told Space.com at the Space Symposium meeting in Colorado Springs, Colorado, last April.
ULA launched two intern-built rockets on Sunday: the Future Heavy and the 10-foot-tall (3 m) Genesis rocket. The Future Heavy was set to launch at approximately 11 a.m. MDT (1 p.m. EDT), and the first post-launch images appeared on ULA's Twitter account at 1:27 p.m. EDT (1727 GMT). Twitter user Andrea Lehnhoff (@AndieMarieC) tweeted a video of the launch. The Genesis launch was briefly delayed due to a "tech issue," but ULA later reported mission success. (The day's events also included launches sponsored by the Space Foundation, the statement said).
. 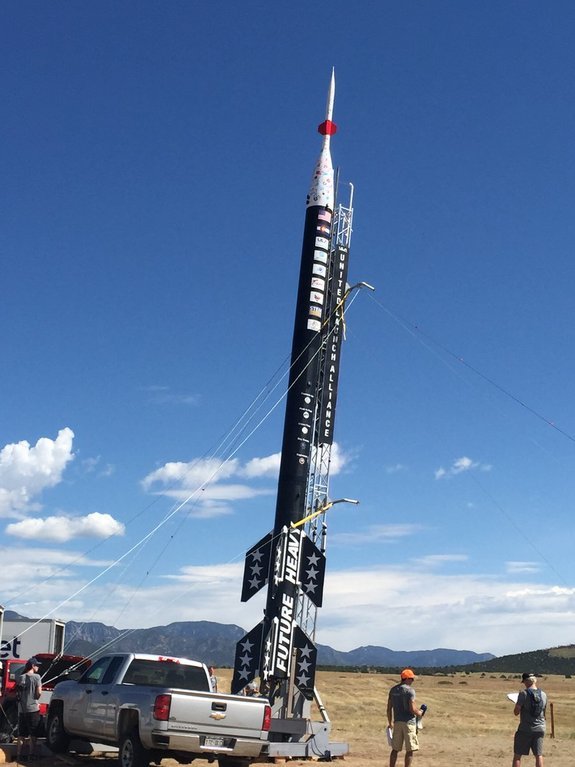 The ULA Future Heavy rocket was built by company interns and their mentors.
Credit: ULA
-
The Future Heavy, which is defined as a sport rocket (built for recreation, rather than professional purposes), carried four large payloads designed by interns at Ball Aerospace, according to the statement; it also carried 15 small scientific payloads designed by students from nearby K-12 schools and community groups. The rocket's apogee is about 10,000 feet (about 3,000 m) above the ground, members of the internship program told Space.com at the Space Symposium meeting.
For the past five years, interns were given the option to work on the Future Heavy rocket as a side project (outside of normal working hours). Approximately 300 people "had a hand in" building the rocket, according to ULA, while 68 interns and 22 mentors from ULA as well as 37 interns and 19 mentors from Ball Aerospace participated this year. Interns at multiple ULA facilities were able to contribute to the project, Bruno told Space.com.
United Launch Alliance is a joint venture of the aerospace companies Boeing and Lockheed Martin. ULA has completed over 100 consecutive successful launches since its formation in 2006. The company produces the Atlas V and Delta IV rockets, among others.
Bruno expanded the internship program at ULA when he joined the company, he told Space.com, and the program is set to grow even larger in the near future.
"Internships are a great way to catch a student when they're still being educated and say, 'You know, all this hard work in engineering and science is worthwhile because this is what the industry is going to be like, what your life could be like when you come out,'" he said.
Quelle: SC
Raumfahrt
« Zum vorherigen Eintrag Zum nächsten Eintrag »
2187 Views
Created with page4