Some of the nation's greatest advances in aviation have been staged at Hugh L. Dryden Flight Research Center. It is the home of aircraft that
push the envelope of aerodynamic theory, along with research pilot skill, nerve, and courage.
Dryden is located at Edwards, California, in the Mojave Desert, some 80 miles north of Los Angeles. Enjoying nearly perfect weather for flight research, this NASA facility sits at the southern end of a 260-mile high-altitude high-speed supersoniccorridor (there are three high-speed corridors altogether). Situated adjacent to Rogers Dry Lake, a 44-square mile natural surface for landing, Dryden is in an isolated area free of population density.
Dryden has data catalogued from years of flying experimental aircraft, such as the Bell X-1-the first aircraft to break the sound barrier on October 14, 1947. The X-1 program provided the National Advisory Committee for Aeronautics (NACA), NASA's predeces- sor, an ability to master the effects of transonic speeds and the stability and control of aircraft flying in that regime.
Since the late 1940s, Dryden has acquired a unique and highly specialized capability for conducting flight research programs. Its research organization, consisting of pilots, engineers, technicians and mechanics is unmatched anywhere in the world.
The open skies, land and resources at Dryden proved their usefulness to the space effort in a large way. The Mach-6 X-15 program researched and developed various technologies that were implemented in the U.S. Mercury, Gemini and Apollo spacecraft. The X- 15 provided the pioneeringwork needed to design a craft to go into space, then return to a horizontal landing on Earth. Along with the X-15, lifting body research done at Dryden in the 1960s helped pave the way for today's Space Shuttle.
. 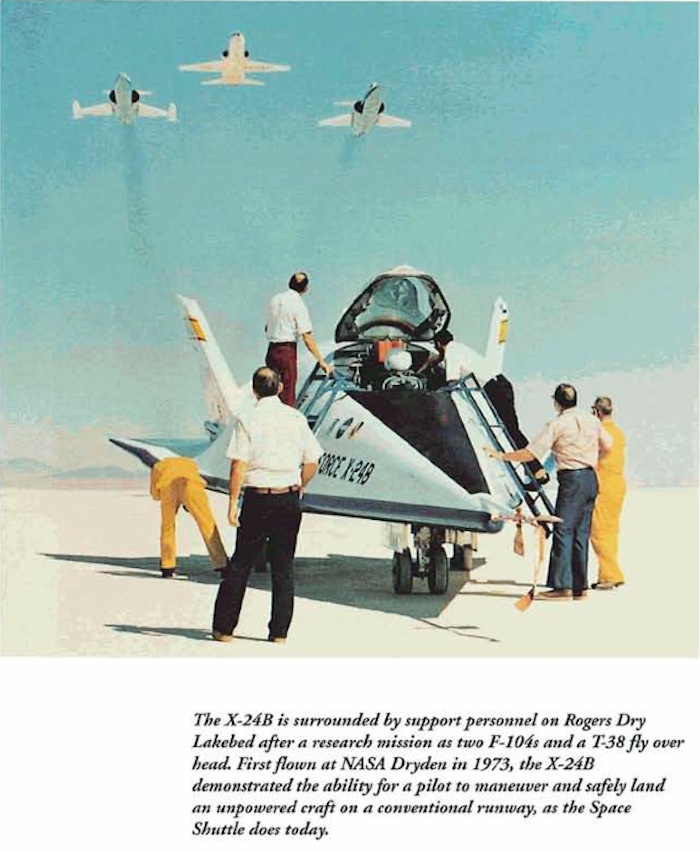 In September 1996, Dryden celebrated its 50th anniversary of contributing to the nation's aerospace capabilities. This expertisewas clearly in evidence in 1973 as the first flight of the X-24B took place. The X- 24B was successor to the wingless lifting bodies that were flown in a joint USAF-NASA research program to demonstrate a pilot's ability to maneuver and safely land a vehicle with a shape designed for reentry from space flight.
Like its wingless lifting body predecessors-the
M-2, HL-10 and the X-24A that had flown at Dryden-the X-24B made use of a B-52 for air launch above the dry lake bed. Released at 40,000 feet, the X- 24B glided to a desert touchdown a scant four minutes later. Flown from August 1973 to November 1975, the X-24B proved invaluable in shaping the Space Shuttle program.
An F-8 Crusader first flown at Dryden in 1972 inaugurated in 1973 the first tests of Digital Fly-By- Wire (DFBW), a concept that utilizes an electronic flight control system coupled with a digital computer. The research aircraft tested DFBW as a replacement for conventional mechanical flight controls. Well over 200 flights of the F-8 Crusader were carried out in a DFBW program that lasted 13years-considered one of the most significant and successfd aeronautical programs in NASA history. Fly-by-wire flight control technology, made possible in large measure by the F-8 Crusader tests, was later applied in creating the Space Shuttle flight control system.
The center's primary study tools are research aircraft. But ground based facilities play a significant role in Dryden research. These key facilities include a high temperature and loads calibration laboratory to test complete aircraft and structural components under the combined effects of loads and heat, a highly developed aircraft flight instrumentation capability and a flight systems laboratory with a diversified capability for avionics system development.
Other assets of Dryden include a flow visualization facility that permits examinations of how air courses around test models or small components, a data analysis facility for processing of flight research data and a remotely piloted research vehicles facility.
Dryden participated in the five free-flight Approach and Landing Tests of the Space Shuttle Enterprise staged in 1977 and continues to support Shuttle orbiter landings if diverted by bad weather from the Kennedy Space Center in Florida. If a shuttle does land in California, the vehicle is then ferried back to the launch site atop a 747 aircraft.
- 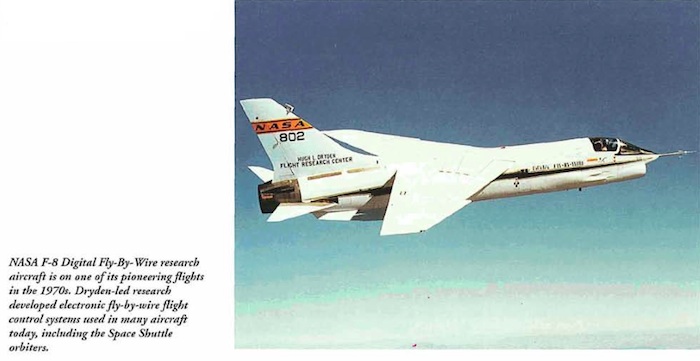 Clearly in evidence at Dryden is the match of the center's past prestige with the necessary technical competence to tackle the aeronautical challenges of the day. In this regard is the speciallyinstrumented FIA-18, used to investigatehigh angle of attack, or high alpha, flight. Today's high performance jet aircraft can fly in the high alpha flight regime, but not necessarily efficiently.The center's research created a data base for aircraft designers to accurately predict high alpha airflow aircraft control and performance. High alpha technology may result in better control and maneuverability and enhanced safety in future high performance aircraft.
Another high alpha program at Dryden featured the thrust-vectored X-31. An international test organization managed by the Advanced Research Projects Agency (ARPA) conducted flight tests to obtain data for next generation high performance aircraft. In addition to NASA and ARPA, program participants included the U.S. Navy, U.S. Air Force, Rockwell Aerospace, Deutsche Aerospace, and the Federal Republic of Germany.
In 1993 and 1995, a Propulsion Controlled Aircraft (PCA) system underwent successful tests at Dryden. A PCA system provides a pilot with a computerized system to land an aircraft with only engine controls in the event of a catastrophichydraulic system failure. Once consid- ered an impossible feat by many engineers, automatic PCA landings of two McDonnell Douglas aircraft, an F- 15 fighter and an MD-11 airliner, were accomplished.
The EnvironmentalResearch Aircraft and Sensor Technology program at Dryden is attempting to develop remotely controlled aircraft capable of sustained, slow flight at high altitudes to gather currently unavailable information about our atmosphere. For example, Pathfinder is a solar-powered, ultra light research aircraft developed by AeroVironment Corporation. The vehicle will test very high-altitude and extremely long-duration flight for periods of up to several weeks or months. Key areas of development include solar cell, battery and electric motor technology; flight operations techniques and procedures; structures; flight environment simulation; and science mission demonstration.
For the past half century, Dryden Flight Research Center has been at the forefront of flight research; a place where people can be engaged in examining and resolving the great aeronautical and astronautical challenges of our time. By pushing the experimental envelope, be it speed, altitude, control, or other bound- aries, Dryden research has strengthened the U.S. position as a world-class leader in aeronautics.
Quelle: Aerospace Research and Development / NASA
Luftfahrt
« Zum vorherigen Eintrag Zum nächsten Eintrag »
2611 Views
Created with page4