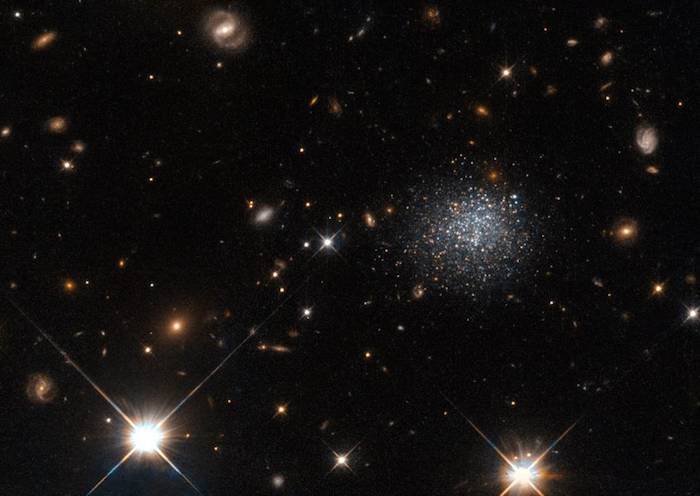 The fuzzy collection of stars seen in this NASA/ESA Hubble Space Telescope image forms an intriguing dwarf galaxy named LEDA 677373, located about 14 million light-years away from us.
Dwarf galaxies are small, faint collections of stars and gas. Their diverse properties make them intriguing objects to astronomers, but their small size means that we can only explore those that lie closest to us, within the Local Group, such as LEDA 677373.
This particular dwarf galaxy contains a plentiful reservoir of gas from which it could form stars. However, it stubbornly refuses to do so. In a bid to find out why, Hubble imaged the galaxy’s individual stars at different wavelengths, a method that allows astronomers to figure out a star’s age. These observations showed that the galaxy has been around for at least six billion years — plenty of time to form more stars. So why has it not done so?
Rather than being stubborn, LEDA 677373 seems to have been the unfortunate victim of a cosmic crime. A nearby giant spiral galaxy, Messier 83, seems to be stealing gas from the dwarf galaxy, stopping new stars from being born.
Quelle: NASA
Astronomie
« Zum vorherigen Eintrag Zum nächsten Eintrag »
2203 Views
Created with page4