RED SPRITES AND GREEN AIRGLOW: Thunderstorm season is underway in the northern hemisphere. That means astrophotographers should point their cameras above the clouds. Thomas Ashcraft did so on June 14th, and he captured two forms of space weather--red sprites and green airglow: 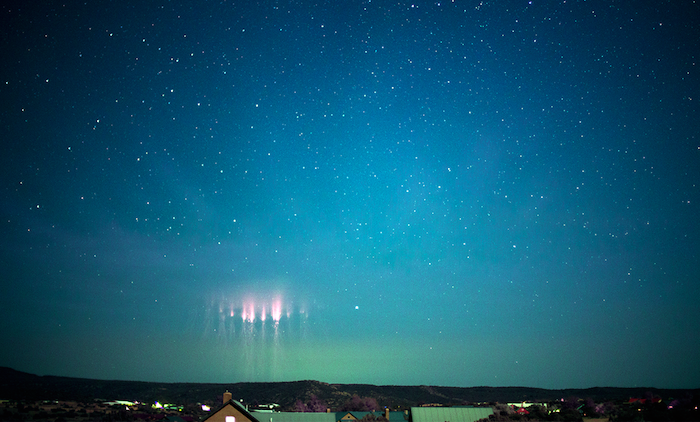 "A large jellyfish sprite appeared over a thunderstorm in the western Oklahoma panhandle last evening," says Ashcraft. "It was about three hundred miles away from my observatory."
"I also caught it in video with very low frequency (VLF) radio emissions, and the parent lightning stroke made a strong pop," he says. Turn up the volume and play the video.
Possibly triggered by cosmic rays, sprites are a form of upper atmospheric that reach up from the tops of thunderstorms toward the edge of space. Although sprites have been seen for at least a century, most scientists did not believe they existed until after 1989 when sprites were photographed by cameras onboard the space shuttle.
The "jellyfish sprite" Ashcraft captured is backlit by a band of green airglow. Airglow surrounds our entire planet, fringing the top of the atmosphere with aurora-like color. Although airglow resembles the aurora borealis, its underlying physics is different. Airglow is caused by an assortment of chemical reactions in the upper atmosphere. Auroras, on the other hand, are ignited by gusts of solar wind.
Quelle: Spaceweather
Astronomie
2106 Views
Created with page4