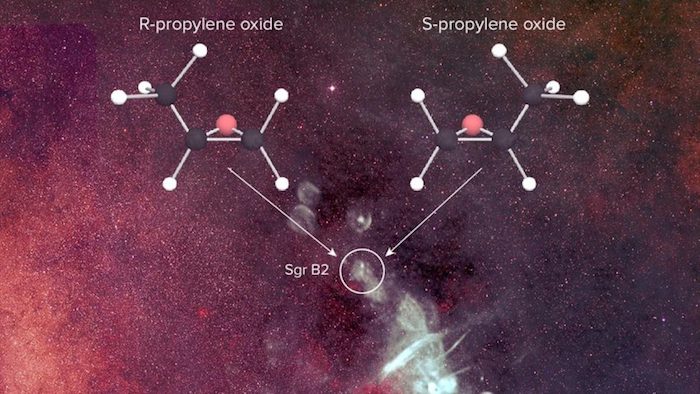 The chiral molecule propylene oxide (its two mirror image forms shown) is the first such “handed” substance to be detected in deep space.

A new find in deep space may explain one of the biggest mysteries here on Earth. Researchers have spotted the first evidence of a chiral molecule—a molecule with two mirror image “twins”—in interstellar space. The molecule, used on modern-day Earth to make polyethylene plastics, was found in a gas cloud about 28,000 light-years away from our planet. And though it isn’t directly involved in biochemical reactions, it may shed light on how the chiral molecules that ultimately led to life on Earth formed in the first place.
Molecules, especially large and complicated ones, can come in mirror image forms even when they have the same chemical formula. These forms, often termed “left-handed” and “right-handed,” behave the same way physically in terms of melting, freezing, and absorbing light. But they can react chemically with other substances in dramatically different ways, with one form combining readily and the other reacting slowly, if at all. For instance, while one form of some pharmaceutical compounds serves a useful purpose, their mirror images aren’t recognized by the body—and in some cases can even be harmful.
All the amino acids found in living creatures—the building blocks of proteins—are left-handed. Some scientists believe the trait is leftover from the soup of prebiotic molecules delivered to our planet from space by asteroids and comets in Earth’s early years. When life got started, the left-handed amino acids incorporated into the first living cells and became the gold standard for all subsequent life, according to the prevailing notion. This rendered right-handed forms useless because they didn’t participate in biochemical reactions. Studies of some meteorites have revealed that they contain both forms of various chiral molecules, but that left-handed forms typically are found in larger concentrations—an oddity that can’t yet be fully explained.
No one has ever before spotted a chiral molecule in interstellar space, says Brett McGuire, an astrochemist at the California Institute of Technology (Caltech) in Pasadena. But when he and his colleagues sorted through data gathered by radio telescopes, they spotted signs of one called propylene oxide (CH3CHCH2O) in a large cloud of gas near the center of the Milky Way. The signs included three particular wavelengths of radiation that had been absorbed by the substance as they passed through the cloud.
The cloud, called Sagittarius B2 North, lies about 28,000 light-years away near the center of the Milky Way. It’s a little more than 3 light-years across and contains enough gas to make about 250,000 stars the size of our sun. Radio telescope data suggest that the propylene oxide is found in a shell of gas far outside that core, most likely at a temperature of about 5 K (–268°C). That fits well with estimates made from other teams’ observations of other gases in the same cloud, says Brandon Carroll, also an astrochemist at Caltech and co-author of the new study. The team’s observations are reported online today in Science and are also being presented today at a meeting of the American Astronomical Society in San Diego, California.
The finding bolsters the notion that complicated molecules can form on ice grains in diffuse clouds of interstellar gas and dust, as many models of evolving solar systems suggest. However, the team’s observations don’t include any information about which forms of propylene oxide—right-handed, left-handed, or both—exist in the distant gas cloud. Future studies, such as those that look at particular forms of polarized light that have passed through the cloud, may be able to discern whether there’s an imbalance between the left-handed and right-handed forms. That, in turn, would help scientists understand whether imbalances in the proportions of molecule handedness arise while the molecules are forming in space or later, during the evolution of life.
A variety of substances, including simple carbon-bearing molecules thought to be important precursors for life, have been spotted in interstellar space around nearby stars. But the team’s new finding of a chiral molecule “offer[s] another step of complexity” that suggests that other such substances, including prebiotic molecules, can form in interstellar space, possibly on the surfaces of small grains of ice, says Tom Millar, an astrochemist at Queen’s University Belfast in the United Kingdom, who was not involved in the work. The findings also open up challenges for other teams to further study how life’s earliest ingredients might have formed, he notes.
Quelle: Science AAAS
Astronomie
2054 Views
Created with page4