The mystery of the initial mass function solved
A method used to study Facebook, proteins and power grids successfully applied to stars 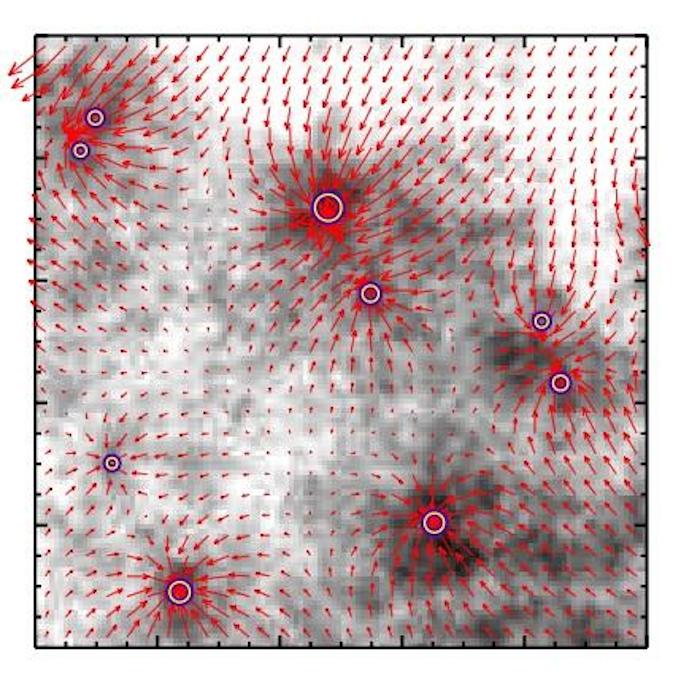 A model of the interstellar medium having a fractal density distribution. Dense cores where proto-stars are forming are marked and gravitational forces generated by them are shown.
.
For the first time, scientists used methods of network science to solve a fundamental astrophysical problem -- explaining the so-called "initial mass function", a distribution of stars by mass in galaxies and starclusters. The study has been published in the recent issue of The Astrophysical Journal: http://dx.doi.org/10.3847/0004-637X/824/1/17
Andrei Klishin (an MIT graduate of 2015, currently a graduate student at the University of Michigan) under the supervision of Igor Chilingarian (researcher at Sternberg Astronomical Institute, Moscow State University and Smithsonian Astrophysical Observatory) applied methods of network science to solve a fundamental astronomical problem standing for 60 years, the origin of the Stellar Initial Mass Function. "Such methods have been used across different research fields, from sociology and information science to molecular biology, but never before in astrophysics", Igor Chilingarian says.
The Stellar Initial Mass Function is a function that describes relative fractions of stars having different masses in a stellar system or a ratio of big and small stars in galaxies. In 1955, the theoretical physicist and astrophysicist Edwin Salpeter was the first to derive this distribution law empirically in the Solar neighborhood using star counts (presently known as the "Salpeter initial mass function"). He demonstrated that the distribution of stars by mass has the shape of a power law with exponent of -2.35, i.e. the stars 10 times massive than our Sun are 102.35 = 220 times less frequent than Solar type stars.
The knowledge of how exactly stars in a galaxy or a star cluster are distributed by mass is crucially important for astronomers. A stellar system is like a big family where all members interact with each other. They delineate the "living space" in a certain way and react to external influence according to the same physical laws. In order to better understand, how members of that "family" affect each other's evolution, astronomers need to know what types of stars the "family" consists of -- i.e. to have the data of how many stars of each mass are there in the system.
Igor Chilingarian and Andrei Klishin described a system of proto-stars which evolve by absorbing gas from the diffuse interstellar medium as a spatial network growing by the principle of the preferential attachment: a node having many links creates new links even faster. In the interstellar medium, links are gravitational forces acting between molecular dense cores that will later form stars. "We demonstrated that a power law that the stellar initial mass function follows is formed independently of the initial mass distribution of proto-stars if the density distribution in the interstellar cloud is fractal. This fractal distribution directly follows from the classical theory of turbulence developed by the Soviet mathematician Andrey Kolmogorov. We encounter fractal, or self-similar objects on a daily basis. Among others, clouds in Earth's atmosphere, snowflakes and even some fruits and vegetables such as cauliflower or broccoli all have fractal properties", comments Igor Chilingarian.
In the framework of this simple model, the scientists succeeded to theoretically explain the stellar initial mass function shapein just eight equations,which did not invoke any unjustified assumptions or extra free parameters required my many existing star formation theories. Igor Chilingarian emphasizes that all existing initial mass function theorieswere developed using "a classical astrophysical approach" and presented in long articles featuring dozens of pages of calculations and hundreds of formulae.
"Igor invited me to work on this project after we met in Boston when I mentioned my interests in statistical physics", Andrei Klishin says. "This area of physics deals with the aspects of systems of large number of particles where particular details regarding individual particles become unimportant. We know, that the same Salpeter power law exponent of -2.35 was measured in many star clusters of different ages, metallicities and total masses. This suggests that the value is determined not by some local properties of a specific cluster, but rather by some more general principle. That's why when we introduce the principle of preferential attachment in our paper, we refer to works in network science, bibliometrics, biological speciation. In all those very different systems the statistical properties turn out to be very similar."
Network science is a modern area of research actively developed over the last 15-20 years. As suggested by its name, it studies properties of networks as mathematical objects, regardless of the specific system interpreted as a network. Network theory can be used to describe the power grid as a set of power plants, loads and transmission lines; interaction of a multitude of proteins in a living organism, connections of users in a social network such as Facebook or even the whole World Wide Web, or communication in scientific collaborations. Igor Chilingarian and Andrei Klishin were the first to apply network science methods to solve a fundamental astrophysical problem.
"This work is the first of its kind and it creates a basis for a new interdisciplinary approach in astrophysics. We plan to further develop this family of methods and use them to studya broad spectrum of astrophysical phenomena in aspects of star formation and in observational cosmology such as a study of large scale structure of the matter distribution in the Universe", concludes Igor Chilingarian.
Quelle: AAAS
Astronomie
2343 Views
Created with page4