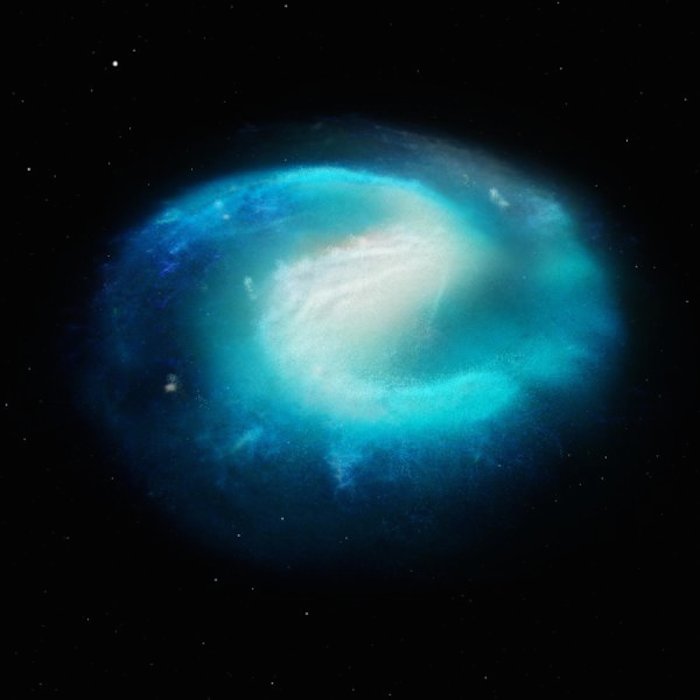 Astronomers smash cosmic records to see hydrogen in distant galaxy
An international team of scientists has pushed the limits of radio astronomy to detect a faint signal emitted by hydrogen gas in a galaxy more than five billion light years away -- almost double the previous record.
Using the Very Large Array of the National Radio Astronomy Observatory in the US, the team observed radio emission from hydrogen in a distant galaxy and found that it would have contained billions of young, massive stars surrounded by clouds of hydrogen gas.
As the most abundant element in the Universe and the raw fuel for creating stars, hydrogen is used by radio astronomers to detect and understand the makeup of other galaxies.
However, until now, radio telescopes have only been able to detect the emission signature of hydrogen from relatively nearby galaxies.
"Due to the upgrade of the Very Large Array, this is the first time we've been able to directly measure atomic hydrogen in a galaxy this far from Earth," lead author, Dr Ximena Fernández from Rutgers, the State University of New Jersey, said.
"These signals would have begun their journey before our planet even existed, and after five billion years of travelling through space without hitting anything, they've fallen into the telescope and allowed us to see this distant galaxy for the very first time."
As an archaeologist digs down they find older and older objects. The same is true for astronomers -- as they build bigger telescopes and develop new techniques to see farther into the Universe, they look further and further back in time.
"This is precisely the goal of the project, to study how gas in galaxies has changed through history," Dr Fernández said.
"A question we hope to answer is whether galaxies in the past had more gas being turned into stars than galaxies today. Our record breaking find is a galaxy with an unusually large amount of hydrogen."
This success for the team comes after the first 178 hours of observing time with the Karl G. Jansky Very Large Array (VLA) radio telescope for a new survey of the sky called the 'COSMOS HI Large Extragalactic Survey', or CHILES for short.
Once it's completed the CHILES survey will have collected data from more than 1,000 hours of observing time.
In a new approach, members of the team including Dr Attila Popping from International Centre for Radio Astronomy Research and the ARC Centre of All-sky Astrophysics (CAASTRO) in Australia are working with Amazon Web Services to process and move the large volumes of data via the 'cloud'.
"For this project we took tens of terabytes of data from the Very Large Array, and then processed it using Amazon's cloud-based servers to create an enormous image cube, ready for our team to analyse and explore," Dr Popping said.
Professor Andreas Wicenec, head of the Data Intensive Astronomy team at the International Centre for Radio Astronomy Research, said the limiting factor for radio astronomers used to be the size of the telescope and the hardware behind it.
"It's fast becoming more about the data and how you move, store and analyse vast volumes of information," he said.
"Big science needs a lot of compute power--right now we're designing systems to manage data for several large facilities around the world and the next generation of radio telescopes, including China's 500m radio telescope, the Square Kilometre Array and the SKA's pathfinder telescopes that are already up and running in outback Western Australia."
The study involved researchers from the US, Australia, the Netherlands, Germany, Korea and Chile, and was published today in the Astrophysical Journal Letters.
The previous record was set in 2014 when two researchers from Swinburne University used the Arecibo radio telescope in Puerto Rico to detect atomic hydrogen in a galaxy three billion light years from Earth.
Quelle: SD
Astronomie
2321 Views
Created with page4