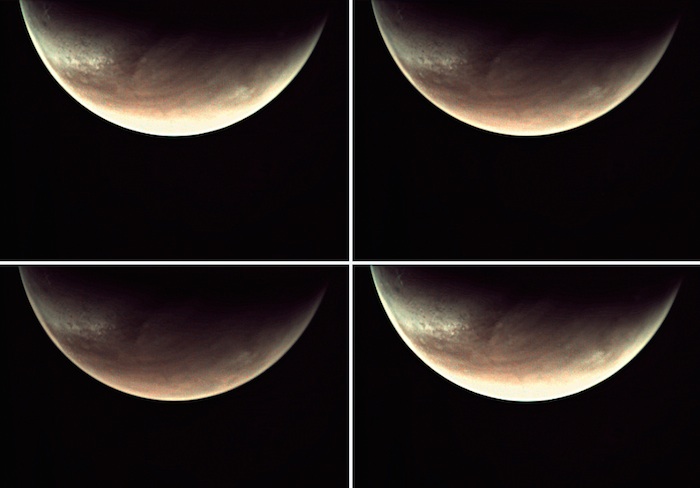 A modest ‘webcam’ on Mars Express has proven useful for outreach, education and citizen-science. Now ESA have decided to adopt it as a professional science instrument.
Mars Express was launched in 2003 with a simple, low-resolution camera to provide visual confirmation that its Beagle 2 lander had separated. Once that was done, the camera was switched off, and the craft got on with its main mission using its ‘real’ scientific instruments .
In 2007, ESA’s flight controllers switched it back on to see if it could still be used, possibly for education or science outreach, without interfering with routine operations or the mission’s prime science investigations.
It still worked well, and the camera's unique vantage point meant it could, for example, capture crescent images of Mars impossible from Earth. Its wide field of view provides global images of the Red Planet, a capability available on only one other Mars craft, India’s orbiter.
“The Mars Webcam has since become hugely popular among a keen and growing community of students, educators, artists and citizen-scientists in dozens of countries in Europe, the Americas, Australia, Africa and Asia,” notes Spacecraft Operations Manager Michel Denis.
Enthusiasts have downloaded, shared and processed images to enhance certain features or boost clarity. Many of these have in turn been reshared via social media. Others have developed software for colour processing or other improvements. Some have even used the images to analyse cloud and aerosol behaviour in the atmosphere, or to determine cloud altitudes.
Today, images are automatically posted to a dedicated Flickr page, on several occasions within 75 minutes of being acquired at Mars, and these are freely shared under a Creative Commons licence.
Millions of views
The page now features over 19 000 images that have been viewed over two million times. The Twitter account has been viewed millions of times.
Most recently, 25 schools and youth clubs in Europe and the US were invited last year to submit imaging requests, and subsequently used their images in a wide variety of scientific, educational and artistic projects.
ESA has long fostered similar outreach efforts, including, for example, the Cooperation through Education in Science and Astronomy Research, or CESAR, project in Spain.
Now, after almost a decade’s service in outreach, the camera is getting a boost.
Quelle: ESA
Astronomie
1894 Views
Created with page4