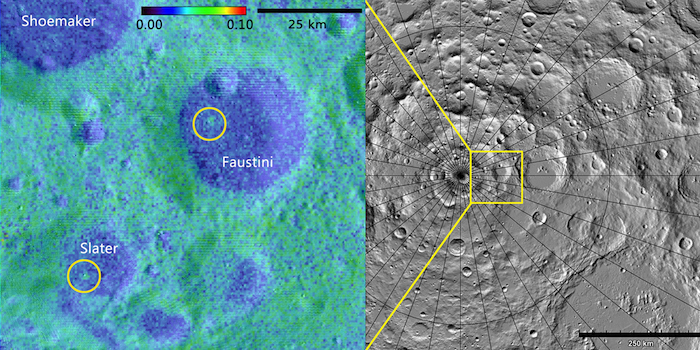 Albedo map credit: NASA GSFC/SwRI
Topographic map credit: NASA GSFC/ASU Jmoon
Using data from the LAMP instrument aboard the Lunar Reconnaissance Orbiter, a Southwest Research Institute-led team of scientists discovered two geologically young craters — one (right) 16 million, the other (left) between 75 and 420 million, years old — in the Moon’s darkest regions. One lies within Slater Crater, named for the late Dr. David C. Slater, a former SwRI space scientist who designed and built the LAMP instrument.
-
San Antonio, Texas — May 23, 2016 — A Southwest Research Institute-led team of scientists discovered two geologically young craters — one 16 million, the other between 75 and 420 million, years old — in the Moon’s darkest regions.
“These ‘young’ impact craters are a really exciting discovery,” said SwRI Senior Research Scientist Dr. Kathleen Mandt, who outlined the findings in a paper published by the journal Icarus. “Finding geologically young craters and honing in on their age helps us understand the collision history in the solar system.”
Key to this discovery was the SwRI-developed Lyman-Alpha Mapping Project (LAMP) instrument aboard the Lunar Reconnaissance Orbiter (LRO). LAMP uses the far-ultraviolet Lyman-alpha band skyglow and light from ultraviolet-bright stars LAMP to “see” in the dark and image the permanently shaded regions of the Moon. Using LAMP and LRO’s Mini-RF radar data, the team mapped the floors of very large, deep craters near the lunar south pole. These deep craters are difficult to study because sunlight never illuminates them directly. Tiny differences in reflectivity, or albedo, measured by LAMP allowed scientists to discover these two craters and estimate their ages.
“We study planetary geology to understand the history of solar system formation,” said SwRI’s Dr. Thomas Greathouse, LAMP deputy principal investigator. “It is exciting and extremely gratifying to happen upon a unique and unexpected new method for the detection and age determination of young craters in the course of nominal operations.”
Collisions in space have played an important role in the formation of the solar system, including the formation of the Moon. Impact craters tell the history of collisions between objects in the solar system. Because the Moon has been peppered with impacts, its surface serves as a record of its past. Determining when collisions occurred helps scientists map the motion of objects in the solar system throughout its history. Craters that are young on geological timescales (millions of years) also provide information on the frequency of collisions.
When a small object collides with a larger object, such as the Moon, the impact creates a crater on the larger body. Craters can be a few feet in diameter or several miles wide. During the impact, the material ejected forms a blanket of material surrounding the crater. The ejecta blankets of “fresh,” relatively young craters have rough surfaces of rubble and a sprinkling of condensed, bright dust. Over millions of years, these features undergo weathering and become covered with layers of fluffy, dark dust.
Scientists determined that the areas around the two craters were brighter and rougher than the surrounding landscape. The team estimated the age of one crater at about 16 million years. The other crater’s rough extended ejecta blanket had faded, showing that this crater must be at least 75 million years old. But time would have completely covered the ejecta blanket in fluffy dust within 420 million years, providing an upper limit on its age. Other images, produced using laser altimetry and sunlight scattered off crater walls, provided details about topography, surface features, and material properties.
“Discovering these two craters and a new way to detect young craters in the most mysterious regions of the Moon is particularly exciting," said Mandt. “This method will be useful not only on the Moon, but also on other interesting bodies, including Mercury, the dwarf planet Ceres, and the asteroid Vesta.”
Quelle: SwRI
Astronomie
1905 Views
Created with page4