Hyper Suprime-Cam on the Subaru Telescope serendipitously captured high-resolution images of Comet 67P/Churyumov-Gerasimenko during the inaugural queue-mode observations last March. The camera was scheduled to observe a distant compact galaxy when the chance came up to capture a view of the comet, and the images reveal fine details in the comet's coma and tails (Figure 1).
Comet 67P is a short-period comet that orbits the Sun every 6.57 years. It is known world-wide as the target of the European Space Agency's comet-chasing Rosetta mission, launched in March 2004. The spacecraft has returned thousands of close-up images and data of the comet and continues to keep pace with the nucleus as it moves away from the Sun.
Capturing a Comet on the Run
Subaru Telescope observed Comet 67P when it was about 200 million km (100 million miles) from the Earth, between the orbits of Mars and Jupiter. Subaru images clearly show a bright coma, long tails, and a faint but clearly visible dust trail.
.

Figure 1: Comet 67P/Churyumov-Gerasimenko as seen through the Hyper Suprime Cam’s wide field of view. The image was taken between 2:40-3:50 on March 8, 2016 (Hawaii Time). A broad-band filter (g-band, 480 nm) was used. The images were rotated to align the comet's orbit in the long axis. The top image is composed of ten 6-minute exposure data, stuck with respect to the background stars positions. The comet itself is blurred due to its move during these exposures. The middle image is created by centering the comet's position, hence the background objects are blurred. The adjustment of the contrast reveals the details of the tails and the inner structure of the coma. The bottom image illustrates the conspicuous features with the Earth's size for comparison. The dust trail outlines the orbit of the comet, which also has a dust tail a little offset from the dust trail.
-
Comet 67P was not the main goal of the observations in which it was captured. The telescope was actually performing a study of the 59th object in the Hickson's Compact Groups of Galaxies Catalog (HCG 59). By a sheer chance, the comet was also visible in the same wide field of view (the largest available among the world's 8- to 10-meter class telescopes) (Figure 2).
. 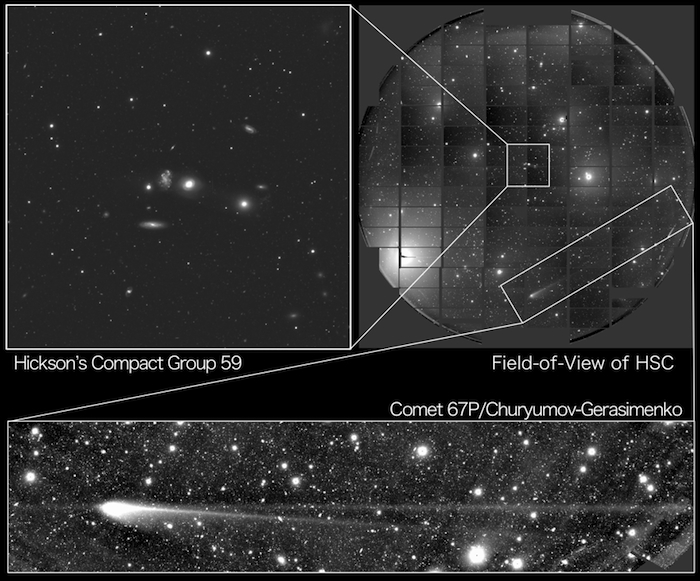 Figure 2: The field of view of the HSC (top right), centered on HCG 59 (enlarged image in the top left). Comet 67P/Churyumov-Gerasimenko is to the bottom right, and its enlarged image at the bottom. At the upper right corner of HCG 59 image, there is a very faint object that is a candidate of an ultra diffuse galaxy.
-
Timing is Everything
The telescope was pointed at the particular region of sky during the inaugural observation mode called "queue mode". During queue mode, targets are chosen from a pre-selected list with respect to the sky conditions and the scientific priority of the targets in the list. As it turned out, the night of March 7 was the very first night of the queue mode observation for HSC on Subaru.
Originally another target was in the queue at the time of the observation. However, the transparency of the atmosphere for that target was not ideal because of thin clouds. The HCG 59 observation was then moved to the top of the queue since it did not require such exacting conditions. As it turned out, Comet 67P was in the same wide field of view as the HCG 59.
The timing was perfect. Due to its relatively rapid motion, 67P would have not shown up in the HCG 59 field if the galaxy group observation had not been moved up in the queue in that week (Figure 3).
.

Figure 3: Image showing the movement of the comet's coma. The gif image is composed of three shots within a 20-minute interval. The orientation of this image is the same as Figure 1. The HSC points to a slightly different position, so the CCD gap (shown in white lines) with respect to the comet changes. The apparent elongation of the coma is due to the motion of the comet during the 6 minutes exposure. The angular size of the image is 5.6 x 5.6 arcminutes.
-
Dr. Masafumi Yagi of the National Astronomical Observatory of Japan and Hosei University, who proposed the observation of the galaxy group, commented on the lucky turn of events. "I was pleasantly surprised to hear that our target was in the queue even though it did not have the higher priority," he said. "Even more so to see this interesting object in the field of view!"
Thanks to this serendipitous set of observations Subaru Telescope and HSC are contributing welcome ground-based data to the study of Comet 67P. Because the image of the 67P/Churyumov-Gerasimenko shows a dust trail in addition to the dust tail, the research group is now in discussion with comet experts. Even though the presence of this dust trail was already known, there could well be an interesting finding from these HSC images about the nature of the dust trails.
Quelle: Subaru Telescope NAOJ
Astronomie
« Zum vorherigen Eintrag Zum nächsten Eintrag »
2249 Views
Created with page4