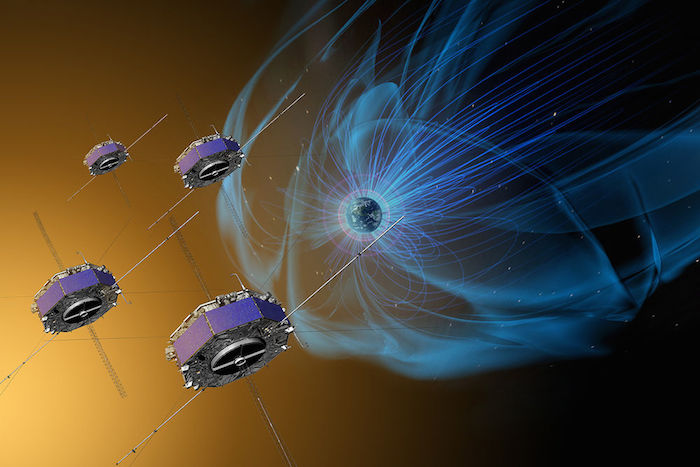 A rendering of NASA's four spacecraft as they probe a magnetic reconnection event
-
As part of NASA’s Magnetospheric Multiscale Mission, four spacecraft have been cruising through the boundary where the Earth's magnetic field bumps up against the Sun's for the past year. Like sending sensors into a storm, the idea is to learn more about the physics of what happens in the heart of the magnetosphere.
The coronal mass ejection of a solar flare sends fast moving solar particles with a strong magnetic field. Occasionally, those interact with our own planet’s magnetosphere and cause something called magnetic reconnection, which causes such phenomena as auroras.
Now, after 4,000 trips through the boundary, NASA's probes have observed a magnetic reconnection event for first time. Flying in in a pyramid formation, the four spacecraft are equipped with 25 sensors each, to create a 3-D map of their surroundings.
"The decades-old mystery is what do the electrons do, and how do the two magnetic fields interconnect," principal investigator Jim Burch said in a statement. "Satellite measurements of electrons have been too slow by a factor of 100 to sample the magnetic reconnection region. The precision and speed of the MMS measurements, however, opened up a new window on the universe, a new 'microscope' to see reconnection."
With this new data, the scientists were able to determine that electrons shoot off, away from the reconnection event, in straight lines. They travel at speeds of hundreds of miles per second, and end up passing through magnetic boundaries that would usually deflect them. They travel through the new magnetic field for a ways before turning around and heading back home. So far, scientists' understanding of magnetic reconnection has come from lab experiments and computer models. Now that they've been able to observe--and will continue to make more observations throughout the mission--scientists can start to gain a better understanding of the space environment. Which, NASA says, is all the more crucial for when humans begin to travel further from our home planet.
You can watch a rendering of this process in NASA's video-frams below: 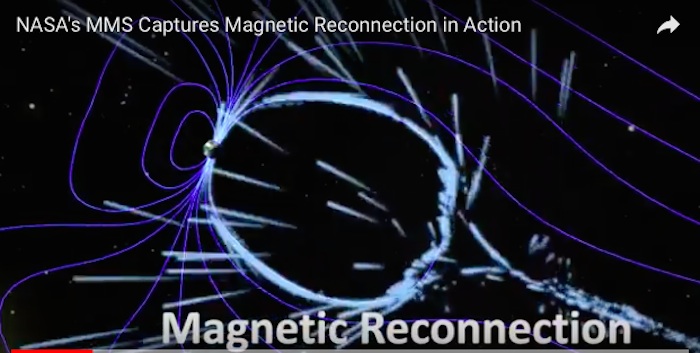