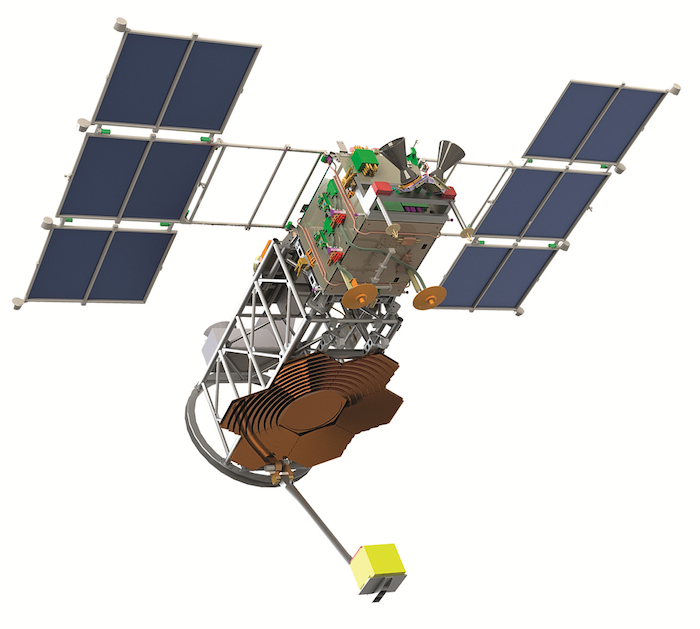 A session of the scientific data transmission from the orbit satellite Lomonosov, launched by Moscow State University on April 28th, took place on May 11th. Preliminary analysis of the data from the satellite showed that the inclusion of the in-orbit scientific equipment of Moscow University was successful and confirmed its absolute serviceability and performance. The height of the satellite is about three meters and the weight is 650 kg (this is a considerable weight for space), about 200 kg of the equipment is intended for scientific research.
As explained by the rector of  Moscow State University Viktor Sadovnichy, ‘’it is actually a space station.  All devices for ‘Lomonosov’ station were made by scientists, students and post-graduate students of Moscow State University. Such a station can be created by a university or a team that has extensive experience. We have been involved in space research since 1957, when the second artificial satellite of Earth was launched. And then, almost every satellite, every spacecraft, the International Space Station certainly had devices of the MSU. We have extensive experience in the preparation of such devices, such satellites, "
In addition, in 2005 we began launching our own satellites. "Not just equipment for them, our own satellites. 'Lomonosov' is the sixth satellite we have launched since 2005. It is also experience. Our first satellites had a different class, they weighed only 30-50 kg." 'Tatiana-1' and 'Tatiana-2', as well as 'YouthSat', 'RELEK' and 'NUCLEON’- all these satellites were made by the MSU, which is the only university in the world that can make such a station and launch it.We will certainly make a breakthrough in the exploration of space
He also called the scientific directions in which research is being conducted.
The first one is the detection of high-energy particles that come here from other galaxies.
Second. Gamma-ray bursts of ultra-high capacity. ‘’We detect them in different ranges: X-ray, ultraviolet and visible. This is the advantage of our station, we detect these bursts in different ranges. They are also very important for research, because they pose a danger during space exploration. It is ultra-high energy,’’ the rector of Moscow State University said.
The third direction is radiation conditions. ‘’This is a feature of all the scientific discoveries of Moscow State University. The thing is that the radiation belts that surround the Earth were discovered by MSU scientists. There was a scientist, Sergey Nikolaevich Vernov, he made this discovery. And they pose a danger to astronauts,’’ Sadovnichy said.
The fourth is asteroid danger..
The fifth directions is space debris. ‘’Space is clogged. It is already dangerous for flights. And our satellite observes and analyzes the clusters of debris,’’ the rector said.
The sixth direction is the study of the behavior of the living organism in space. ‘’detects these changes, the response to acceleration, and sends us information that will be used in the training of astronauts,"  Viktor Sadovnichy said.
Quelle: VESTNIK
Raumfahrt
« Zum vorherigen Eintrag Zum nächsten Eintrag »
2327 Views
Created with page4