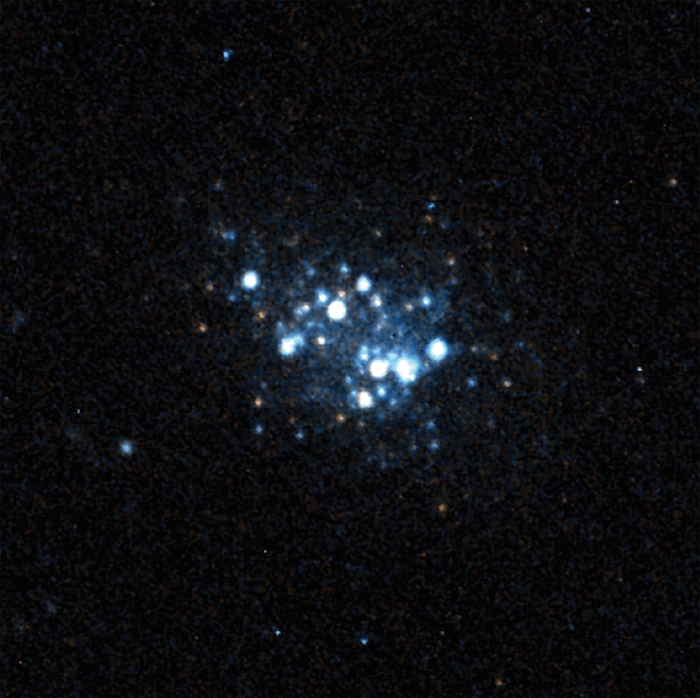 Small blue galaxy could shed new light on Big Bang, IU astronomers say
'Little lion' galaxy contains lowest level of heavy elements ever detected in gravitationally bound system of stars
-
BLOOMINGTON, Ind. -- A faint blue galaxy about 30 million light-years from Earth and located in the constellation Leo Minor could shed new light on conditions at the birth of the universe.
Astronomers at Indiana University recently found that a galaxy nicknamed Leoncino, or “little lion,” contains the lowest level of heavy chemical elements, or “metals,” ever observed in a gravitationally bound system of stars.
The study appears today in the Astrophysical Journal. The lead author on the paper is Alec S. Hirschauer, a graduate student in the IU Bloomington College of Arts and Sciences’ Department of Astronomy. Other IU authors on the paper are professor John J. Salzer and associate professor Katherine L. Rhode in the Department of Astronomy.
"Finding the most metal-poor galaxy ever is exciting since it could help contribute to a quantitative test of the Big Bang," Salzer said. "There are relatively few ways to explore conditions at the birth of the universe, but low-metal galaxies are among the most promising."
This is because the current accepted model of the start of the universe makes clear predictions about the amount of helium and hydrogen present during the Big Bang, and the ratio of these atoms in metal-poor galaxies provides a direct test of the model.
In astronomy, any element other than hydrogen or helium is referred to as a metal. The elemental make-up of metal-poor galaxies is very close to that of the early universe.
To find these low-metal galaxies, however, astronomers must look far from home. Our own Milky Way galaxy is a poor source of data due to the high level of heavier elements created over time by "stellar processing," in which stars churn out heavier elements through nucleosynthesis and then distribute these atoms back into the galaxy when they explode as supernovae.
"Low metal abundance is essentially a sign that very little stellar activity has taken place compared to most galaxies," Hirschauer said.
Leoncino is considered a member of the "local universe," a region of space within about 1 billion light years from Earth and estimated to contain several million galaxies, of which only a small portion have been cataloged. A galaxy previously recognized to possess the lowest metal abundance was identified in 2005; however, Leoncino has an estimated 29 percent lower metal abundance.
The abundance of elements in a galaxy is estimated based upon spectroscopic observations, which capture the light waves emitted by these systems. These observations allow astronomers to view the light emitted by galaxies like a rainbow created when a prism disperses sunlight.
Regions of space that form stars, for example, emit light that contains specific types of bright lines, each indicating the atoms from various gases: hydrogen, helium, oxygen, nitrogen and more. In the light of the star-forming region in Leoncino, IU scientists detected lines from these elements, after which they used the laws of atomic physics to calculate the abundance of specific elements.
"A picture is worth a thousand words, but a spectrum is worth a thousand pictures," Salzer said. "It's astonishing the amount of information we can gather about places millions of light years away."
The study's observations were made by spectrographs on two telescopes in Arizona: the Mayall 4-meter telescope at the Kitt Peak National Observatory and the Multiple Mirror Telescope at the summit of Mount Hopkins near Tucson. The galaxy was originally discovered by Cornell University's Arecibo Legacy Fast ALFA, or ALFALFA, radio survey project.
Officially, the "little lion" is named AGC 198691. The scientists who conducted the metal abundance analysis nicknamed the galaxy Leoncino in honor of both its constellation location and in recognition of the Italian-born radio astronomer, Riccardo Giovanelli, who led the group that first identified the galaxy.
Aside from low levels of heavier elements, Leoncino is unique in several other ways. A so-called "dwarf galaxy," it's only about 1,000 light years in diameter and composed of several million stars. The Milky Way, by comparison, contains an estimated 200 billion to 400 billion stars. Leoncino is also blue in color, due to the presence of recently formed hot stars, but surprisingly dim, with the lowest luminosity level ever observed in a system of its type.
"We're eager to continue to explore this mysterious galaxy," said Salzer, who is pursuing observing time on other telescopes, including the Hubble Space Telescope, to delve deeper into this fascinating object. "Low-metal-abundance galaxies are extremely rare, so we want to learn everything we can."
Other authors on the paper are Evan D. Skillman of the University of Minnesota; Danielle Berg of the University of Wisconsin Milwaukee; Kristen B.W. McQuinn of the University of Texas at Austin; John M. Cannon and Alex J.R. Gordon of Macalester College in St. Paul, Minn.; Martha P. Haynes and Riccardo Giovanelli of Cornell University; Elizabeth A.K. Adams of the Netherlands Institute for Radio Astronomy; Steven Janowiecki of the University of Western Australia; Richard W. Pogge and Kevin V. Croxall of The Ohio State University; and Erik Aver of Gonzaga University.
This research was supported in part by the National Science Foundation, the National Aeronautics and Space Administration and the Brinson Foundation.
Quelle: Indiana University
Astronomie
« Zum vorherigen Eintrag Zum nächsten Eintrag »
1950 Views
Created with page4