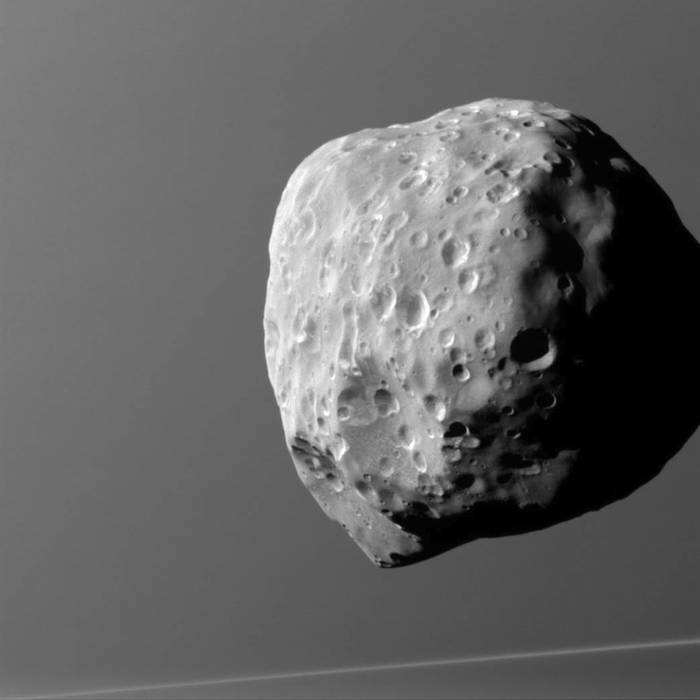 Life is hard for a little moon. Epimetheus, seen here with Saturn in the background, is lumpy and misshapen, thanks in part to its size and formation process. Epimetheus did not form with all of those craters in place -- rather, bombardment over the eons has left this tiny moon's surface heavily pitted.
Epimetheus (70 miles or 113 kilometers across) is too small to have sufficient self-gravity to form itself into a round shape, and it has too little internal heat to sustain ongoing geological activity. Thus, its battered shape provides hints about its formation, and the myriad craters across its surface bear testament to the impacts it has suffered over its long history.
North on Epimetheus is up and rotated 5 degrees to the left. The image was taken in visible light with the Cassini spacecraft narrow-angle camera on Dec. 6, 2015.
The view was obtained at a distance of approximately 1,670 miles (2,690 kilometers) from Epimetheus. Image scale on Epimetheus is 520 feet (160 meters) per pixel.
The Cassini mission is a cooperative project of NASA, ESA (the European Space Agency) and the Italian Space Agency. The Jet Propulsion Laboratory, a division of the California Institute of Technology in Pasadena, manages the mission for NASA's Science Mission Directorate, Washington. The Cassini orbiter and its two onboard cameras were designed, developed and assembled at JPL. The imaging operations center is based at the Space Science Institute in Boulder, Colorado.
Quelle: NASA
Astronomie
« Zum vorherigen Eintrag Zum nächsten Eintrag »
2400 Views
Created with page4