Galaxy-sized peanuts? Astronomers use new imaging software to detect double ‘peanut shell’ galaxy
-
Astronomers at Swinburne University of Technology, Melbourne, have discovered an unusually shaped structure in two nearby disc galaxies. The Swinburne team recently developed new imaging software, making it possible to observe the double “peanut shell shape” formed by the distribution of stars bulging from the centres of these galaxies. The results are published in a new paper in Monthly Notices of the Royal Astronomical Society.
. 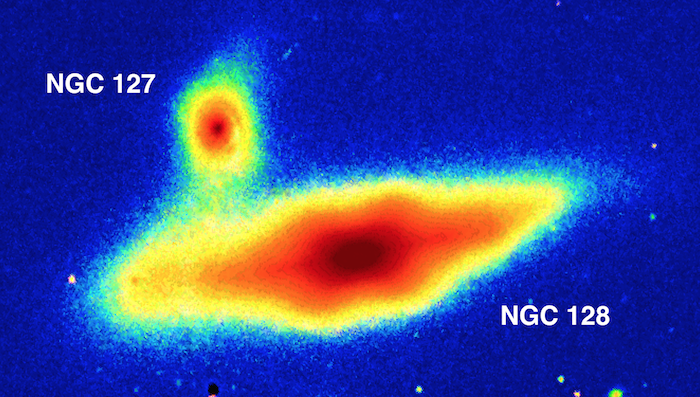 The large (peanut shell)-shaped bulge at the centre of the disc galaxy NGC 128. Credit: Sloan Digital Sky Survey / Aladin Sky Atlas / A.Graham, B.Ciambur (Swinburne University of Technology)
-
Using data from the Hubble Space Telescope and the Sloan Digital Sky Survey, the researchers realised that two of the galaxies they were studying – NGC 128 and NGC 2549 – were quite exceptional. They are roughly 200 and 60 million light years away respectively, in the constellations of Pisces and Lynx, and they displayed a peanut shell configuration at two separate layers within the galaxies’ three-dimensional distribution of stars.
“Ironically, these peanut-shaped structures are far from peanut-sized,” says Swinburne’s Professor Alister Graham, co-author of the research. “They consist of billions of stars typically spanning up to a quarter of the length of the galaxies.”
Although the ‘bulges’ of both galaxies were already known to display a single peanut shell pattern, astronomers had never before observed the fainter second structure in any galaxy.
- 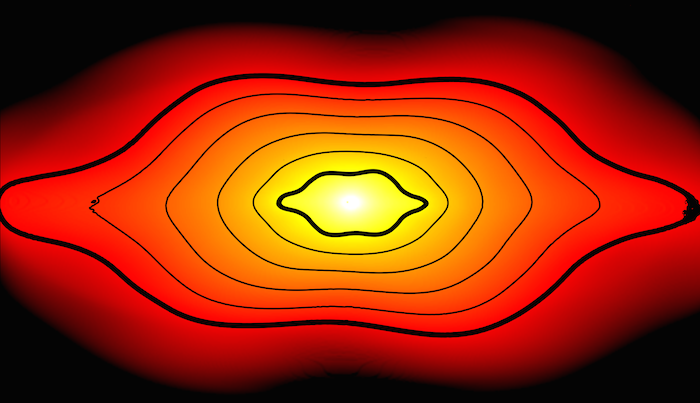 A model of the galaxy NGC 128, based on a Hubble Space Telescope image. Credit: B. Ciambur (Swinburne University of Technology)
-
“They resemble two peanut shells, with one neatly nested within the other; this is the first time such a phenomenon has been observed,” says Bogdan Ciambur, the PhD student who led the investigation.
“We expect the galaxies’ surprising anatomy will provide us with a unique view into their pasts. Deciphering their history can tell us about transformations that galaxies like our own Milky Way might experience.”
Astronomers believe that peanut shaped bulges are linked to the bar-shaped distribution of stars that is observed across the centres of many rotating galaxy discs. Each of the two galaxies observed contain two such bars, and it is thought that one way the peanut shaped structures may arise is when these bars of stars bend above and below the galaxy’s central disc.
“The instability mechanism may be similar to water running through a garden hose: when the water pressure is low, the hose remains still (stars stay on their usual orbits), but when the pressure is high the hose starts to bend (stellar orbits bend outside of the disc plane),” says Mr Ciambur.
“By directly comparing real galaxies with state-of-the-art simulations, we hope to better understand how galaxies evolve,” says Mr Ciambur. “The discovery is exciting because it will enable us to more fully test the growth of bars over time, including their lengths, rotation speeds, and periods of instability.
The study may also shed new light on the peanut-shaped bulge of our own Milky Way galaxy, which some astronomers suspect contains two stellar bars.
“Thankfully we are too distant from our Galaxy’s bulge to get caught up in the dizzying orbits that lead to these interesting peanut shell patterns,” adds Professor Graham. “However, this is an ideal vantage point to study our Galaxy’s stellar bulge.”
Quelle: The Royal Astronomical Society
Astronomie
« Zum vorherigen Eintrag Zum nächsten Eintrag »
2093 Views
Created with page4