"SPACE LIGHTNING" OVER TEXAS: You know what comes out of the bottom of thunderstorms: lightning. On April 27th, Kevin Palivec of Hawley, Texas, saw something coming out of the top. "Storms moving across Texas produce more than just rain, wind, hail and tornadoes!" says Palivec. "They also produce a lot of space lightning called 'sprites.' This is a stacked image of all the sprites I caught over storms as they moved across Texas towards Dallas/Ft Worth--with one meteor thrown in!" 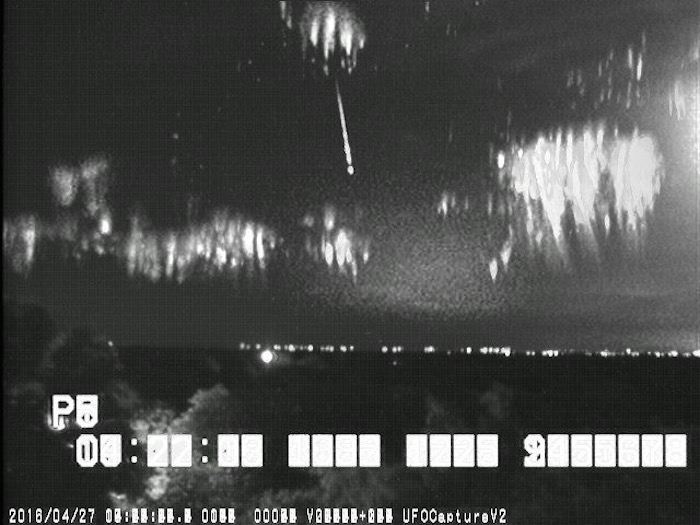 Because sprites are associated with thunderstorms, they tend to occur in late spring and summer. Palivec's photo shows that sprite season is now underway.
Sprites are a true space weather phenomenon, inhabiting the upper reaches of Earth's atmosphere alongside noctilucent clouds, meteors, and some auroras. Some researchers believe they are linked to cosmic rays: subatomic particles from deep space striking the top of Earth's atmosphere produce secondary electrons that, in turn, could provide the spark that triggers sprites.
"Sprites develop in mid-air very high above Earth's surface, around 80 km altitude, growing in both directions, first down, then up," says explains lightning scientist Oscar van der Velde of the Technical University of Catalonia, Spain. "An individual sprite lasts only around 5-50 milliseconds but a sequence of them can be seen to 'dance' over storm fronts for a much longer period of time."
Although sprites have been seen for at least a century, most scientists did not believe they existed until after 1989 when sprites were photographed by cameras onboard the space shuttle. Now "sprite chasers" routinely photograph sprites from their own homes. Give it a try!
Quelle: Spaceweather
Astronomie
« Zum vorherigen Eintrag Zum nächsten Eintrag »
2353 Views
Created with page4