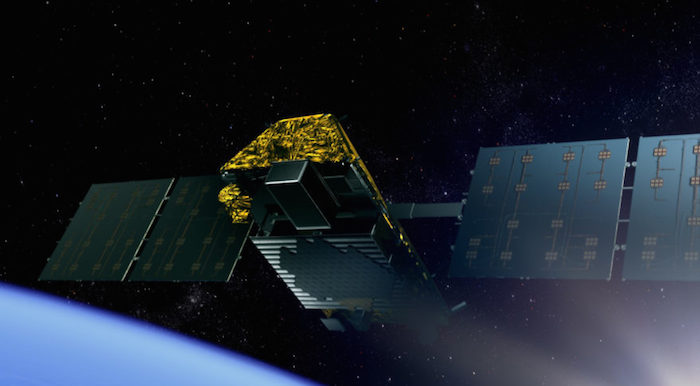 PARIS — Mobile satellite services provider Iridium Communications on April 28 said the contracting team for its second-generation Iridium Next constellation had put past delays behind it and would be ready for a first launch of 10 satellites in late July aboard a SpaceX Falcon 9 rocket.
McLean, Virginia-based Iridium said the launch date could slip by a few weeks, depending on SpaceX’s management of its busy manifest. But satellite prime contractor Thales Alenia Space of France and Italy, and Orbital ATK of Dulles, Virginia, which is handling the satellites’ assembly, integration and test, will have 10 satellites ready for the July rendezvous.
Iridium said that by midsummer, the Iridium Next builders should be producing five Iridium Next satellites per month to meet Iridium’s aggressive schedule.
Iridium’s second-generation, like its first, consists of 66 satellites in low Earth orbit. The company has confronted multiple delays for satellite software and hardware issues that have pushed the first launch to where it is now.
Iridium Chief Executive Matt Desch, in a conference call with investors, said the company has recently performed a fresh review of the status of the current constellation – well past its retirement date – and concluded that it remains in good enough health to operate for several years.
Nonetheless, the possibility of a satellite in-orbit failure, plus the enhanced mobile communications features of Iridium Next, have made Iridium anxious to put the second-generation fleet into service.
The current plan is a first launch of 10 satellites aboard SpaceX’s Falcon 9, from Vandenberg Air Force Base, California, in July. Six other Falcon 9 rockets, each carrying 10 satellites, are scheduled to launch by late 2017.
Desch said Iridium was seventh in line on SpaceX’s current manifest. But all six of the other launches occur from Cape Canaveral Air Force Station, Florida. Desch said a delay on one of them would not necessarily mean a corresponding delay for Iridium.
Rounding out the 72-satellite constellation, including eight spares, a Russian-Ukrainian Dnepr rocket is scheduled to launch two Iridium Next satellites, but the launch date has not been confirmed. Russian-Ukrainian tensions have thrown the Dnepr schedule into question.
Iridium’s debt covenants require that the company secure insurance for the satellites’ launch and their first 12 months of operations. The covenants further require that, for the first two SpaceX launches, the insurance package be secured three months before launch.
Iridium Chief Financial Officer Thomas J. Fitzpatrick said during the conference call that the company was within days of finalizing the insurance package. Iridium expects to keep its total Iridium Next insurance cost to around $125 million by self-insurance part of the risk.
The Iridium contract with Hawthorne, California-based SpaceX, valued at $468.1 million, includes the possibility of an eighth launch if one of the seven committed flights fails.
Iridium’s contract with Thales Alenia Space and Orbital ATK is for the delivery of 81 satellites. The nine surplus spacecraft will remain on the ground as spares but could serve as replacements in the event of a Falcon 9 failure.
As of March 31, Iridium had paid SpaceX $315.3 million for the seven launches. Iridium a refundable $3 million deposit for future launches.
Iridium is trying to win over prospective satellite owners to using the Iridium satellite platform and network control expertise to build their own satellites, with Iridium managing the contract with Thales Alenia Space.
The effort, called Iridium Prime, is based on the idea that Thales Alenia Space, having built 81 Iridium Next satellites, could produce variations of the same satellites at a much lower cost if the orders arrived in time for a smooth transition from Iridium Next.
OneWeb Satellites, a OneWeb-Airbus joint venture, recently announced a satellite facility in Exploration Park, Florida, that would have the same purpose of maintaining a durable production line after OneWeb’s 900 small satellites are completed.
Iridium reported that it had 713,000 commercial subscribers as of March 31, up marginally from 710,000 on Dec. 31. Recent growth has been in machine-to-machine (M2) subscribers, which now account for 51 percent of the subscriber count.
Voice and data subscribers were about unchanged at 348,000. These customers pay an average of $40 per month. Commercial M2M customers pay $14 per month.
One the government side, Iridium’s new contract with the U.S. Defense Department helped increase subscriber count and revenue. Subscribers totaled 75,000 as of March 31, up from 72,000 at Dec. 31. Government service revenue was $22 million, up 22 percent from a year ago.
Quelle: SN
Raumfahrt
« Zum vorherigen Eintrag Zum nächsten Eintrag »
2074 Views
Created with page4