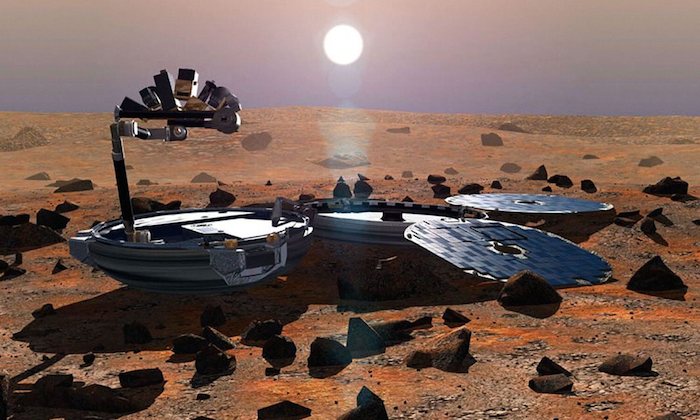 Beagle 2: most detailed images yet of lost Mars lander revealed
New pictures are most detailed images of Mars ever achieved from an orbiting spacecraft and seem to add weight to theory on Beagle 2’s final resting place
-
Astronomers have revealed the most detailed images yet of what is thought to be the landing site of the ill-fated Mars lander, Beagle 2, offering further evidence that the British spacecraft failed to phone-home because of problems following touchdown.
Showing a bright blip in dusty terrain, the new picture is four times the resolution of previous images. The image adds weight to the theory that the diminutive spacecraft - just under a metre in diameter - landed as planned on Mars in 2003, but failed to fully unfurl its solar panels. “Given the size of Beagle 2, even with super-resolution images you are not likely to see more than a series of blobs because it is so small,” said Mark Sims, of the University of Leicester and former mission manager for Beagle 2. “What it does show is that it is on the surface and it is at least partially deployed.”
Launched on board the European Space Agency’s Mars Express Orbiter, the Beagle 2 spacecraft was due to touchdown on Mars on Christmas Day in 2003. But after leaving the mother craft it failed to make contact with Earth, leading to speculation that the lander had crashed.
But a series of clues have since indicated that the hitch likely occurred after it landed correctly on the planet’s surface. Last year Sims and colleagues including John Bridges, also at Leicester University, revealed an image from Nasa’s High Resolution Imaging Science Experiment (HiRISE) on board the Mars Reconnaissance Orbiter, that showed a trio of specks on the planet’s surface, thought to be Beagle 2, its parachute and rear cover.
. 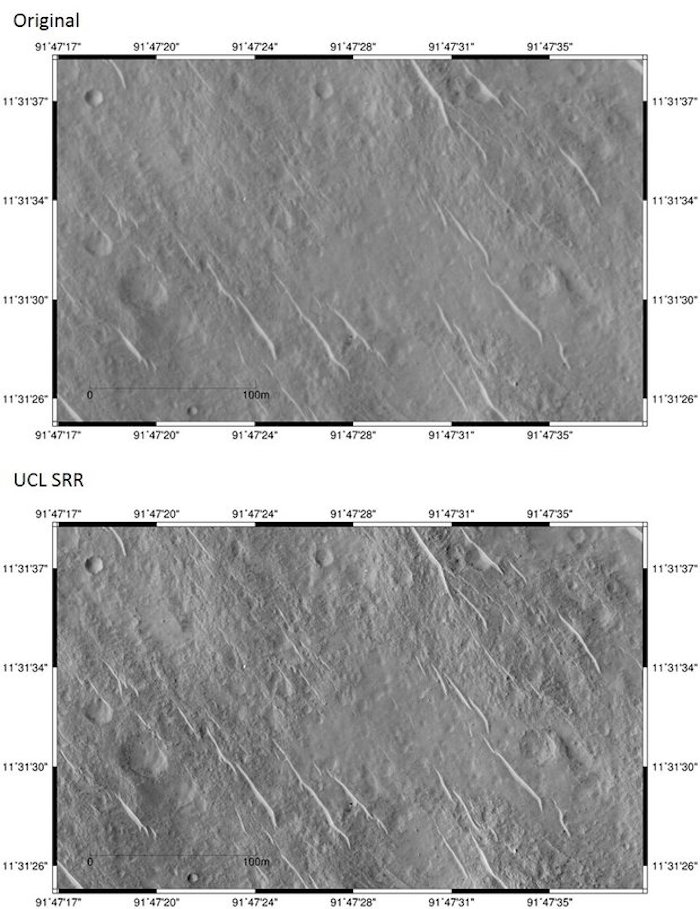 The top image is one of the original HiRISE images. Below is the newly-created SRR image. The bright dot at approximately 91º47’28.5”, 11º 31’ 37” is thought to be the Beagle 2 lander. Photograph: Nasa/UCL/University of Leicester
Now researchers at University College, London, have improved the resolution of the HiRISE images, to produce the most detailed pictures of Mars ever achieved from an orbiting spacecraft. The technique, known as Super-Resolution Restoration (SRR), involved stacking and matching up to eight HiRISE images of the same area - the first results of which were revealed by the team in February. “Each of the images are taken from a slightly different angle,” said Muller.
While each HiRISE image has a resolution of around 25cm, the technique allowed the team to produce images of the Martian landscape with a resolution of just 5cm, allowing much finer detail to be observed than ever before. In the case of the Beagle-2 landing site, five images were compiled resulting in a four-fold improvement in resolution. But it’s a lengthy process. “It takes three days on our fastest computers to do a small scene of 2,000 by 1,000 pixels,” said Jan-Peter Muller, from University College, London who led the work. “We can’t yet do an entire scene.”
.

When researchers zoomed in on the ‘bright dot’ seen in the picture above, and then applied the new SRR system, the outline of what seems to be Beagle 2 became clearer. Photograph: Nasa/UCL/University of Leicester
The results, they say, confirm the idea that Beagle 2 did indeed make it to the red planet. “Intriguingly it isn’t a single white blob which is how it was represented last time around,” said Muller,. “We can now actually see a y-shape on the left hand side and some distortions as well on the right.”
But understanding what happened to Beagle 2, says Sims, isn’t just about unpicking the past - it could also help with future missions. “It’s important to tease the mystery apart because you want to know why it didn’t fully deploy,” he said. “You need to have some idea of how far you got, what might have been the good parts of your design, what might have been the parts which you would improve at a later date.”
While the new shot of the Beagle 2 site appears, to the untrained eye, to show little more than a y-shaped blob, Muller believes the technique has the potential to yield even greater detail. “We have provided the highest ever resolution pictures of the surface and we are going to keep going - the more pictures we get the better the resolution,” he said. “There is no theoretical limit at this point in time to what we can achieve.”
The Beagle 2 site isn’t the only super-resolution image to be released by the team. Among the pictures produced with the SRR technique are views of the planet’s ancient lake beds, showing their craggy forms in breathtaking detail. Also visible are the erratic tracks of Nasa’s Spirit rover which roamed Mars from 2004, sending its last communication in 2010.
. 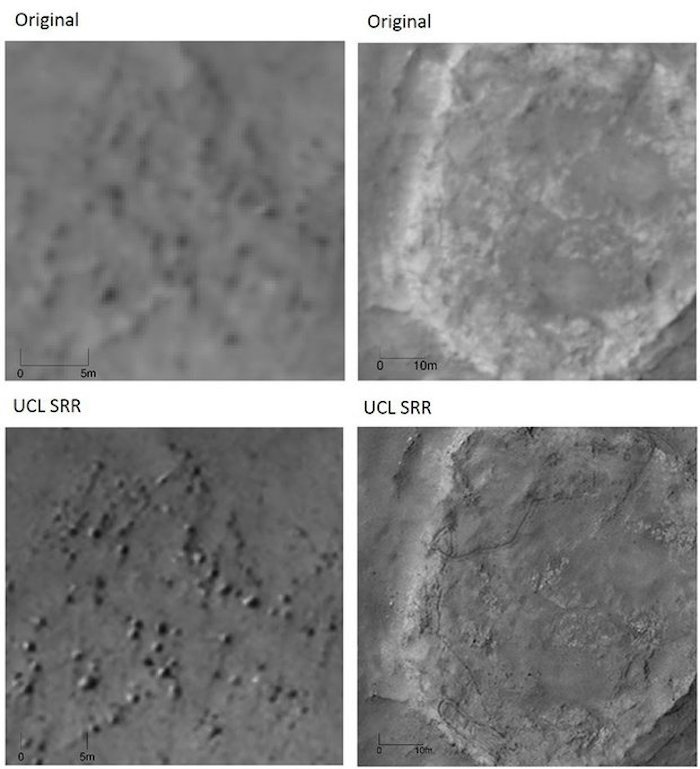 Two of the original HiRISE images are shown on the top line. Below, the new SRR images reveal a rock filed (left) and the tracks of Nasa’s Spirit rover (right). Photograph: Nasa/UCL/University of Leicester
Scientists believe such high-res images could be a boon when it comes to choosing the landing site of future missions including the European Space Agency’s ExoMars mission which will see a lander touch down in October this year, followed by a rover in 2018 that will search for life on the planet.
The SRR technique, Muller adds, could also shed light on a number of mysteries in the Martian landscape, including the suggestion that there is flowing water on the planet. “We are creating images which allow us to see the same features what we would in a rover from 5 metres away,” he said, adding that it isn’t just Mars, but bodies as distant as the moons of Jupiter that could be revealed in stunning details. “We could do this for the Moon and we can do this in the future for Europa and Ganymede,” he said. “It opens up a new way of being able to see features that we would see if we were walking on the surface.”
Quelle: theguardian
Mars-Chroniken
« Zum vorherigen Eintrag Zum nächsten Eintrag »
1999 Views
Created with page4