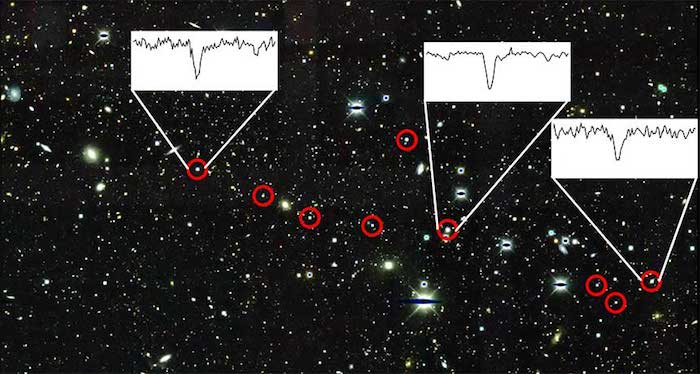 HEAVY METALS  Scientists observed nine stars (circled) in the dwarf galaxy Reticulum II. Their data (shown for three stars) indicated the presence of heavy elements, formed through a sequence of reactions known as the “r-process.”
.
SALT LAKE CITY — In the primeval universe, a violent event roiled a dwarf galaxy, leaving an indelible mark on the stars that formed there. Scientists reached that conclusion after finding traces of heavy elements produced by the cataclysm in the ancient dwarf galaxy Reticulum II.
“It might be the first time where we can distinctly point to something and say, ‘One thing happened in this galaxy 13 billion years ago,’” says Alexander Ji of MIT, who presented the research April 19 at a meeting of the American Physical Society.
Many of the universe’s heaviest elements form primarily through the r-process, a chain of reactions through which atomic nuclei climb the periodic table, swallowing up neutrons and decaying radioactively. But scientists don’t agree on where the seeds of these heavy elements are sown, except that it must be an environment rich in neutrons.
Ji and collaborators used the Magellan telescopes in Chile to perform their “stellar archaeology,” cataloging chemical elements in nine of Reticulum II’s stars. Seven of those stars contained heavy elements, like europium, gadolinium and neodymium, in just the proportions produced by the r-process.
Since most similar dwarf galaxies show no conclusive evidence of r-process elements, the scientists deduced that the event must be rare. This restriction helped pin down what event produced the elements, eliminating relatively common occurrences such as a type of exploding star known as a core-collapse supernova. Instead, the progenitor was probably a collision of two neutron stars, or a rare type of stellar explosion that spews jets of material, the researchers say.
Quelle: ScienceNews
Astronomie
1988 Views
Created with page4