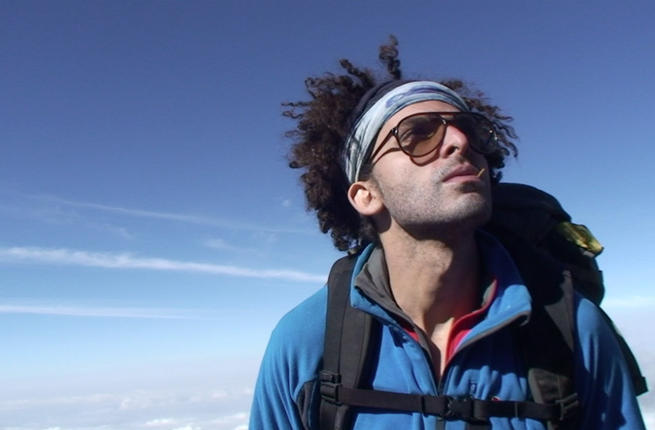 Omar Samra, the first Egyptian to climb Mount Everest, is one step closer to achieving the next dream on his bucket list: going to space.
An entrepreneur, mountaineer, and adventurer, Samra's thrill-seeking attitude has led him to conquer every exploration challenge on earth, leaving only the final frontier on his plate.
Although space travel has long piqued his interest, becoming an astronaut never seemed feasible given the hefty price tag attached. However, that changed in 2013 when a global competition was announced that would select 23 individuals for a flight to space.
Out of two million applicants, Samra was selected as the only astronaut from the Middle East region.
Samra recently completed the first step necessary to becoming an astronaut after graduating from the PoSSUM Scientist-Astronaut Qualification Program last week.
The NASA-supported programme that will lift Samra into space is a suborbital research and education programme devoted to the study of space. In the PoSSUM programme, flights are sent to earth's outer atmosphere to collect as much data as possible to help scientists understand more about climate change.‎
Samra is also using this as a chance to advance education about outer space and generate interest in science in his home country.
"I'm very excited to have been able to further my space-science knowledge, as this not only opens the door to contributing in a new field of research but also perfectly complements my upcoming national school project, in which I plan to roll-out a space competition in 100 schools across 28 governorates in the fall of 2016," said Omar Samra.
"Students will come up with ideas for scientific experiments in space then a judging panel will help the winning team turn their idea into an actual experiment which will be placed in a payload on my upcoming space journey.
"Climate change is the single biggest threat to our planet's survival today. It's an honour to have been admitted into this prestigious programme and I look forward to use these newly acquired tools to be part of the solution."
During the training session, Samra, and two other Egyptians in the programme learned how to operate a PoSSUM camera and sampling instruments used for research during flights to space. Samra was trained by NASA astronaut instructors and a team of scientists.
Samra and his colleagues also received G-force training, space crew resource management and spacesuit training, and completed a comprehensive study on noctilucent cloud science.
Along with being the first Egyptian to conquer Mount Everest, Samra is also the only Egyptian to have climbed the highest summit on each of the seven continents, known as The 7-Summits challenge. In 2015, Samra also completed the Explorer's Grand Slam, which includes The 7-Summits challenge in addition to skiing to both the north and south poles.
Quelle: Al Bawaba
Raumfahrt
2197 Views
Created with page4