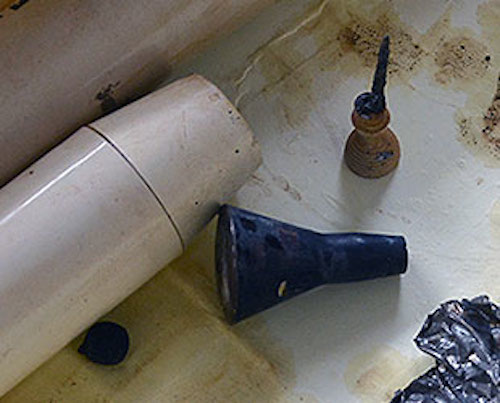 A NASA model of a Gemini-Titan II launch vehicle was found inside a time capsule buried 50 years ago in Houston.
-
April 20, 2016 — The first item pulled out from the newly-unearthed time capsule was a small, conical piece of black plastic.
"A Mercury capsule!" someone called out from among the several dozen spectators.
"Apollo!" another among the crowd declared.
In fact, it was a model of a Gemini spacecraft, the two-man capsule that NASA was flying at the time the archive was buried outside the Clear Lake Theatre in Houston on April 20, 1966. Following the Gemini out of the ground were the parts for its launch vehicle, the Titan II rocket, and a stand for the vintage desktop model.
Unfortunately for the Freeman Memorial Library (or as it is known today, the Clear Lake City-County Freeman Branch Library), the benefactor of the time capsule's contents as was engraved on the half-century-old plaque that covered it, next out of the buried steel box were several buckets full of water.
. 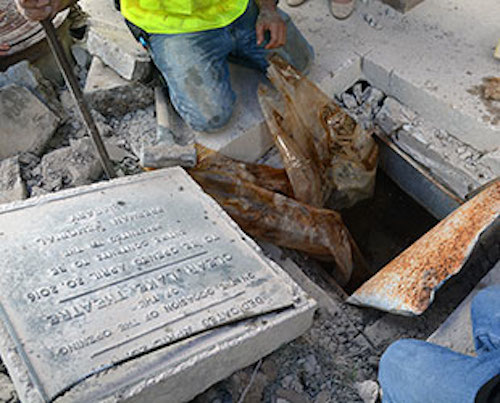 Construction workers opened the time capsule to find it filled with water, 50 years to the day after it was buried.
-
"When a time capsule is buried in the ground, it is going to absorb water," said Sarah Jackson, the archivist for Harris County. "We are not out in the desert. We are in Houston, Texas with lots of rain, high humidity, hurricanes — so this thing was probably flooded from the beginning."
According to the newspaper articles from the day, the time capsule helped to celebrate the opening of the Clear Lake Theatre, a movie house located just a few miles west of NASA's Manned Spacecraft Center (now Johnson Space Center). Actor Chuck Connors, best known for his role on the TV series "The Rifleman," and John "Shorty" Powers, NASA's original voice of Mission Control, were present for the grand opening.
Fifty years later, Milt Heflin, a former NASA flight director, joined library and city officials for the capsule's opening on Wednesday. The theater long closed, it was most recently converted into its third iteration of an asian restaurant, now also out of business.
. 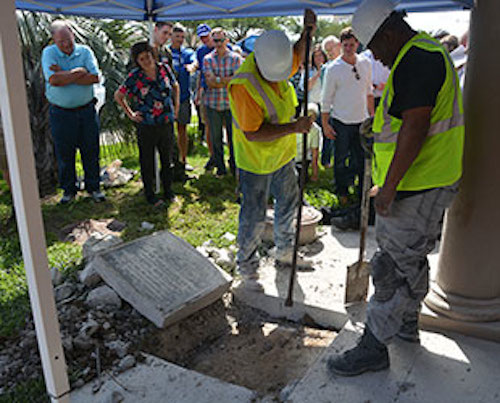 Spectators watch as workers use a pry bar to work their way into the Clear Lake Theatre time capsule buried in 1966.
-
Construction workers used a circular saw, sledge hammer and a pry bar to cut, slam and wedge their way through the thick cement layers and steel lid that covered the capsule. When the dust settled, the crowd leaned in only to see the water-filled opening in the ground.
Submerging their arms in elbow-deep, rust-colored water, workers lifted out stacks of wet newspapers, phone books and a 1966 state highway map, among other documents.
"The map can be salvaged," said Jackson. "It is small and easy to do. Maybe one section of the newspaper [can also be preserved] as an example, but I would not try to do the whole thing."
Missing from the time capsule's contents — at least on an initial inspection — was the artifact highlighted by the news reports 50 years ago.
. 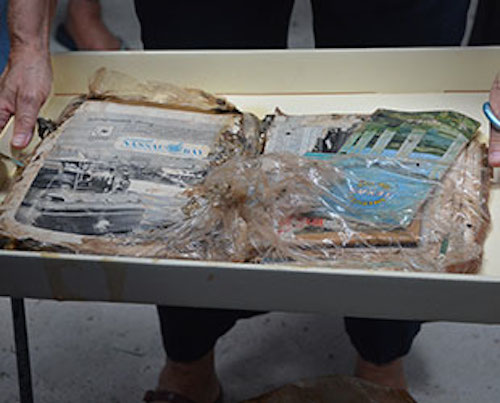 An American flag flown into space by astronaut Pete Conrad might still be found among the time capsule's contents.
-
"It may just be something very small, in here somewhere," said Jim Johnson, branch manager of the Freeman library, referring to an American flag that was described as having been flown into space by astronaut Charles "Pete" Conrad and then placed into the time capsule. "We may find it as we are sifting through it."
Update for April 21: The flag was found by Lauren Meyers, the archivist at the University of Houston-Clear Lake, after the contents of the time capsule were submerged in clean water to begin their conservation.
"That is probably better preserved than most anything else in here," said Jim Johnson with the Freeman Library.
The flag was accompanied by a letter in astronaut Charles Conrad's handwriting that stated: "This American flag was carried aboard Gemini V [5], 21 - 29 August 1965, for 120 revolutions of the Earth."
. 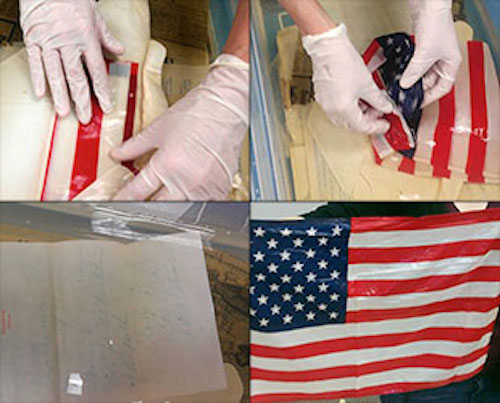 A U.S. flag flown on NASA's Gemini 5 mission is found among the time capsule contents. (Friends of Freeman Library/Brian Kissell)
If the flag is found and can be saved, it will join the Gemini model and whatever other artifacts can be conserved from the time capsule as a part of a new display at the Freeman Memorial Library.
Founded in 1964, the library was named in the memory of Theodore Freeman, the first U.S. astronaut to die while in service to the nation's space program. Freeman was killed when a goose flew into the port-side air intake of his NASA T-38 trainer, causing the jet to crash at Ellington Air Force Base (now Ellington Airport) in Houston.
Among the the time capsule's other contents was also said to be the speech that astronaut Charles Bassett delivered at the library's dedication ceremony for Freeman.
Quelle: CS
Raumfahrt
2180 Views
Created with page4