On Sept. 14, waves of energy traveling for more than a billion years gently rattled space-time in the vicinity of Earth. The disturbance, produced by a pair of merging black holes, was captured by the Laser Interferometer Gravitational-Wave Observatory (LIGO) facilities in Hanford, Washington, and Livingston, Louisiana. This event marked the first-ever detection of gravitational waves and opens a new scientific window on how the universe works.
Less than half a second later, the Gamma-ray Burst Monitor (GBM) on NASA's Fermi Gamma-ray Space Telescope picked up a brief, weak burst of high-energy light consistent with the same part of the sky. Analysis of this burst suggests just a 0.2-percent chance of simply being random coincidence. Gamma-rays arising from a black hole merger would be a landmark finding because black holes are expected to merge “cleanly,” without producing any sort of light.
. 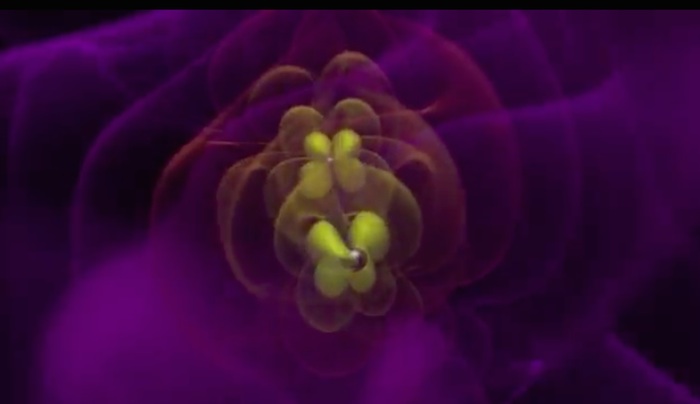 This visualization shows gravitational waves emitted by two black holes (black spheres) of nearly equal mass as they spiral together and merge. Yellow structures near the black holes illustrate the strong curvature of space-time in the region. Orange ripples represent distortions of space-time caused by the rapidly orbiting masses. These distortions spread out and weaken, ultimately becoming gravitational waves (purple). The merger timescale depends on the masses of the black holes. For a system containing black holes with about 30 times the sun’s mass, similar to the one detected by LIGO in 2015, the orbital period at the start of the movie is just 65 milliseconds, with the black holes moving at about 15 percent the speed of light. Space-time distortions radiate away orbital energy and cause the binary to contract quickly. As the two black holes near each other, they merge into a single black hole that settles into its "ringdown" phase, where the final gravitational waves are emitted. For the 2015 LIGO detection, these events played out in little more than a quarter of a second. This simulation was performed on the Pleiades supercomputer at NASA's Ames Research Center.
.
“This is a tantalizing discovery with a low chance of being a false alarm, but before we can start rewriting the textbooks we’ll need to see more bursts associated with gravitational waves from black hole mergers,” said Valerie Connaughton, a GBM team member at the National Space, Science and Technology Center in Huntsville, Alabama, and lead author of a paper on the burst now under review by The Astrophysical Journal.
Detecting light from a gravitational wave source will enable a much deeper understanding of the event. Fermi's GBM sees the entire sky not blocked by Earth and is sensitive to X-rays and gamma rays with energies between 8,000 and 40 million electron volts (eV). For comparison, the energy of visible light ranges between about 2 and 3 eV.
. 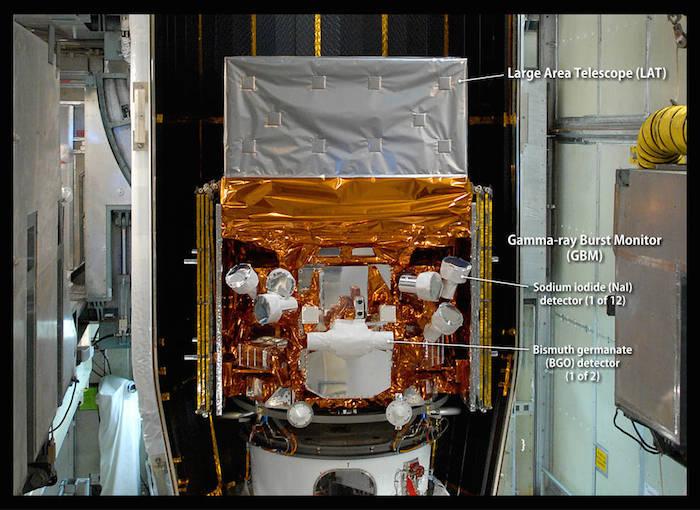 This image, taken in May 2008 as the Fermi Gamma-ray Space Telescope was being readied for launch, highlights the detectors of its Gamma-ray Burst Monitor (GBM). The GBM is an array of 14 crystal detectors.
Credits: NASA/Jim Grossmann
With its wide energy range and large field of view, the GBM is the premier instrument for detecting light from short gamma-ray bursts (GRBs), which last less than two seconds. They are widely thought to occur when orbiting compact objects, like neutron stars and black holes, spiral inward and crash together. These same systems also are suspected to be prime producers of gravitational waves.
"With just one joint event, gamma rays and gravitational waves together will tell us exactly what causes a short GRB," said Lindy Blackburn, a postdoctoral fellow at the Harvard-Smithsonian Center for Astrophysics in Cambridge, Massachusetts, and a member of the LIGO Scientific Collaboration. "There is an incredible synergy between the two observations, with gamma rays revealing details about the source's energetics and local environment and gravitational waves providing a unique probe of the dynamics leading up to the event." He will be discussing the burst and how Fermi and LIGO are working together in an invited talk at the American Physical Society meeting in Salt Lake City on Tuesday.
Currently, gravitational wave observatories possess relatively blurry vision. This will improve in time as more facilities begin operation, but for the September event, dubbed GW150914 after the date, LIGO scientists could only trace the source to an arc of sky spanning an area of about 600 square degrees, comparable to the angular area on Earth occupied by the United States.
“That's a pretty big haystack to search when your needle is a short GRB, which can be fast and faint, but that’s what our instrument is designed to do," said Eric Burns, a GBM team member at the University of Alabama in Huntsville. "A GBM detection allows us to whittle down the LIGO area and substantially shrinks the haystack."
. 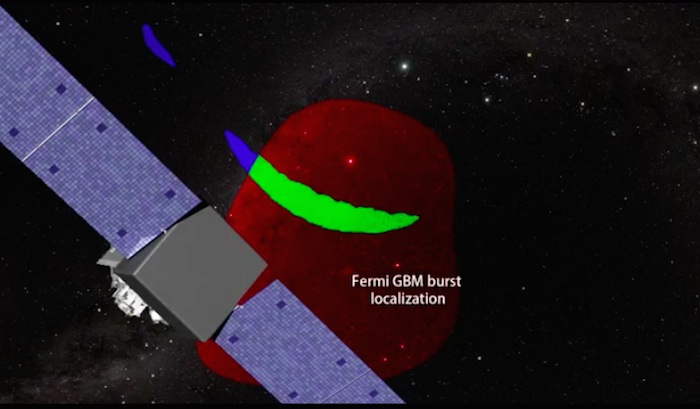 Fermi's GBM saw a fading X-ray flash at nearly the same moment LIGO detected gravitational waves from a black hole merger in 2015. This movie shows how scientists can narrow down the location of the LIGO source on the assumption that the burst is connected to it. In this case, the LIGO search area is reduced by two-thirds. Greater improvements are possible in future detections.
.
Less than half a second after LIGO detected gravitational waves, the GBM picked up a faint pulse of high-energy X-rays lasting only about a second. The burst effectively occurred beneath Fermi and at a high angle to the GBM detectors, a situation that limited their ability to establish a precise position. Fortunately, Earth blocked a large swath of the burst’s likely location as seen by Fermi at the time, allowing scientists to further narrow down the burst’s position.
The GBM team calculates less than a 0.2-percent chance random fluctuations would have occurred in such close proximity to the merger. Assuming the events are connected, the GBM localization and Fermi's view of Earth combine to reduce the LIGO search area by about two-thirds, to 200 square degrees. With a burst better placed for the GBM’s detectors, or one bright enough to be seen by Fermi’s Large Area Telescope, even greater improvements are possible.
The LIGO event was produced by the merger of two relatively large black holes, each about 30 times the mass of the sun. Binary systems with black holes this big were not expected to be common, and many questions remain about the nature and origin of the system.
Black hole mergers were not expected to emit significant X-ray or gamma-ray signals because orbiting gas is needed to generate light. Theorists expected any gas around binary black holes would have been swept up long before their final plunge. For this reason, some astronomers view the GBM burst as most likely a coincidence and unrelated to GW150914. Others have developed alternative scenarios where merging black holes could create observable gamma-ray emission. It will take further detections to clarify what really happens when black holes collide.
Albert Einstein predicted the existence of gravitational waves in his general theory of relativity a century ago, and scientists have been attempting to detect them for 50 years. Einstein pictured these waves as ripples in the fabric of space-time produced by massive, accelerating bodies, such as black holes orbiting each other. Scientists are interested in observing and characterizing these waves to learn more about the sources producing them and about gravity itself.
NASA's Fermi Gamma-ray Space Telescope is an astrophysics and particle physics partnership, developed in collaboration with the U.S. Department of Energy and with important contributions from academic institutions and partners in France, Germany, Italy, Japan, Sweden and the United States.
Quelle: NASA
Astronomie
2250 Views
Created with page4