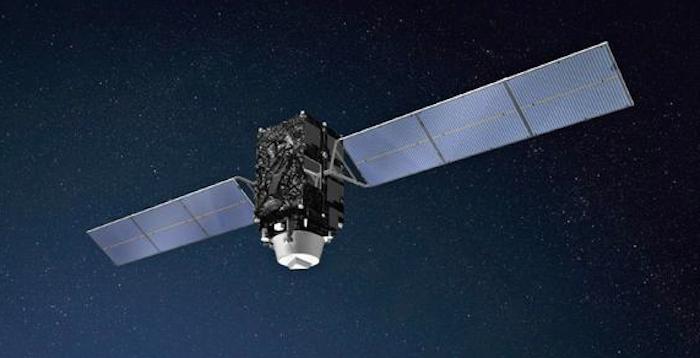 Japan's government plans to use Michibiki satellites, like the one in this rendering, to relay texts between disaster survivors and authorities. (Courtesy of JAXA)
-
TOKYO -- Japan plans to build a satellite-based communications network that would fill in when a natural disaster knocks out regular systems.
Several GPS satellites would transmit text data between survivors, municipalities and other parties. The goal is to avoid a repeat of the situation that unfolded after the March 2011 earthquake and tsunami hit the country's northeast. The disaster wiped out 29,000 cellular base stations and some 1.9 million landlines, making it extremely difficult for authorities to grasp conditions on the ground and coordinate rescue teams.
Learning from this experience, the government intends to employ a set of satellites that go by the name Michibiki. The first of these is already in orbit, complementing GPS satellites operated by the U.S. Department of Defense. Three more Michibikis are to be launched by the first half of fiscal 2017 -- the year through March 2018 -- followed by another trio by fiscal 2023.
This fleet will give Japan its own accurate GPS system. But the satellites can also function as relay stations. The government will use this feature to connect disaster victims' smartphones with data terminals at the Japan Meteorological Agency, municipal offices, fire stations, hospitals and other organizations, bypassing ground-based communications infrastructure.
No one left behind
Communications will be limited to text data. When a survivor requests help, the information will be relayed to a command center via the satellites. The message will then be passed on to local authorities and rescue workers.
The satellite network will also relay earthquake warnings and evacuation advisories to individuals in remote areas.
Not everyone has a phone or other device that can communicate with satellites, but Japan figures it is just a matter of time. The government hopes to introduce the system on a trial basis in fiscal 2018.
For starters, the central prefecture of Wakayama will carry out a feasibility test this autumn, under the scenario of a massive earthquake and tsunami. The prefectural government will communicate with several evacuation centers via a router, which will stand in for a satellite.
Quelle: NIkkei Asian Review
Raumfahrt
« Zum vorherigen Eintrag Zum nächsten Eintrag »
2497 Views
Created with page4