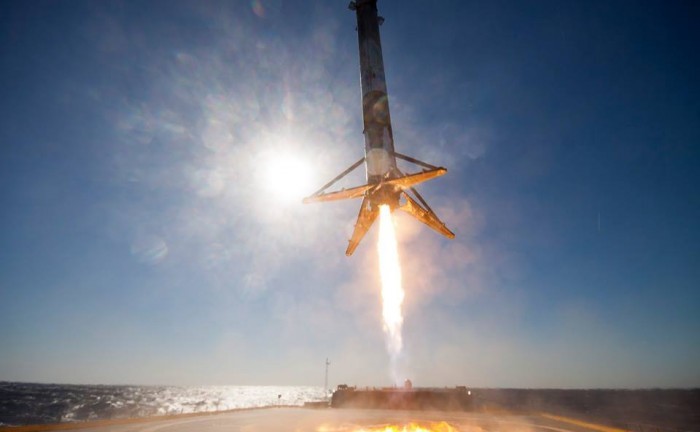 Remote camera photo from “Of Course I Still Love You” droneship of SpaceX Falcon 9 first stage landing following launch of Dragon cargo ship to ISS on CRS-8 mission. Credit: SpaceX
SpaceX has released a slew of up close photos showing the sensational “super smooth” touchdown last week of a Falcon 9 booster on a tiny droneship at sea located several hundred miles (km) off the East coast of Florida.
“This time it really went super smooth,” Hans Koenigsmann, SpaceX VP of Flight Reliability, told Universe Today in an exclusive post landing interview at the NorthEast Astronomy and Space Forum (NEAF) held in Suffern, NY. “The rest is history almost.”
The dramatic propulsive descent and soft landing of the SpaceX Falcon 9 first stage took place last Friday, April 8 about 9 minutes after blasting off from Cape Canaveral Air Force Station at 4:43 p.m. EDT on the Dragon CRS-8 resupply mission for NASA to the International Space Station (ISS).
The breathtaking new photos show the boosters central Merlin 1D engine refiring to propulsively slow the first stage descent with all four landing legs unfurled and locked in place at the bottom and all four grid fins deployed at the top.
Why did it all go so well, comparing this landing to the prior attempts? Basically the return trajectory was less challenging due to the nature of the NASA payload and launch trajectory.
“We were more confident about this barge landing,” Koenigsmann told me at NEAF.
“I knew the trajectory we had [for CRS-8] was more benign, although not super benign. But certainly benigner than for what we had before on the SES-9 mission, the previous one. The [droneship] landing trajectory we had for the previous one on SES-9 was really challenging.”
“This one was relatively benign. It was really maybe as benign as for the Orbcomm launch [in December 2015] where we had the land landing.”
Read my Orbcomm story here about history’s first ever successful land landing of a spent SpaceX Falcon 9 booster.
. 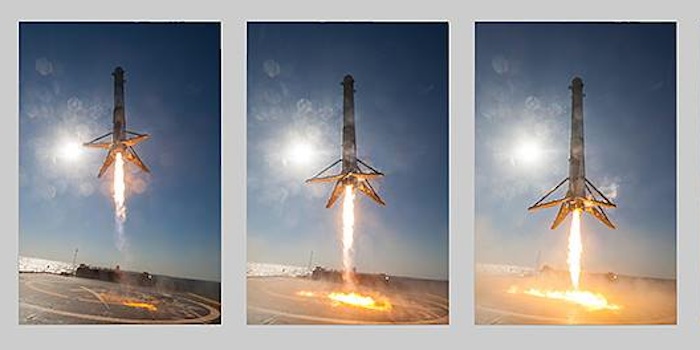 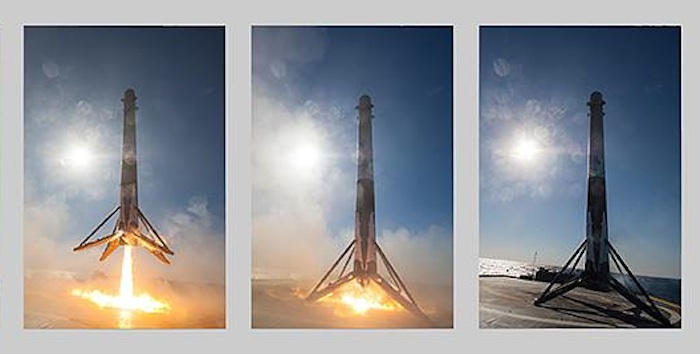 Timelapse sequence shows dramatic landing of SpaceX Falcon 9 first stage on “Of Course I Still Love You” droneship as captured by remote camera on 8 April 2016. Credit: SpaceX
The diminutive ocean landing platform measures only about 170 ft × 300 ft (52 m × 91 m). SpaceX formally dubs it an ‘Autonomous Spaceport Drone Ship’ or ASDS.
The ocean going barge is named “Of Course I Still Love You” after a starship from a novel written by Iain M. Banks.
It was stationed some 200 miles off shore of Cape Canaveral, Florida surrounded by the vastness of the Atlantic Ocean.
. 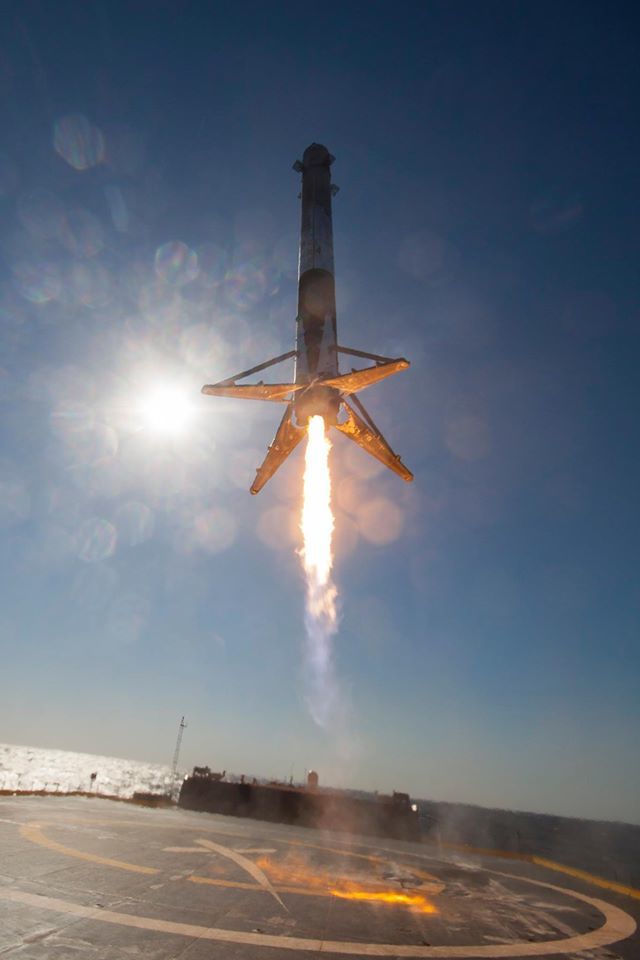 Remote camera photo from “Of Course I Still Love You” droneship of Falcon 9 first stage landing following launch of Dragon cargo ship to ISS on CRS-8 mission on 8 April 2016. Credit: SpaceX
“The CRS-8 launch was one of the easiest ones we ever had.”
The revolutionary rocket recovery event counts as the first successful droneship landing of a rocket in history and is paving the way towards eventual rocket recycling aimed at dramatically slashing the cost of access to space.
The final moments of the 15 story tall boosters approach and hover landing was captured up close in stunning high resolution imagery recorded by multiple remote cameras set up right on the ocean going platform by SpaceX photographer Ben Cooper.
Landing the booster on land rather than at sea was actually an option this time around. But SpaceX managers wanted to try and nail a barge at sea landing to learn more and validate their calculations and projections.
“As Elon Musk said at the post-landing press conference of Friday, we could have actually come back to land- to land this one on land,” Koenigsmann elaborated.
“But we decided to land on the drone ship first to make sure that on the droneship we had worked everything out!”
“And that’s exactly what happened. So I felt this was only going out a little bit on the limb,” but not too much.”
Before the CRS-8 launch, Koenigsmann had rated the chances of a successful landing recovery rather high.
Three previous attempts by SpaceX to land on a barge at sea were partially successful, as the stage made a pinpoint flyback to the tiny droneship, but it either hit too hard or tipped over in the final moments when a landing leg failed to fully deploy or lock in place.
“Everything went perfect with the launch,” Koengismann said. “We just still have to do the post launch data review.”
“I am really glad this went well, especially after the mishap on the last Dragon launch [in June 2015].”
Quelle: UT
Raumfahrt
« Zum vorherigen Eintrag Zum nächsten Eintrag »
1914 Views
Created with page4